Charters Towers’ remaining Good Samaritan Sisters will close their convent doors at the end of the month after 117 years of service.

The sisters will withdraw from the Charters Towers community from May 28.

Sister Ita Stout, Sister Marion Firth and Sister Patricia Comerford, who have served the Townsville diocese for 55 years collectively, are the last of the Good Samaritans to work and pray in Charters Towers since the community first arrived in 1900.

Sister Ita Stout, born-and-bred in Charters Towers, is sad to be leaving her hometown.

“I thought I would go full circle and be buried here, but it’s not to be,” Ita said.

Following the decision for the Charters Towers convent to close, Ita will spend the next phase of religious life in Brisbane with the Lourdes Hill community.

It is the second time Ita has had to say farewell to a north Queensland community, having left the Hughenden convent with Sister Patricia Comerford in 2014 when the Good Samaritans withdrew from that town.

Ita said she believed if there were more young women entering the order she would have stayed in her hometown.

“I wouldn’t be leaving if we had sisters to take our place,” she said.

While the declining number of women entering apostolic orders like the Good Samaritans is likely the reason for the departure, it was the complete opposite in Queensland in the 1900s.

The Good Samaritan Sisters, founded by Sydney Archbishop John Bede Polding, came to Charters Towers in 1900 to support a growing number of Catholics.

The Sisters of Mercy were already established as the first women religious community in the town, moving up from Rockhampton in February of 1892.

It was 20 years after gold had been discovered in Charters Towers and more religious were needed to serve the rapidly growing population.

In 1899, Bishop Joseph Higgins of Rockhampton asked for a group of Good Samaritan Sisters to help in the schools.

Eleven Good Sams left Sydney on February 23, 1900, on the Aramac, arriving into Keppel Bay, near Rockhampton, before travelling with the bishop to Charters Towers.

Their first mission was to look after a mammoth 700 enrolled children at the school.

Since that day, 222 Good Samaritan Sisters have lived and ministered in the town for 117 years, many finding their vocations in the schools.

Sister Marion Firth, who met the Good Samaritan Sisters in Townsville, knew she wanted to join the order at 14 years of age.

“I was educated by the Good Samaritans in Townsville, and I made the decision to join them at 14,” she said. “I entered the convent at 18.”

Her father and grandmother were both from Charters Towers, having settled Mount Surprise in the 1850s.

She will move back to Townsville when the convent doors close at Charters Towers.

“It’s a sad day that the sisters are withdrawing, and the fact that we’ve been here for all these years and educated so many people is big in itself,” Marion said.

“Charters Towers was a country town built on gold and as a cosmopolitan community, from the beginning it was drawing people who were real battlers.

“The people who live here are long-stayers and love this town and the story of their town.”

There is no doubt that the Good Samaritan Sisters’ legacy is woven deeply into the Charters Towers story.

Sister Patricia Comerford has loved journeying with the “gorgeous people in the outback”, having lived in Queensland since 1969.

She entered the convent 71 years ago and, at 90, still has energy to minister to people in Charters Towers.

“When you get to my age, the mission is walking with people,” Patricia said.

“Older people need someone to talk with, and I’m available as a listener.”

She was three years old when she first met the Good Samaritan Sisters at music lessons.

“I was attracted to them and the work they did,” Patricia said.

Despite having to leave Charters Towers, she said her religious vocation was not over, and she would continue walking with people in her new Wynnum West community.

“There’s always a job for you to do,” Patricia said. “It doesn’t matter how old you are, you can still be useful for the Lord.”

Congregational leader Sister Clare Condon, who was school principal in Charters Towers for three years, said the 117 years the Good Samaritans gave to the community should be celebrated.

“The women who went there in 1900, the eldest was 34 and the others were not finally professed, with the youngest at 22,” Clare said.

“Another key period was in World War II, which became a real challenge for the people because they thought the war was going to come on their doorstep.

“Over all that time, I’m very proud of what the sisters have given to that community.”

Columba Catholic College will unveil a memorial to the Good Samaritan Sisters on Friday (May 26), followed by a ceremony at the Charters Towers cemetery where six sisters are buried.

The sisters will open the convent on May 27 for parishioners, family and friends to visit, followed by an official closing ritual.

Townsville Bishop Tim Harris will celebrate a farewell Mass for the sisters on May 28 at St Columba’s Church before the sisters officially leave the town.

This article, written by Emilie Ng, was first published in The Catholic Leader on May 22, 2017. 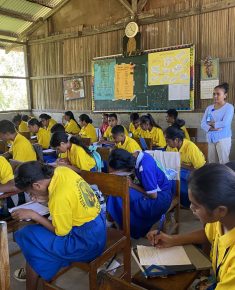 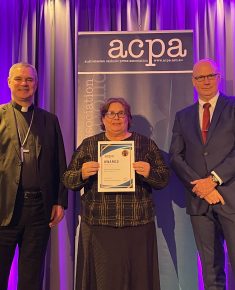