By the mid-1800s European settlement in Sydney was rapidly expanding while the indigenous communities were greatly devastated. For some, Sydney was a place of opportunity and excitement. For others, life was extremely hard. Women in particular, struggled to support their families with no social welfare, no state education and often, nowhere to live.

When John Bede Polding arrived in Australia 1834, he quickly set about providing assistance for these women, and for others on the margins of society – indigenous people, convicts and abandoned children. With his support, the Sisters of Charity began the House of the Good Shepherd under the leadership of Mother Scholastica Gibbons. When this group of women was no longer able to maintain the refuge, Polding gathered five women together, and formed a new Australian religious congregation.

On the 2nd of February 1857, Agnes Clark, Margaret Byrne, Mary Anne Adamson, Agnes Mary Hart and Margaret Clark became the first of Archbishop Polding’s new Australian Congregation. Under the guidance of Scholastica Gibbons, they became known as The Sisters of the Good Samaritan of the Order of Saint Benedict. Archbishop Polding wrote part of the Rule for the Sisters himself, saying:

The name indicates the scope, since the Religious are called to imitate the charity of the kind Samaritan who was moved to pity the poor wounded man, and having poured oil and wine into his wounds to heal him, afterwards conveyed him to a place of security. In like manner, the Religious are to use all gentleness and compassion for the unhappy whom they are to tend…Therefore as directed by their Superiors the Sisters are to teach in schools, visit and assist the sick in their own homes and in hospitals, to instruct ignorant persons in the faith, to conduct orphanages, to reform the lives of penitent women and to apply themselves to every other charitable work.
– Rules of the Institute of the Oblate Sisters of the Good Samaritan of the Order of St Benedict in the Archdiocese of Sydney, Australia: Scope and Character of the Institute 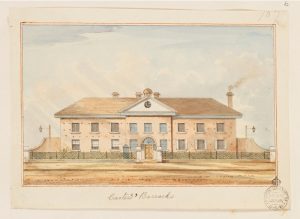 In the early years, Scholastica Gibbons played a crucial role in the life of the congregation. Under Polding’s direction, she encouraged the Sisters in their ministries. The Sisters began working in a women’s refuge in Carters’ Barracks, an old building once used as a prison in Pitt Street, Sydney. Some of the Sisters walked many miles in their efforts to tend the sick and those in need. They became well-known for talking to people outside the confines of their convent, most unusual at the time. 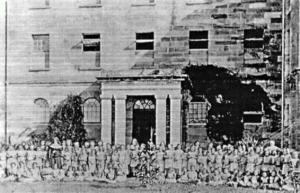 In April 1859, three Good Samaritan Sisters from the Pitt Street refuge were appointed to the positions of matron, sub-matron and teacher at the Catholic Orphanage at Parramatta, also known as the Catholic Orphan School. The Sisters found themselves educating and caring for over 300 children.

The orphanage was dingy, overcrowded, unhygienic, and often stinking due to the lack of lavatories and the sewer that often drained from the Lunatic Asylum next door into the orphanage courtyard. The Sisters had no control over the number of, or which children who ended up with them. In one report it was noted that the ‘children were clean but without boots’. While there were indeed orphans, many were the children of mothers in the Lunatic Asylum or in gaol, some were runaways from drunken and violent parents, others had been through significant trauma, and had seen great poverty, violence and death. Few had experienced ‘normal’ family life.

As well as local visits, some of the Sisters began to accompany Polding on his missionary work. These were long and difficult journeys, often by horse and cart or by ship. The Sisters’ main role was to prepare children for the sacraments of Baptism, Eucharist and Confirmation.

This meant the Sisters became well-known throughout the regional districts, and many new members of the Congregation came from these areas. It also meant that the Sisters were asked to open schools, with education becoming one of their main ministries. The first school was set up in Sussex Street in the heart of Sydney in 1861, with many others following across Australia. 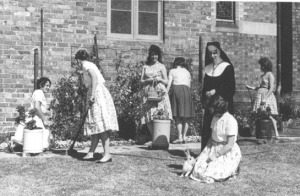 The work begun at the refuge in Pitt Street was continued at St Magdalen’s Retreat, Tempe, in Sydney, where the Sisters looked after girls committed to their care by the courts. Opened in 1887, Tempe, later known as the Good Samaritan Training Centre, closed almost 100 years later in 1983.

The Sisters cared for unmarried mothers and women who were seen to be at risk. The Sisters provided accommodation for over 40 women and built laundries which provided work for the residents. By 1900, over 100 people worked a daily routine in the laundry.