A Benedictine Way of Life 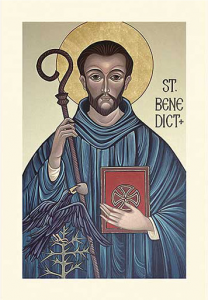 St Benedict was born in Norcia, Italy, around the year 480. His father was a nobleman, and he had a twin sister who was named Scholastica. Benedict came to reject the licentiousness and moral depravity of the then Roman society, and chose to live for three years in a cave in the wilderness at Subiaco.

There he sought to find God through prayer and a life of simplicity within a community. He later moved to Monte Cassino where after long meditation on the Scriptures, wrote the Rule of Benedict, which continues to inspire people throughout the world to this day.

Central to the Rule are the themes of prayer, Christ and community. Filled with Scriptural texts, and based on the values of humility and obedience, it is a guide for living a balanced, simple, and prayerful life. Benedict called it ‘a little rule for beginners’, and it survives as a masterpiece of spiritual wisdom which is as meaningful today as it was when it was written in the sixth century.

All guests who present themselves should be welcomed as Christ.
– RB 53:1

Benedict’s approach to seeking God was both sensible and humane. It rests on being faithful to finding God in the ordinary circumstances of daily life within a community. Work was important, as was communal prayer (Opus Dei), as was leisure – which he saw in terms of Lectio Divina. Benedict envisioned a balanced life of prayer and work as the ideal.

Your way of acting should be different from the world’s way;
the love of Christ must come before all else.
– RB 4:20

The importance of community life is foundational to Benedict’s Rule. Prior to Benedict, holiness was perceived as being separated from the world, whereas Benedict wrote for monks living together in community. Benedict’s gift was to understand that each person’s weaknesses are best confronted by living side by side with other human beings. St Benedict taught that growth comes from accepting people as they are, not as we would like them to be.

Though Benedict was no idealist with respect to human nature, he understood that the key to spiritual growth lies in recognising the inalienable human dignity of each and every person. That a rule written for monastic life more than 1,500 years ago has such currency and agency in 21st century living is testament to St Benedict’s profound wisdom and insight into the human condition.

Let peace be your quest and your aim.
– RB Prol:17