HomeWho We AreOur StoryOur Neighbours in the Asia Pacific

Our Neighbours in the Asia Pacific 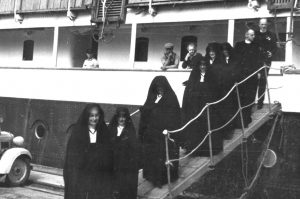 Less than a hundred years after being founded, the Congregation answered a request for help from overseas for the first time, when in 1948, six Sisters went to Japan. Bishop Yamaguchi of Nagasaki had written to ask for assistance in reconstructing his diocese which had been devastated by the atomic bomb. He needed a community of Sisters to set up a clinic and to establish schools. The Sisters responded with overwhelming generosity. In the words of Mother Oliverio Murphy, Congregational Leader at the time:

The sisters opened a dispensary, ‘pouring oil and wine’ into the wounds of the victims of the atomic bomb. In less than five years they left Nagasaki and went to Sasebo and Nara. Our Lady of the Cherry Blossom Kindergarten and Seiwa High School in Sasebo were established in 1952-53, and remain thriving centres of education. A community of Sisters continues to live in Japan today. 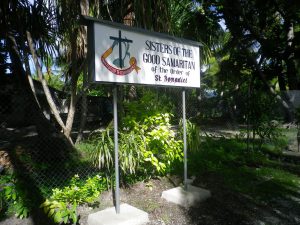 In 1991 the Sisters responded to another invitation, this time from the Bishop of Kiribati. Again, the Congregation answered the call to be neighbour with generosity and compassion. After more than 25 years of Good Samaritan life in Kiribati, there are now six i-Kiribati Good Samaritan Sisters living on the tiny coral atoll of Tarawa. 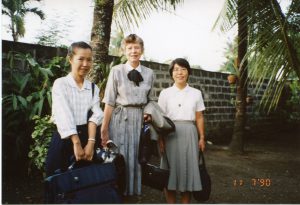 In the 1980s, the Catholic Religious of Japan, though few in number, had an increasingly strong desire to stand in solidarity, and to engage in a process of reconciliation with the people of the Philippines for the atrocities committed in World War II. After a long period of discernment, two Japanese Good Samaritan Sisters formed a community in Bacolod on the island of Negros.

Today, two communities in Bacolod have Sisters from the Philippines, Japan and Australia. Their life and ministry is very much a partnership of living and sharing resources, supported by the Bacolod Fund from Japan, and the Good Samaritan Foundation in Australia.