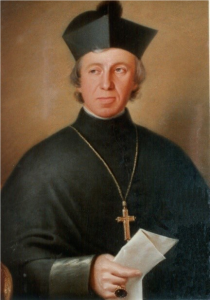 John Bede Polding was born in Liverpool, England in 1794. Both of his parents had died by the time he was nine years old. He was taken into the care of his uncle, a Benedictine monk, who arranged his education with the Benedictine nuns in Liverpool, and then at St Gregory’s in Shropshire. He entered Downside Abbey and was ordained in 1819.

Polding had various roles while at Downside, and was a great loss to his community when he was made Bishop of New Holland and Van Diemen’s Land.

Arriving in Sydney in 1835, Polding quickly showed his compassion, especially for convicts, indigenous people and destitute women. He became known as a pastoral leader, who rode thousands of miles on horseback to visit Catholic families across Australia, and was often away from Sydney for months at a time. In 1839 the Weekly Orthodox Journal quoted a letter from Sydney:

His labours are incessant, his zeal unbounded.
Protestants as well as Catholics revere him as a saint.

John Bede Polding retired in January, 1874 and died on March 16, 1877. His funeral was attended by over 100,000 people. Fr Sheehy OSB who had known Polding for most of his life wrote at the time:

His life was full of energy and movement and an all-embracing love. His last years were full of mercy, compassion and a most divine tenderness. What helped him to do this was the fact that he genuinely loved Australia and her people, and was determined from his earliest days in the colony to be an Australian himself.
– Sourced from the Good Samaritan Archives 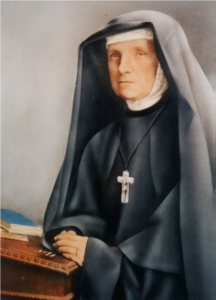 Mother Scholastica was born Geraldine Gibbons in Kinsale, County Cork, Ireland in 1817. In 1834, she with her family immigrated to Australia. She was professed as a Sister of Charity in 1843 and was elected their Mother Superior in 1856. In 1857, she worked with Archbishop Polding to establish the first congregation of Catholic religious women to be founded in Australia. In the same year, Mother Scholastica was overseeing the opening St Vincent’s Hospital, which continues to be a thriving work of the Sisters of Charity today.
The commitment of the Sisters of the Good Samaritan to those who were less fortunate in the fledgling colony of Sydney was quickly evident, with early works including the House of the Good Shepherd for destitute women in Pitt Street and the Catholic Orphan School in Parramatta.
Mother Scholastica was known as a kind and compassionate woman, and was greatly loved by her novices. She always remained a Sister of Charity, finishing her time as Mother Superior of the Sisters of Charity in 1859 and for the Sisters of the Good Samaritan in 1876.
Scholastica went to Hobart and worked in the Sisters of Charity Refuge until 1885, when, ‘unable to find any peace’, she returned to Rosebank Convent after much pleading from her former novices. She died at the Good Samaritan Convent, Marrickville on 15th October 1901. Two religious congregations continue to follow her path of compassion and commitment.⁶

Much has been written of Scholastica in the Congregational Annals and Books of Happenings:

She was a woman of great energy and trust in God –
full of love of God and her neighbour, especially the poor women who looked on her and loved her as Mother.

It was nothing for her to take the blankets of her bed or the clothes that she wore and give them to the poor.

Rosebank, so much loved by Scholastica was her place of abode. Rising at 4am she would hasten to the Chapel arriving an hour before the community to pray. When Mass, Meditation and Thanksgiving were complete, she busied herself with serving breakfast to the children. Work of the humblest kind occupied her day and she was always working. Lowly duties, mundane and trivial, were but a part of the pattern she was weaving into a beautiful life now nearing its sunset.