Those most vulnerable are on front line of COVID-19 pandemic

A coalition of Catholic leaders has written to Australia’s Prime Minister, Scott Morrison, advocating for the most vulnerable people in the community to receive government support during the COVID-19 pandemic. Congregational Leader of the Sisters of the Good Samaritan Sister Patty Fawkner signed the letter on behalf of Sisters and Oblates.

Despite the PM’s promise that “we are all in this together” refugees, asylum seekers, holders of temporary and bridging visas, and migrants in vulnerable situations cannot receive government funding. The letter asks the Government to provide them with temporary access to a financial safety net, Medicare and adequate shelter if they are homeless.

Good Samaritan Sister Catherine Norman said these vulnerable people were often detained in situations worse than prisons. “The critically ill people who have been transferred to Australia on Medevac are in detention centres where they live in close quarters with little opportunity for social distancing and social support,” Sr Cath said. “These people are hidden. How many Australians know they are here and are still being detained?” 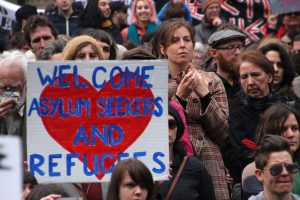 Others are permitted to live in the community but lack the resources for adequate food, education or housing. The pandemic has shown up social inequalities as demonstrated by a cluster of COVID-19 cases at a meat-processing facility in Melbourne.

“This is an example of people needing to work because they are employed casually, many on temporary visas and with no sick leave entitlements,” Sr Cath said. “They come to work not feeling well, work long hours in close proximity to others and often live in substandard shared accommodation.”

Public health is at risk when measures are not taken to protect everyone. In Singapore, COVID-19 cases have soared due to the spread of the disease in cramped migrant worker dormitories.

The Australian Government is yet to move on releasing people from immigration detention, but concerted advocacy continues. The Human Rights Law Centre is leading a legal challenge launched in the High Court on behalf of a person in immigration detention relating to COVID-19.

More than 100,000 refugees and people seeking asylum are now feeling the effects of the economic downturn in Australia. People on temporary and bridging visas are often employed on a casual or part-time basis. If they lose their jobs or have their hours reduced, they are not covered by the JobSeeker or JobKeeper subsidies.

“The Government is relying on migrant communities, non-government organisations and church groups to provide for these people,” Sr Cath said. “Many need ongoing support as they recover from the trauma of their past and find their way in a foreign community. They are often left for years without their claim for asylum being processed.”

Good Samaritan Sisters and Oblates support these women, men and children directly through visiting them, providing casework, sourcing resources and advocating for them with government departments. Partnerships in this work include Jesuit Refugee Service Australia, the Refugee Council of Australia, and the Catholic Alliance for People Seeking Asylum.

Sr Cath said the Good Samaritan Refugee and Asylum Seeker Support Group acknowledged the work already being done by Sisters and Oblates in direct contact with refugees and asylum seekers. “Everyone is encouraged to write to their members of Parliament, the Prime Minister and the Federal Opposition Leader on behalf of people seeking asylum and refugees.”