HomeLatest NewsCommemorating 145 years of prayer and presence in Windsor

Good Samaritan Sisters recently celebrated 145 years of ministering at Windsor in the Hawkesbury region of New South Wales. Since 1875, 256 Sisters have lived and ministered in the area.

On August 20 this year, 11 Good Samaritan Sisters in the Diocese of Parramatta gathered to commemorate the 142nd anniversary of the laying of the foundation stone of St Joseph’s Convent Chapel by Archbishop Vaughan.

To commemorate the occasion a liturgy was created using familiar psalms and the writings of the first Sisters at Windsor. It was an occasion for much joy and catching up during these COVID-19 times. The extensive grounds enabled safe distancing, storytelling and laughter. 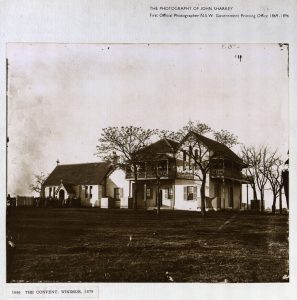 Australia’s first Catholic Archbishop, John Bede Polding, travelled to Windsor in April 1836, just months after his arrival in the colony. He wrote to his cousin at Downside:

“I went this Sunday before last to Windsor, and celebrated Mass in the temporary Chapel there. It was a barn, and will be one again, made of slabs. Windsor is situated on a long-backed eminence on a flat country, well cleared and cultivated; the vicinity is beautiful.”

In 1859, Good Samaritan Sisters accompanied Polding on his missionary journeys throughout the Hawkesbury, staying in private homes and preparing children and adults for the sacraments.

In 1874, Fr Austin Sheehy OSB became Pastor of Windsor Parish, which included Richmond, Kurrajong and Wisemans Ferry as well as the smaller stations of Riverstone, Nelson and Cattai.

By the end of 1875 a community of two sisters was ministering in Windsor. An old hotel, vacant for a several years and believed to be haunted, was secured for 12 months and the Sisters took up residence. The following year, another larger house was rented for £40 per year and the Sisters welcomed some boarders.

In June 1878, a new presbytery was completed and the old presbytery became St Joseph’s Convent. Lovely stories abound of the pastoral care shown by Fr Sheehy and the early priests to the Sisters. When the Sisters moved to the new convent the priests worked with the men from early morn until night carting furniture, setting up beds and providing scones and milk for the Sisters.

These were happy days for the Sisters, although they were not without trials. At all times they were supported by the love and helpfulness of the people and priests of the Windsor district. 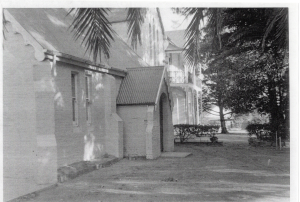 Esther and James Cassidy conducted the first Catholic school in Windsor from 1833-1844. This was the beginning of St Matthew’s Primary School, which continued to flourish until the Public Instruction Act of 1880, which stopped all government aid to denominational schools.

Subsequently, the Sisters took charge of St Matthew’s School in addition to St Joseph’s High School, which had opened in 1882 and became a boarding and day school for girls.

The Benedictine ideal in education has included in its scope the fashioning of the young mind to a love of the beautiful and the good, as well as to a keen pursuit of the truth. The Sisters were eager to follow in the path of their Benedictine heritage. The teaching of music, art and a love of literature formed an intrinsic part of the education they offered to their students.

The Sisters had a continuous association with St Matthew’s School from 1882 until 1990. It is now a parish primary school in the Diocese of Parramatta. St Joseph’s High School closed in 1972 and in 1976 it was decided to demolish the old St Joseph’s convent and rebuild. The chapel was preserved and is attached to a new smaller convent.

Today there are two Sisters who continue to sing the psalms in the old chapel and are involved in spiritual direction and pastoral care in St Matthew’s Parish. There are three Good Samaritan Sisters, Carmel Bambridge, Maree Stanley and Monica Armstrong, who are ex-students of St Joseph’s School.

Compiled with extracts from the archives of the Sisters of the Good Samaritan.

Published in The Good Oil, September 2020.