This year’s Christmas stamp issue by Australia Post focuses on Australian themes. Paintings by the late artist and sculptor Leopoldine ‘Poldi’ Mimovich OAM have been reproduced on two religious stamps. Both designs combine traditional iconography with native fauna and flora.

Leopoldine Mimovich was born in 1920 in Neumarkt in the Italian Tyrol. In 1949, she and her husband Ljubisa Mimovich joined the tide of European immigrants who sought a new life in Australia in the post-war years. 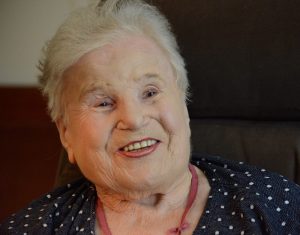 Her work is found in parks, homes, churches, schools and convents throughout Australia. She has a strong connection to the Good Sams through her friendship with the Sisters who have collected her works over many years.

Sister Jill O’Brien SGS is a member of the National Liturgical Architecture and Art Council. Writing for the Australian Catholic Liturgical Art website, Jill said Leopoldine Mimovich had established her place as an accomplished sculptor whose work reflected her Austrian origins and Catholic background. “She built on an early 20th Century European tradition and over time developed a more stylised and modern body of work.”

Mimovich expanded our cultural and religious experience. “Her small crucifixes, madonnas and images of the saints have found their way into our homes,” Jill said. 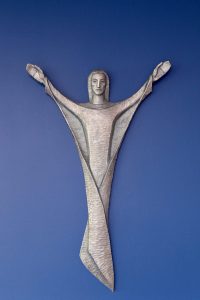 “Wedding, baptismal and first communion gifts were available at her Miller Road studio in the Melbourne suburb of Kew. This meant there was more on offer than mass-produced plaster religious images.”

When the Sisters established a new community at Nara in Japan, Sister Sonia asked Jill to find a piece of religious art for the convent. Poldi’s sculpture The Hospitable Christ was chosen and shipped from Australia. The sculpture accompanied the Sisters when they moved to Osaka this year and is now in the entrance of the chapel in their new residence Domus Gratiae.

Over many decades, the Good Sams have been associated with Coragulac in regional Victoria. The local church commissioned a Leopoldine Mimovich life-size carving of their patron St Brendan in his leather boat. 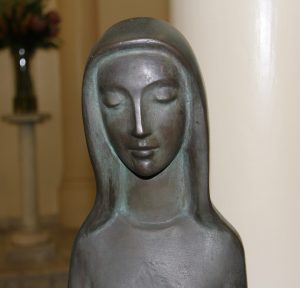 “Poldi wanted Australia to have a home-grown religious art culture and not one that was derivative of the ‘holy picture’ type that we kept repeating,” Rita said.

“Her sculptures and paintings of Christ, Mary and Joseph in native wood and bronze had strong facial features that were combined with an extraordinary tenderness of expression.

“Her bodily depictions of Christ conveyed graphically both his bodily suffering and his ascension to glory.”

For 15 years, Rita lived and ministered in Timor-Leste before returning to Australia in 2015. “Poldi was a woman of great compassion and took great interest in my work in East Timor,” Rita said.

“She donated a bronze wall sculpture of Christ of the Ascension for me to give to the local Timorese people because she was so pleased they had been able to come through their period of brutal oppression. I presented it to the community of Railaco, Ermera, on her behalf. 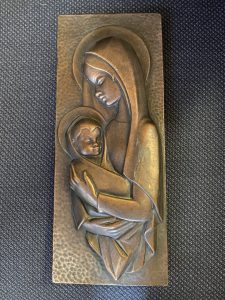 “Her Australian nativity sculptures with their delightful array of native flora and fauna are genuine evidence of Poldi’s love of her adopted land.”

Mimovich received numerous awards, including the Order of Australia Medal for services to sculpture. She died on Christmas Day, 2019. Her crucifixes grace the walls of the Mawson Inter-Denominational chapel in the Antarctic and the United Nations building in New York. Other works are in Timor-Leste, England, the US, Germany, Japan, Korea, Honolulu and New Guinea.

Published in The Good Oil, November 2020.