HomeLatest NewsWomen come together to raise their prophetic voice

As women call for a greater voice and fairer representation in the leadership of the Catholic Church, three forums where their voices will be heard are taking place this month.

‘Sister, bring your truth to light’ was the theme for an online meeting of prayer, reflection and honest prophetic voice of religious sisters hosted by Voices of Faith and Catholic aid agency missio Aachen on International Women’s Day on March 8.

Congregational Leader Sister Patty Fawkner SGS joined women religious who shared their experience and wisdom on obedience. Reflecting on the deep spiritual significance of this vow, women from across the globe spoke of how often it was misunderstood, abused and cynically used against them. 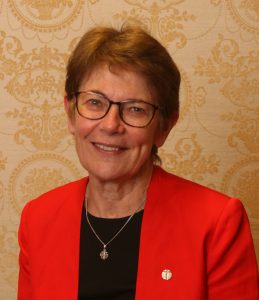 “As a woman who follows the Rule of Benedict, I reclaim the root meaning of obedience: to hear, to listen,” Patty said. “I try and ‘listen with the ear of my heart’, the opening words of Benedict’s Rule.

“Our congregation has moved from a paradigm of obedience seen as unquestioning subservience, domination and power over, to a paradigm of mutuality, adulthood, servant leadership and power with. Thirty-six years ago, we abolished the role of the local superior, thus calling all community members to co-responsibility and adulthood.”

Patty believes the Church has much to learn from religious women’s practice of obedience. “More than anything, the Church must learn to listen, despite Cardinal Sarah saying last year that ‘the Church is not made to listen; she is made to teach.’ The Church would flourish and better fulfill its mission if it listened to more than 50% of its membership – to women.”

A new podcast was launched on International Women’s Day by Women and the Australian Church and The Grail in Australia. Australian Women Preach is running during the 30 weeks leading into the Australian Catholic Church’s Plenary Council in October 2021.

Sr Patty Fawkner will take part in this series, which aims to highlight and share the voices of women breaking open the Word of God in ways that are meaningful to people today.

Each Monday an episode will be released with preaching on the following Sunday’s Gospel. Patty has been invited to preach on the Gospel for Easter Sunday.

Catholic women are invited to participate in an online national consultation on March 27 to articulate and celebrate their contribution and vision for the mission of the Church in Australia.

Archbishop Christopher Prowse, Chairperson of the Bishops Commission for Evangelisation, Laity and Ministry, and Bishop Michael Morrisey, Bishops Delegate for Women, will be present to hear the voice of Catholic women.

Clara Geoghegan is the executive secretary of the Bishops Commission and one of the organisers. She said women she had spoken with were supportive of a national conversation.

“Women are looking forward to the opportunity to speak with the two bishops and with one another and, as invited by the great document Gaudium et Spes, to share their joys and their hopes, their griefs and their anxieties for the Church in Australia,” Clara said.

The consultation will take place on Saturday March 27 from 2pm-4pm AEDT. Participants must register to attend by 4pm on Friday March 26 using this form.

This consultation will inform the development and agenda of a national Catholic women’s event on September 11, 2021.

This article was published in The Good Oil, March 2021.