HomeLatest NewsNative fish restocking program a lifeline for the environment

The old farm dams in the Wivenhoe Conservation Area on the Sisters of the Good Samaritan’s Mater Dei property at Camden have had a new burst of native fish life, thanks to a restocking program which aims to reduce the impact of introduced species on the local ecology.

Geoff Green, the Manager of Wivenhoe and Environment Conservation, said while a lot of conservation work on the property had concentrated on restoring the endangered Cumberland Plain Woodland and attracting endangered birds and animals back to the property, not much had been done for the aquatic environment.

“But the restoration of the environment must be a wholistic view,” he said. “You’ve got to look at the whole view, not just the bits in front of your face, to try and keep everything in balance.” 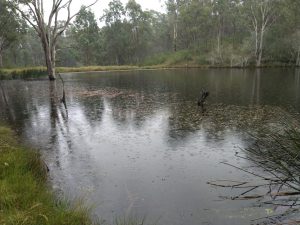 In 2012, the Sisters entered into a contract with the NSW Government’s Office of Environment and Heritage (OEH) to set aside 164 hectares of land for ecological restoration on their 260 hectare property.

The site has two BioBanks totalling about 80 hectares where the OEH, through the Biodiversity Conservation Trust, provides funds for the gradual restoration of the land. Each year, agreed outcomes, including the removal of feral animals and weeds and regeneration of native species, must be achieved so that money can be released for further work.

The site has been owned by the Sisters since 1910 and is the largest privately owned tract of Cumberland Plain Woodland in the Sydney basin – an ecosystem which has come under increased threat since colonial days when it was cleared for grazing. Since then is has suffered from the relentless spread of urban development and the detrimental effects of introduced plant species. 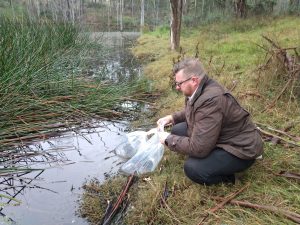 “Up to now we’ve concentrated primarily on flora, by removing introduced species like the African Olive bush and privet,” Geoff said. “Not a lot of emphasis has been placed on the fauna, because we expect that the fauna will re-establish itself when we rebuild the native environment.

“It’s like the line from that movie, Field of Dreams. ‘Build it and they will come’.”

Geoff said the dams and waterways on the property were filled with an introduced species called Gambusia or Mosquito Fish.

“They were introduced in the belief that they would control mosquitos in stagnant waterways but then they took over, depleting other native water life,” he said.

“The best way for us to deal with that is to introduce some Australian Native Bass, which are endemic to the area.”

Geoff contacted the Department of Primary Industries and Fisheries and found a company that stocked genetically correct Australian Native Bass. The company provided 800 fingerlings, measuring 25-30mm long, which are now being introduced to the Wivenhoe waterways.

“They will feed or predate on the Gambusia,” Geoff said. “Some will die, some will survive, and those that survive will breed and do the right thing for the environment around them.

“One of the other benefits to the local area will be that if they breed up, during periods of flood their eggs will end up floating down and adding more population of the Bass to the Nepean River (which flows through the property).

“It’s just a nice way of using the waterways on the property to help keep everything in balance.”

This article was published in the July 2021 edition of The Good Oil.