HomeLatest NewsGood Samaritan mural honours the past and inspires the community

Good Samaritan mural honours the past and inspires the community

The Sisters of the Good Samaritan will continue to be an integral part of the Saints Peter and Paul’s Catholic Primary School in Bulimba, Queensland, thanks to a new mural depicting their charism and legacy.

The mural, by local artist Rachel Saurini, occupies pride of place at the entrance to the school, and pays tribute to the Sisters’ long involvement with the school community, which began at its foundation in 1916.

Assistant Principal of Religious Education, Sarah Esbensen, said the commissioning of the mural was the culmination of the events the school held in 2021 to focus on the Good Samaritan charism of ‘being neighbour’ and the significant contribution of the Good Sams to the school and parish community.

“The idea for the mural in this space came from a chalk mural the children drew on our Sts Peter and Paul’s feast day in 2021,” Sarah said.

“The words of Jesus’ commandment to ‘love one another as ourselves’ have directed the life and work of the Sisters of the Good Samaritan here for more than 100 years. This mural, placed in welcome to all who enter the community, tells how Sts Peter and Paul’s charism and culture is informed by this teaching.” 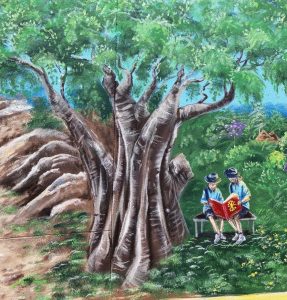 Sarah said the central image in the mural was the big tree depicting one of the main landmarks in the school. The tree was planted by a student from the first class at Sts Peter and Paul’s in 1916 and is featured in the school logo.

Students are depicted under the tree, protected by its shade, learning about the story of the Good Samaritan. To the left of the tree is depicted the rocky landscape the Samaritan travelled between Jerusalem and Jericho. To the right of the tree is depicted the Brisbane landscape that forms the backdrop to Sts Peter and Paul’s School. In the Good Samaritan’s actions these worlds meet as the students ‘learn for life’ the lessons of ‘loving our neighbour’.

Images in the mural also acknowledge the role the Turrbul people have played in the life of the region, through the inclusion of local wildlife important to the Turrbul people – the water dragon and the magpie lark. Bulimba derives its name from the Turrbul word for The Place of the Magpie Lark.

Sisters Mary Randle SGS and Ellen Randle SGS, who are also familial sisters, both attended Sts Peter and Paul’s School as students and are currently back living within the parish in retirement. They were overwhelmed by the school’s beautiful tribute to the role of the Good Samaritan Sisters in its life and history.

“It’s rather lovely,” Mary said. “It’s got the representation of the Good Samaritan founders, as well as the Indigenous heritage of the area and the tree that’s been planted for so long.

“It’s a beautiful way of trying to keep the Good Samaritan spirit and ethic in the school because the very DNA of the Good Sams is in this school and parish.” 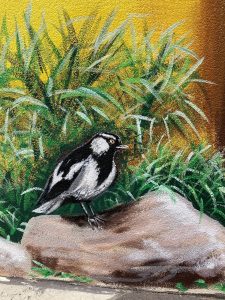 Mary said her family of five girls and two boys all went through the school. Mary, Ellen and their late sister Veronica later joined the Good Sams and one of their brothers, Charlie, joined the Marists. Tom (deceased), Carmel and Ann married.

Mary spent many years away from Brisbane, teaching and engaged in pastoral associate ministry, as well as more than five years in Kiribati.

“I came back in 2002 and still worship at the Parish of Saints Peter and Paul, so we feel very much part of this community and it was lovely to have the mural recognise the role of the Sisters in this way,” she said.

Ellen said the Sisters had made a big impression on her during her schooling at Sts Peter and Paul.

“I think it was their example and the prayers of our parents that helped form my vocation,” she said.

After 27 years in North Queensland and eight years in Whyalla, South Australia, Ellen returned to Brisbane several years ago following her diagnosis with Parkinson’s Disease.

“I think the mural is another lovely way to keep the Good Sam heritage alive in the school and we’re very happy to still be so close to the school and parish community,” she said. 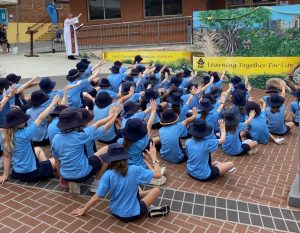 Sister Eugennie Levinson SGS is also still involved in the local parish community where she is a member of the Social Justice Committee, the RCIA, and reads at Mass.

“I’ve only been living here for seven years, so I haven’t had as much to do with the school as the other Sisters,” she said. “But it’s very evident that the school certainly honours and continues to honour the spirituality of the Good Sams, and the mural is another lovely witness and reminder of the contribution of the Sisters over many years.”

Sarah said the school was “thrilled” that Mary and Ellen were able to be at the blessing of the mural on November 10 last year.

“These ladies hold a special place in the heart of all at Sts Peter and Paul’s, and many children still work with them each week in the support-a-reader program that they volunteer in,” she said.

“For our feast day celebrations in 2021, Sr Mary and Sr Ellen also helped us to create a video detailing the history of the Good Samaritans in our school. In this way, their memories and knowledge will be preserved for generations of students to come.”