When Good Samaritan Sisters Rita Hayes and Michelle Reid volunteered for ministry in Timor Leste in 2000, they set out to identify the areas of greatest need in the wake of the devastating fight for independence from Indonesia.

The Sisters could see the people were crying out for schools and education, and not long after, the Good Samaritan Scholarship program was born.

Rita said they arrived in a country that had been totally devastated. “The destruction was beyond belief; there was literally not a building left intact, not an animal of any kind to be seen, barely a commodity available to purchase,” she said.

“Education was not on the horizon, except for some of the religious congregations, such as the Salesians, who were trying to tidy out the debris from what was left of their schools and make them ready for classes.” Rita and Michelle started out working with Br Dan Courtney CFC and the Salesian Sisters. They began offering English classes to the local people in Dili, but soon, Rita joined Br Dan by responding to a plea for help from five isolated mountain villages in the District of Ermera.

“I went to live in one of these villages, Railaco Kraic, in a small house with a superb mountain view but few facilities,” Rita said. “It’s a coffee-growing area where people survive on subsistence farming.

“My main work was teaching English to children and adults; training groups of adults in each village to teach literacy in their native language, Tetun, to village adults; and providing resources to the adults and children in each village.

“All of this came from donations in kind and/or money from Australia.”

Rita, who spent 15 years in Railaco, said it was evident that education had been seriously disrupted during the Indonesian occupation.

“Many children just didn’t go to school and now, in the aftermath, education was difficult to obtain. Senior secondary, for which parents had to pay, was beyond many families and hence the idea grew to commence a scholarship program,” she said.

“Again, friends, associates and people in Australia, who heard about it, wanted to contribute and the scheme has been instrumental in educating many village children.”

Until the arrival of COVID-19, Rita, who returned to Australia in 2015, would visit each year to meet with the students, check on the progress of existing scholars, and present the scholarship payments. 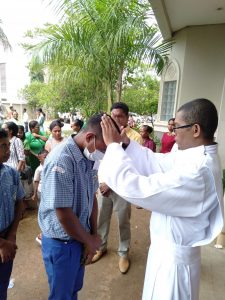 School Principal Fr Hyoe Murayama SJ said that with an enrolment of 360 students, about 17.5 per cent of them were receiving Good Samaritan Scholarships.

“If they did not receive a scholarship, some of them would have to stop attending school,” Fr Hyoe said.

“Therefore, for the individual student, receiving a scholarship means that his or her family has received God’s blessing through the care of teachers and benefactors. It also implies that their daily difficulties and hardships are not ignored but accepted with a sense of empathy and solidarity.”

Rita said the scholarship program was so successful that it resulted in some of the NOSSEF school graduates wishing to continue their studies at university – a seemingly impossible dream.

“We began offering some scholarships to students, allowing them to continue their education in the universities being started in Dili,” she said.

“I always believed that Timor wasn’t going to get anywhere by continuing to be dependent on foreign nations. We had to educate the young people so they could contribute to building and developing their own nation.”

One young woman, Georgina, received a scholarship to the NOSSEF school and then another to study nursing at university.

She is now working at a Jesuit school in Dili helping to run their mobile health clinic servicing remote and inaccessible areas.

“Another young woman to whom I was teaching English had six children and she came to me and said she’d like to do university study. We gave her a scholarship and she graduated in psychology,” Rita said.

“Education has opened up the whole world to these women and helped them contribute to their society in so many different ways. One young woman graduated with a Bachelor of Engineering (honours) and is now helping install a water system for one of the districts.

“It’s a great joy to see that girls and women who face significant barriers in East Timor have blossomed under the scholarship program.” 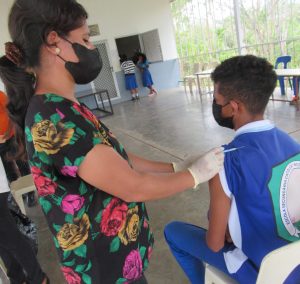 Good Samaritan Foundation Executive Director Catherine Cresswell said the program in Timor Leste was one of several scholarships administered by the Foundation for students in need.

“The Foundation became involved after Sister Rita approached us to help come up with a plan to make the program sustainable over the longer term. I travelled to Timor with Rita and we met with our local Jesuit partners in Railaco,” she said.

“From there we were able to put together a partnership with the Alola Foundation, which was established by the former East Timorese First Lady, Dr Kirsty Sword Gusmao, to support women in a range of ways, including women’s and maternal health, as well as education.

“Overall, the program has had more than 100 tertiary graduates who have gone into teaching, nursing and other professions supporting the development of East Timor.

“Apart from the tuition fees, we are also now able to provide a stipend to assist the students with living expenses.”

The Good Samaritan Foundation will soon launch a Shopify site, where people can buy e-gift cards, instead of the usual retail gift cards, to give the gift of education.

“This program is making an enormous level of difference in the lives of these young people and their young nation,” Catherine said.

Fr Hyoe said the students at his school were deeply grateful for the donors who supported the scholarship program.

“Without their support, we cannot provide effective service and mission in this field of education,” he said.

“By donating money, you are planting seeds of hope for the future of this country; you are proclaiming the gospel of generosity and solidarity for the faith of our young Catholic generations.”