The scholarships provide educational opportunities for the young people in Bacolod. Image: Sisters of the Good Samaritan.

Four young people from the poorest areas of Bacolod in the Philippines, who began their education with the Good Samaritan Kinder School in 2004-05, will soon graduate at tertiary level, thanks to scholarships supported by the Good Samaritan Foundation.

The graduations are the culmination of a vision to provide life-changing educational opportunities for the young people in Bacolod, from childhood through to adulthood.

The first principal of the Good Samaritan Kinder School, Sister Leonie Duenas SGS, said it was time of great thanksgiving.

“The words of St Benedict come to me,” she said. “I feel so very happy that God has brought to fruition the good works that began at the Kinder School 18 years ago.

“A big thank you for the support of our Good Samaritan Sisters and our benefactors and Partners in Ministry.”

Sister Anne Dixon SGS, who is based in Bacolod, said the scholarships, funded by donors and administered by the Good Samaritan Foundation, cover the students’ tuition fees, books, uniforms and transportation.

“During COVID-19, and indeed for most of the students still now, the transportation allowance became a distribution of food for the family – rice and fish, or rice and pork, rice and chicken and vegetables,” she said.

“This is because most of the colleges have not returned to face-to-face teaching, so the students had no transportation costs. However, the families were struggling with the extra burdens from COVID-19 restrictions, so the food packs were appreciated.”

Anne said that with the students studying online, the Sisters were also able to support students with their computer challenges.

“Weak internet links at home, or no internet at home, meant they needed computers and a place to study,” she said. “The Outreach Centre has been able to supply laptops and some space, thanks to generous donors.”

The Sisters extended special thanks to the Schuh family, who, through the Foundation, were the instigators of the Scholarship Fund.

“They have been loyal and generous supporters for all these years,” Anne said. 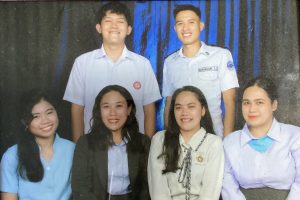 One of the graduating students, 22-year-old Desirie Jungco Tiberio, began her education with the Good Samaritan Kinder School in the class of 2005-06, graduating as an Outstanding Student.

After progressing through primary and high school, the Good Samaritan Kinder School Tertiary Scholarship enabled her to attend Riverside College, graduating with a Bachelor of Science – Psychology and picking up a number of academic awards along the way.

The eldest of four, Desirie lives in a household identified by the Philippines National Government as one of the ‘poorest of the poor’.

“Despite the monetary aid coming from the authorities, our household is still having a crisis in terms of finances,” she said.

With her father no longer living in the household, and her mother not able to work because of ill health, Desirie has been working as a part-time tutor for local school students and editing research papers to help her family to survive.

Desirie’s school years were a constant challenge, made more difficult when she was burned in a fire and needed medical treatment. Her family’s perilous financial situation was an ever-present threat to her education.

“The four years in high school were very hard,” she said. “I experienced walking to school, being in debt to my friends because of extra expenses for schoolwork, and going to school with an empty stomach because of financial problems at home.

“In addition, our electricity had been cut, making the situation worse, especially for my studies. I needed to stay in the neighbourhood at night, just to finish writing reports or be out in an internet café for research.

“Poverty became a big challenge for me to continue my studies, however, with God’s grace I managed to overcome all the hardships and finished senior high school with honours.

“Then I was fortunate to be accepted in the new Tertiary Scholarship offered to Good Samaritan Kinder School alumna who wished to pursue College.”

Desirie says the scholarship was a great help to her, not only financially, but also for her holistic welfare.

“The people in the Outreach Centre offered me constant support and gave me a place where I could properly study, especially during the pandemic,” she said.

“Since we were forced to transition to online classes, the internet was one of my problems, but the Centre was able to provide it and thanks to them, I was able to survive remote classes. Also, the various activities that they engaged us in helped me with my growth as a person, a student and a professional.

“They taught me the significance of working with the community and reaching out to others. The values that the people behind the scholarship instilled in us will become part of my foundation as an individual and throughout my life I will be grateful for everything.

After graduating next month, Desirie plans to take the required state examinations for teachers and psychologists.

“I hope that somehow in the future, I can give back to the people who assisted me by helping others by any means that I can,” she said.

“My success is not just mine but is the teamwork between me, the scholarship, my family, the people who supported me, and God.”

This article was published in the June 2022 edition of ‘The Good Oil’.