The program provides scholarships for 63 students each year at the NOSEFF School of Railaco. Image: Good Samaritan Foundation.

Seventeen more young people who are part of the Good Samaritan Railaco Scholarship Program have graduated from tertiary studies in Timor Leste over the past two years, despite practical challenges brought on by the COVID-19 pandemic. 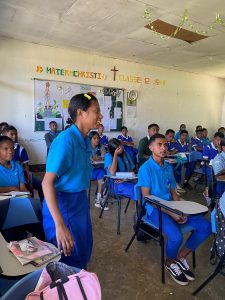 Until the arrival of COVID-19, Rita, who returned to Australia in 2015, would visit each year to meet with the students, check on the progress of existing scholars and present the scholarship payments.

“It’s been a couple of years since we were able to go up there, because of COVID-19, so I was really thrilled to get back there and meet the graduates,” she said.

“I was also thrilled with the progress the NOSEFF School has made since we were there last. It’s just wonderful. The children are learning so much. You can really see that it’s nation-building happening in front of your eyes.”

Rita and Catherine began their visit to Timor Leste in Dili, meeting members of the Alola Foundation, which was established by former East Timorese first lady, Dr Kirsty Sword Gusmao, to support women in a range of ways, including education. The Good Samaritan Foundation is in partnership with the Alola Foundation to administer the tertiary scholarships.

“It was a joy to meet them,” Rita said. “They were mainly students in their first year of studies and were living in Dili. While this makes it easier for them to attend university, they have to cope with living away from their homes in the mountain villages. 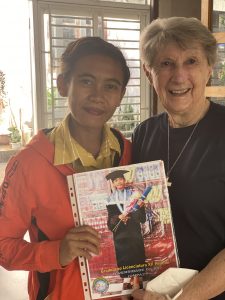 “As with our students in Australia, the Timorese had great difficulties trying to access classes during the pandemic. Some classes were online but the available internet is very spasmodic.

“In addition, the students don’t have computers, nor do they have access to them. They accessed their online classes via their phones. And we’re not talking about the latest iPhones or Samsungs. Those who have phones have the basic, cheap editions from Indonesia. They described the process as ‘difficult’, which we thought was a major understatement! This is the reality of life for village students trying to fulfil their educational ambitions in Timor.”

From Dili, Rita and Catherine travelled to the isolated mountain village of Railaco where Rita had lived for 15 years.

They stayed with the local Jesuit community and visited the NOSSEF Catholic Secondary School.

“We were greeted at the school gates by students dressed in traditional tais. Dancing and singing, they led us to the outdoor covered area to be officially welcomed,” Rita said.

“We were very pleased to hear from a representative group of students who conveyed to us, in English, their gratitude and explained why this assistance was so important not only to them, but to the family,” Rita said.

Over the following days, Rita and Catherine had the opportunity to meet more of the Tertiary Scholarship students and some ex-students who are now making their way in the working world.

“It was wonderful to marvel at the number of students who had graduated since our last visit in November 2019,” Rita said.

“During this COVID-19 time, these students had variously tried to attend classes, struggled to receive lessons online, sat for exams and wrote a thesis. They also contended with a pandemic and a severe flood. To escape the flood, some had to return to their home villages, making study extremely difficult.

“The Timorese continue to amaze me, and I am in awe of their ambition and their resilience. They truly deserve any assistance we can give them.”

Catherine said that meeting the students and ex-students, and hearing directly from them was a highlight of the visit.

“The way they’ve been able to adapt to the very challenging situation of the pandemic and how it affected their studies is really amazing,” she said.

“It was encouraging to hear of ex-students who have now graduated and gone on to work in really important occupations for the development of Timor Leste, like public health, government, architecture, nursing and construction, and the effect these scholarships will have on the local community.”

Catherine said it was clear from their visit that the local community in Railaco still held a great deal of affection for Rita.

“Rita has known some of these young people who are graduating now for a really long time, since they were kids, and her presence there for 15 years is still deeply held,” she said.

“One of the Benedictine values is Stability and this is what Stability of presence and relationship yields.

“The people there know that our visit is not about just popping in and saying ‘here’s your grant’, but rather, it’s that ongoing relationship, in all of the projects we’re involved with, that matters. And here, in these graduating students, we see the fruits of that stability.”