Good Samaritan Sister Elizabeth Delaney, whose ministries have included education, canon law, ecumenical relations, national Church life and support of religious and clergy, has been presented with the pontifical honour Croce Pro Ecclesia et Pontifice for “her considerable service to the Church in the Archdiocese of Sydney and Australia”.

Elizabeth said she was “surprised and a little embarrassed” to have received the award, but also grateful to “the God of surprises” for all the opportunities she had received, to the Sisters of the Good Samaritan for their support and example, and the people she had worked with over the years.

“I think any contribution I’ve made has simply been a result of me saying ‘Yes’ to the opportunities God has given me and being prepared to roll up my sleeves and do the job,” she said. 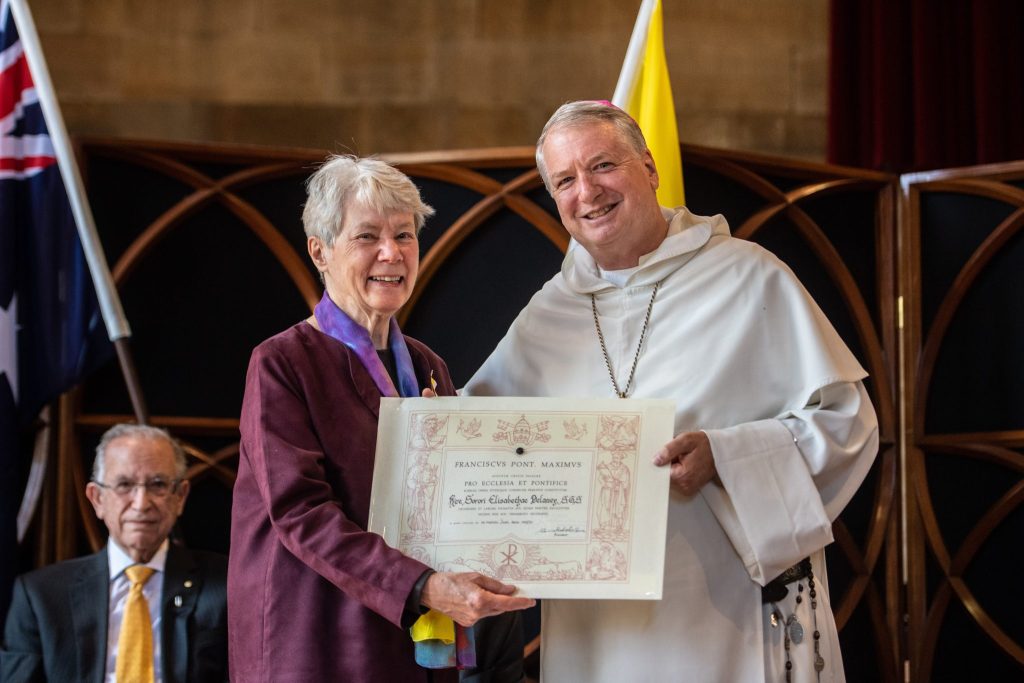 Papal honours are awarded by the Holy Father, usually upon the recommendation of the bishop of the diocese in which the recipients reside.

In his address at the conferral of the awards on the Feast of the Dedication of the Basilicas of Saints Peter and Paul, Archbishop Fisher said the feast day celebrated the memorial of the dedication of the two papal basilicas in Rome. Both are beautiful buildings, constructed by many people over many years for God’s glory and to maintain the Church’s connection to Saints Peter and Paul – the apostolic tradition and the Vicar of Christ.

“Today, we’ve heard tell of selfless acts of service that 10 of our relatives, friends and colleagues – all of them spiritual architects or designers, craftsmen or builders’ labourers – have carried out in building up God’s kingdom,” he said.

“Each believes they were only doing what good servants of God and humanity would do and that there are many others as much or more deserving. Yet, in honouring them the Holy Father and the Church of Sydney signals its praise for the work done and invites others to do likewise: it is, you might, say, as much for the sake of others and what they might yet do, as it is for these 10 and what they have already done.”

Speaking at the presentation ceremony, Chancellor of the Archdiocese of Sydney, Chris Meney, said the Croce pro Ecclesia et Pontifice was awarded to both lay people and clergy for distinguished service to the Church.

“Sister Elizabeth Delany has spent her life promoting the faith in the context of Catholic education specifically, as well as in ecumenical relations more broadly,” Mr Meney said.

“Foremost among her gifts … is a fidelity to the search for God and the service of God’s people. She is noted as a deep thinker, with a capacity for analysis and exploration that has made her an invaluable asset to the Tribunal here within the Archdiocese of Sydney. Her intelligent, purposeful, and compassionate approach to those whom she encounters, as well as her keen sense of justice, have endeared Elizabeth to many.

“The Papal Honour of Croce Pro Ecclesia et Pontifice is presented to Sister Elizabeth in recognition of her Christian witness and her outstanding promotion of the Catholic faith across her many roles over more than 50 years of religious life.” 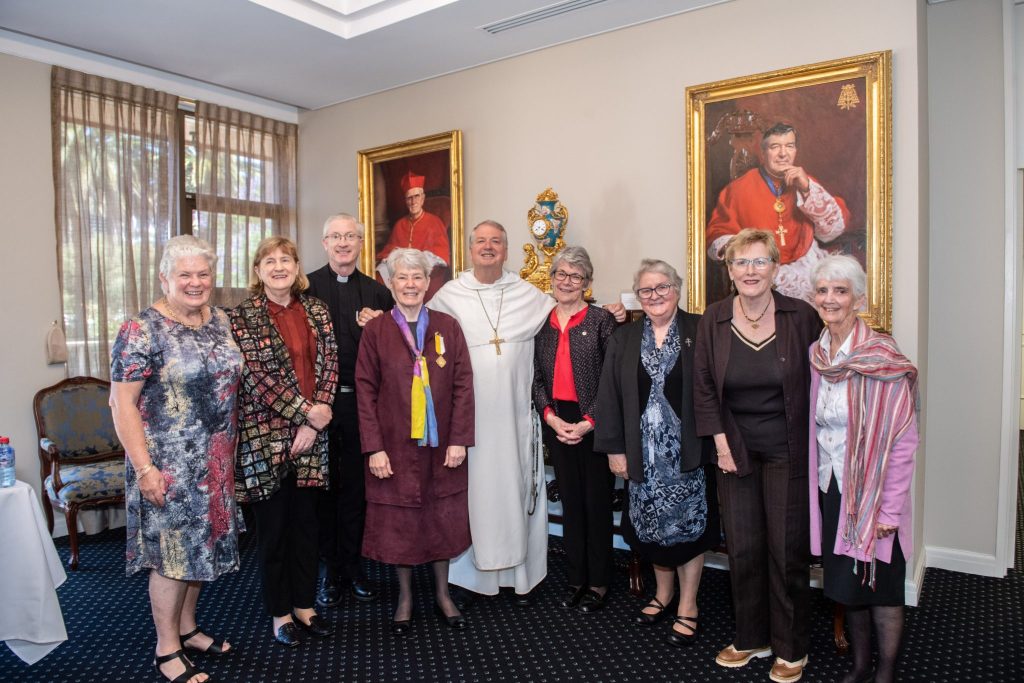 In a letter of endorsement for the papal honour, Congregational Leader of the Sisters of the Good Samaritan, Sister Patty Fawkner, said Elizabeth had been a loyal member of the Congregation for 53 years and had undertaken a broad range of ministries.

“In each of her ministry placements she has enabled and encouraged those around her. Elizabeth communicates well with people from different backgrounds and across all age groups,” Patty said.

Elizabeth said she felt her ministry had been a two-way street with those with whom she had worked.

“I do want to encourage and enable people, but I’m encouraged and enabled by other people’s example at the same time,” she said.

“I have been regularly inspired by the quiet example of people in the ordinariness of life.

“And I’ve always preferred to work together with people, rather than on my own. It has been working together with others, through issues and challenges, and seeing their example which has energised me.”

Elizabeth began her ministry as a teacher and principal of Catholic schools throughout Australia, later completing a Graduate Certificate in Special Education and taking up a position with the National Catholic Education Commission, with responsibility for special education and vocational education.

In 1995, the Congregational Leadership suggested Elizabeth study canon law – a possibility she had not previously considered.

When she returned home from St Paul’s University in Ottawa, Canada, with her canon law degree in 1997, Elizabeth was invited by the then Bishop of Wollongong, Philip Wilson, to take up the position of Chancellor of the Diocese, becoming only the second woman in Australia to hold such a post.

From 2000 to 2004, Elizabeth returned to Ottawa to obtain her Doctorate in Canon Law, after which she worked within the secretariat of the Australian Catholic Bishops Conference as Executive Secretary for Church Life – a broad-ranging role which covered relations with Aboriginal and Torres Strait Islanders, ecumenism and inter-religious relations, canon law, and doctrine and morals.

Elizabeth pursued her deep commitment for ecumenism as a member of the National Council of Churches for 10 years, including a three-year term as General Secretary.

In 2018, Elizabeth was appointed Vicar for Consecrated Life in the Archdiocese of Sydney.

She is also a member of the Regional Tribunal of Sydney and Defender of the Bond, a position which sees her applying canon law mainly in marriage annulments, a Board member of the Broken Bay Institute, a Member of the Companies of St Patrick’s College, Campbelltown and St Mary’s College, Wollongong, and is a member of the Governing Council of Good Samaritan Education.

“Having started off in education, my ministries have ended up encompassing a very broad section of Church life,” she said.

“And that has given me a wider picture of the Church and the multiple issues that are at play across the Church and I have really appreciated that broader view and all the people I’ve met and worked with along the way.

“I wouldn’t have foreseen any of this when I first entered the Congregation. It’s been wonderful, really. There have been lots of surprising turns along the way.” 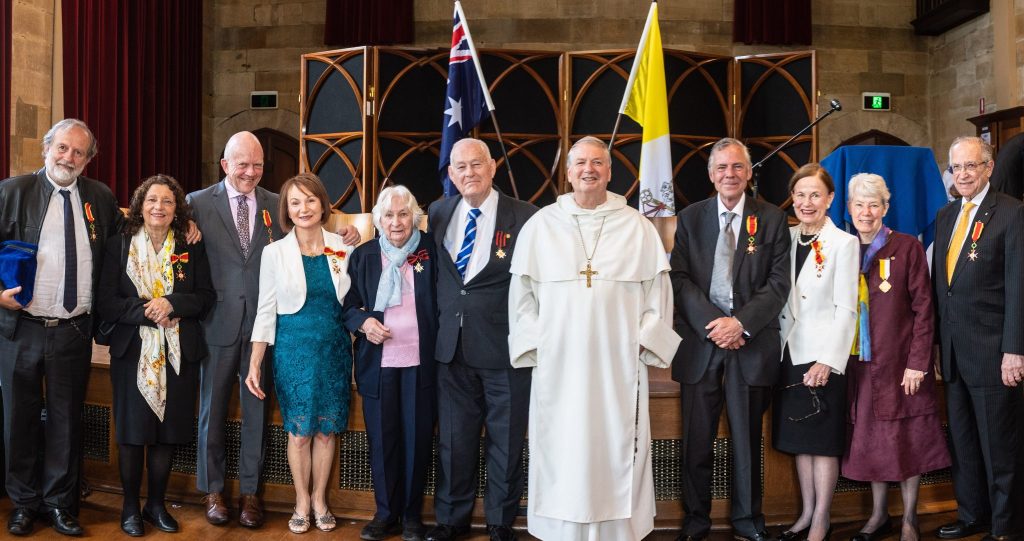 This article was published in the December 2022 edition of The Good Oil.