The Good Samaritan community was saddened to learn of the death of Aunty Joan Hendriks in January this year. Aunty Joan had a long association with Lourdes Hill College at Hawthorne in Queensland, where she was Elder in Residence and one of its most treasured alumnae.

Principal Robyn Anderson paid tribute to Aunty Joan. “Her deep connection with the college began as a student in 1947, as a past pupil, as a parent of three daughters in the 1970s and then as our Elder in Residence for the past 10 years,” Robyn said. 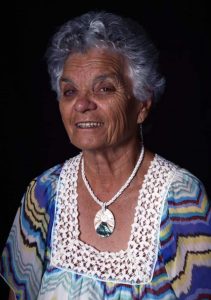 Image used with the permission of Aunty Joan’s family.

“She made an extraordinary contribution in roles in the local, national and international educational, social justice, spirituality and Church fields. Aunty Joan was renowned for her tirelessness in promoting and supporting the education and wellbeing of young people.

“Her great passion in her time as Elder in Residence can be summed up by her words to staff in 2013: ‘True understanding, compassion and kindness come when we know another’s story. When we make time to listen to another we can begin to do as Jesus asks us as he concludes the Parable of the Good Samaritan, to go and do likewise.’”

Aunty Joan was the inaugural recipient of the Lourdes Hill College International Women’s Day Woman of the Year Award. She was remembered at this year’s International Women’s Day Breakfast on 6 March, with proceeds from the event supporting the Lourdes Hill Foundation. The foundation provides bursaries and scholarships, including the Aunty Joan Hendriks’ scholarship. Past pupil of Lourdes Hill College Kerrie Hess was the guest speaker at this year’s breakfast. Kerrie is a renowned international fashion illustrator and artist.

A Ngugi woman of one of the three clan groups of the Quandamooka People of Moreton Bay, Aunty Joan was born in 1936 and raised in Bulimba as the eldest of four children. She attended Sts Peter and Paul’s Catholic Primary School in Bulimba before commencing at Lourdes Hill College in 1947.

Aunty Joan brought Indigenous Australian issues to the world stage at the United Nations and at International Interfaith Forums. She had a deep commitment to the dialogue between Aboriginal creation spirituality and Christian faith.

In May 2012, Aunty Joan was awarded ACU’s highest honour, Doctor of the University, for her contribution in the field of Aboriginal education, reconciliation and justice for Indigenous Australian peoples.

In 2013, she was a State Finalist in the Senior Australian of the Year Awards for her extensive work in promoting the importance of reconciliation for all Australians.

Aunty Joan passed away peacefully on January 26, 2020 and was laid to rest in Dunwich Cemetery on Stradbroke Island.