HomeLatest NewsDiscussion provides an insight into the treatment of refugees

Discussion provides an insight into the treatment of refugees

Students from Rosebank College and St Scholastica’s College participated in a discussion on the issue of refugees and asylum seekers, which was hosted by the Sisters of the Good Samaritan on June 15, 2021. More than 50 people attended, including Sisters, Oblates, staff members, and students and teachers.

The discussion was part of the Third Tuesday Conversations program, a series of events organised by the Good Samaritan Spirituality and Mission team, and held at the Congregational Centre in Glebe.

The discussion opened with a presentation by Sr Catherine Norman SGS from the Good Samaritan Refugee and Asylum Seeker Support Network on the treatment and policies in relation to refugees within Australia, and the many hurdles that stand in the way of their legal recognition as refugees. 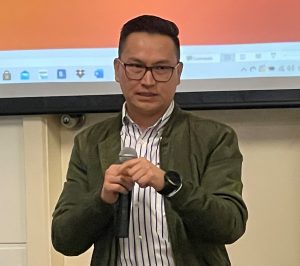 The guest speaker was Zaki Haidari from Jesuit Refugee Service Australia who described his own experience as a refugee, and the persecution which he and his family faced at the hands of the Taliban in Afghanistan as a result of their status as members of a minority ethnic group, Hazara.

In a moving recount of events, we heard of the many ways the safety of Hazaras can be endangered in Taliban-controlled areas for engaging in activities and behaviour that we take for granted in Australia.

Simply attending a university in the capital Kabul could lead to dire consequences which we became aware of when Zaki described how his brother was executed on the roadside when the Taliban found out that he was attending university; and their father was ‘taken’ by the Taliban, never to be seen again.

Leaving Afghanistan at age 17, Zaki embarked on a dangerous sea journey to Australia where even making it off the boat alive was in doubt when the engine stalled in the middle of the ocean. 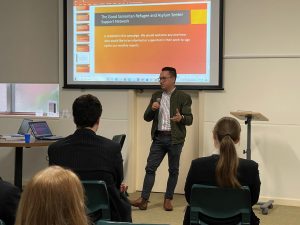 He also described his time in immigration detention, as well as the current instability that he faces as a result of being forced to have his refugee status reviewed every few years. Current government policy means he cannot have permanent resident status in Australia.

It is easy for us to fall into the trap of ignorance when living our daily lives, which is why an opportunity like this, while confronting, is one that all the students who attended were extremely grateful for.

We each want to extend our gratitude to the Sisters of the Good Samaritan for hosting this discussion, with a special thanks to Zaki for sharing his incredible story.

Please note: COVID-19 restrictions permitting, it is hoped the next Third Tuesday Conversation: A Poetry Morning presented by Colleen Keating will take place on August 17, 2021 from 10am-11.30am. For further information, click here.

This article was published in the July 2021 edition of The Good Oil.