Recent renovations to St Scholastica’s Chapel in Glebe have allowed the Sisters of the Good Samaritan’s Archivist to get a bird’s-eye view of some of the treasures of the chapel; the beautiful stained glass windows, including the rarely seen Rose Window.

The renovations, necessitated by water damage to the chapel roof, included the full replacement of the roof using Spanish-style terracotta tiles and copper guttering and downpipes, all done in a manner which maintains the heritage integrity of the building. 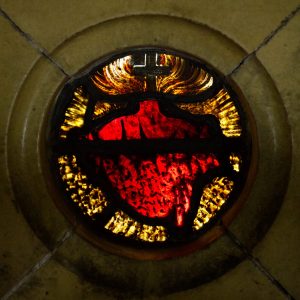 Image: ruby centre of the Rose Window. Sisters of the Good Samaritan.

St Scholastica’s Chapel, which is actually named the Archbishop Polding Memorial Chapel, after the founder of the Sisters of the Good Samaritan, was opened on November 29, 1931, replacing the chapel in the old ballroom of the adjacent building, Toxteth House.

The ballroom had been used as a chapel since the Sisters moved to Glebe, NSW, from their Pitt Street convent in 1901 when their buildings were demolished to make way for Central Railway Station.

Joanna Mead, Archivist for the Sisters of the Good Samaritan, said the new chapel was built by Mr RM Bowcock, under the supervision of the architects Roarty & Roarty and Mr Douglas S Gorman.

It is built in a simple version of Italian Romanesque architecture and is lit by 18 beautiful stained glass windows by John Radecki, a Polish migrant to Australia and the first Australian-trained stained glass artist.

Greg O’Brien, Finance and Business Manager for the Sisters of the Good Samaritan, said the Congregation was committed to preserving and enhancing the heritage aspects of the building during the renovations.

“The work was done with the assistance of a heritage architect to ensure that we complied with all aspects required under the local Heritage listing of the Chapel,” he said. 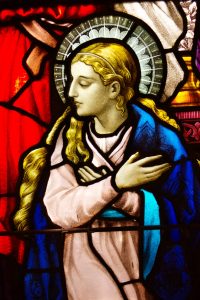 “Once the roof was replaced, we could then start the repair and repainting of the chapel.

“A specialist architect, who consults on religious buildings, provided his recommendations for the colours to be used on the various parts of the chapel. For example, the ceiling is slightly different to the walls and different again to the columns.

“This was a major work which required scaffolding to be erected in order to reach the ceiling and the highest points of the walls.”

It was this scaffolding which allowed archivist Joanna to get a bird’s-eye view of some of the greatest treasures in the chapel, the stained glass windows.

“I was able to get close to many of the windows and take photos,” Jo said, “Placement of the scaffolding didn’t always allow for easy shots and in some cases obscured the windows or parts of them. 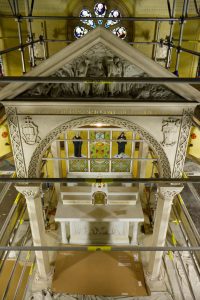 Image: Baldacchino and Rose Window. Sisters of the Good Samaritan.

“It was quite a thrill being able to see the Rose Window up close as it’s been obscured since the installation of the baldacchino.”

The baldacchino is the canopy which covers the entire altar in the chapel. The archives record that it was made in Italy and was originally intended for a church in Mexico, but a revolution broke out there and the baldacchino could not be delivered and came to St Scholastica’s Chapel instead.

Sitting behind the baldacchino is the Rose Window, which is described in the book, The Treasures of St Scholastica’s* as being of “exceptional beauty”. 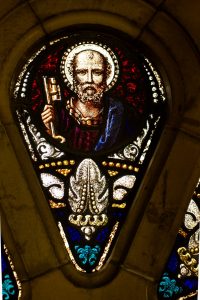 The Australian Catholic Truth Society Record of February 25, 1935, speaks of it in glowing terms:

“Of the nine attractive stained glass windows in the chapel, the rose wheel window at the back of the sanctuary is the most arresting. Fashioned principally in tones of brown, with a very pretty ruby centre, it represents the four evangelists (Matthew, Mark, Luke, and John), St Peter, St Patrick, St Francis de Sales and St Francis Xavier. Made in Sydney, it is a fine tribute to Australian workmanship”.

Joanna said that apart from the Rose Window, there are two stained glass windows on the sanctuary and the archives record the personal stories behind their donation.

The window on the left, showing Mary Magdalen meeting Jesus in the garden after the Resurrection, is in memory of the first five Sisters of the Good Samaritan who in 1857 entered the Pitt Street convent, which at that time was being used as a refuge for homeless women and children.

The window on the right, representing Our Lady Help of Christians, is in memory of Mary Isabel Cameron, a student at St Scholastica’s College who died in April 1931, within a couple of years of graduating.

Near the stairs that lead up to the sanctuary are two windows. On the left, the Good Samaritan, and on the right, St Brigid. The window depicting the Good Samaritan commemorates Mother Scholastica Gibbons, a Sister of Charity who helped Archbishop Polding to found the Good Samaritans and remained with them for many years until they elected their first Mother General in 1876.

In the transept, the window on the left, showing St Anne teaching her daughter, the Blessed Virgin Mary, to read, was presented by the pupils of the Good Samaritan Schools who contributed their pennies, even in a time of Great Depression.

The Ex-students of St Scholastica’s raised funds for the window on the right depicting St Joseph.

Two other windows are memorials to deceased students of St Scholastica’s: Our Lady Help of Christians in memory of Mary Isabel Cameron and Jesus Blesses the Children in memory of Diana and Pamela Foley, weekly boarders at Glebe. The Foley sisters accidentally ate poisoned jam while visiting their grandparents. Mr Radecki used actual photographs in depicting the two children.

The other windows situated along both sides of the nave were dedicated to Mother Marcella Kenny for her golden jubilee as well as the memory of relations and benefactors of the Sisters.

Joanna said while the windows were not part of the current renovation project, restoration work could be undertaken in the future.

“Although the windows are still in good condition, they need some conservation work to bring them back to their original brilliance,” she said. “A project to do this is not yet in place, but we hope to start investigating options soon.”

This article was compiled with the assistance of the Sisters of the Good Samaritan Archives. The photos of the windows in St Scholastica’s Chapel were taken by Archivist Joanna Mead. 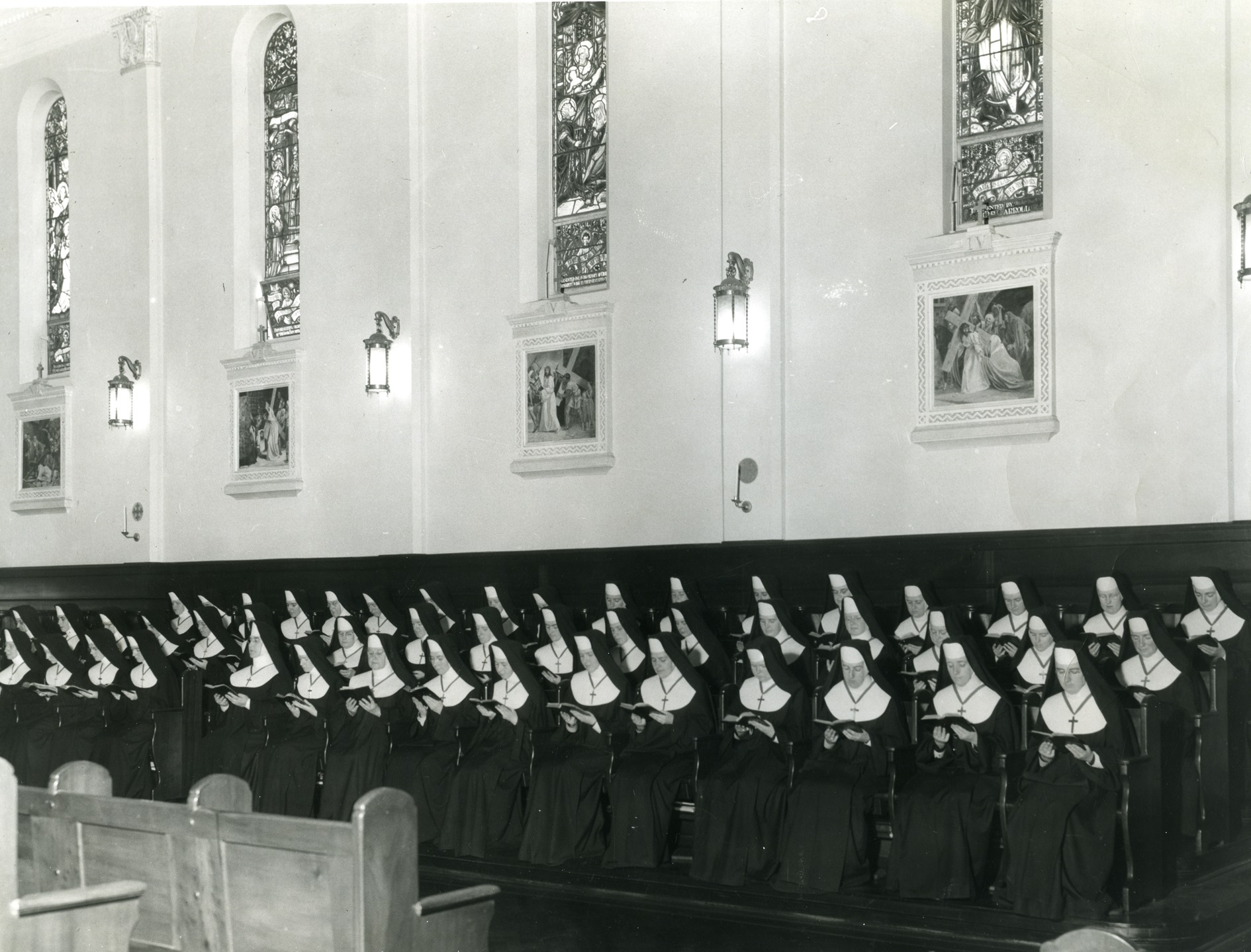