The long-standing warm relationship between the Sisters of the Good Samaritan, Port Pirie Diocese and the Pacific nation of Kiribati was reaffirmed when two I-Kiribati Sisters visited the Diocese recently.

In April this year, Sister Taabeia Ibouri SGS and Sister Katarina Kabiriera SGS delivered a presentation to the Diocesan Assembly on the climate change challenges confronting their island home.

The Sisters, who were born and raised in Kiribati but have been based in Australia until their return to Kiribati this week, spoke to the Diocesan Assembly on the topic ‘Who is my Neighbour?’

They shared their personal experience of living on an island atoll where climate change and rising sea waters is threatening the very existence of the people.

Their visit to the Port Pirie Diocese was a special moment in a decades-long friendship between the Diocese and their homeland. 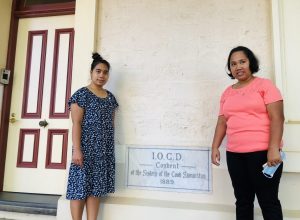 The Sisters of the Good Samaritan have had a continuous presence in the Diocese since 1890, with Sister Marie O’Shea SGS continuing to serve there in the footsteps of more than 150 Sisters over the years. Marie has previously worked for some time in Kiribati.

Congregational Leader Sister Patty Fawkner SGS, said that as part of this relationship, the Diocese, particularly through the Catholic Education Office (CEO), took an interest in the Sisters’ work in Kiribati.

“Under the leadership of former Director of Catholic Education in Port Pirie, Brenda Keenan, there was an agreement formed with the Congregation, the CEO and the Diocese to provide an opportunity for young school teachers and leaders to engage in a two-way outreach experience in Kiribati,” Patty said.

“Under this agreement, a number of teachers have visited Kiribati over the years as Good Samaritan volunteers.

“With their professional expertise, they helped the Sisters in their ministry, along with schools in Kiribati, and our own Good Samaritan Early Childhood Centre.”

Patty said that when she became Congregational Leader, a conversation with the current Director of Education in Port Pirie, Nichii Mardon, concluded that the warm relationship should continue to evolve.

“We agreed to keep the conversation open about what shape that might take as we look to the future, but the mutual goodwill is certainly there,” Patty said.

Others from parishes in the Diocese have also volunteered in Kiribati at various times.

Fr Brian Mathews, Parish Priest at Jamestown Parish, said he first became aware of the Sisters’ ministry in Kiribati some years ago when he got in touch with Sister Bernadette Corboy SGS, who had a big impact on him when she taught him at school.

“After I was ordained a priest, I contacted her to tell her I’d been ordained and that she’d had an influence on my life at school,” he said.

“She wrote back and told me she was working in Kiribati, and I had no idea where that was. She said they’d been hit by drought and were having problems with supply of various things and I asked what we could do to help.”

Fr Brian and the Lutheran pastor in Port Lincoln, where he was based at the time, got together to hold quiz nights and raise funds for the Sisters in Kiribati and for an Indonesian orphanage, which the local Lutheran community had been assisting.

What followed was a series of visits over several years by Fr Brian and volunteers from the Port Pirie Diocese. This included teachers, architects, builders, businesspeople and others, all donating their time and expertise to help the local people in Abaokoro, a small village on North Tarawa.

They repaired the Sisters’ house and sent materials to the local schools and the Good Samaritan Early Learning Centre, built a walkway between buildings, repaired electrical systems, and updated solar panels and lighting.

Fr Brian said the experience had a big impact on those who took part.

“It provided a different outlook for us on the islands, the people, and the life they live,” he said.

“We quickly learnt that often people go to a developing country with an idea that ‘we’ve got all the ideas and we can give them to you’ but what we found was that they were more than capable of sorting out what they needed and our priorities were not their priorities.

“You learn to leave your own biases behind and go with what they truly need.” 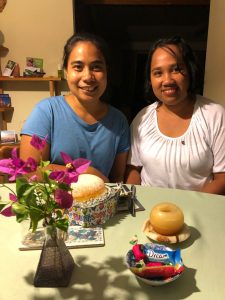 It was on this foundation that Katarina and Taabeia delivered their presentation to the Diocesan Assembly, as part of a series of presentations, exploring the theme ‘Who is my Neighbour?’.

Other speakers included John Lochowiak, Chair of the National Aboriginal and Torres Strait Islander Catholic Commission, looking at the concept of neighbour through the Indigenous lens.

Representatives from Australian Catholic Religious Against Trafficking in Humans (ACRATH) highlighted the issue of modern slavery and being alert to the ‘unseen neighbour’.

The Assembly was facilitated by Gabrielle Sinclair and Carmel Shaw from Good Samaritan Education.

Taabeia’s presentation included an overview of Kiribati’s location, its geography, and community and cultural life.

“As Kiribati is made up of so many islands, the ocean has a really big impact on how we live,” she told the Assembly. “The ocean is also very important to people in Kiribati because we eat a lot of fish and seafood. In Kiribati, we live a village lifestyle. Because we do not have much land, people are closely connected because each island is small.”

Katarina picked up on Taabeia’s description of their island home, outlining the dangers of climate change to their way of life.

Gabrielle said the presence of Katarina and Taabeia helped put a human face to the idea of ‘being neighbour’ found in the parable of the Good Samaritan.

“All of the presenters, through telling their stories and being that face, provided an awareness of neighbour that we don’t always see,” she said.

“The Good Samaritan story has been in that Diocese for so long that the parable is in the bones of the people. But having these different lenses to look at the parable provided a completely different take on it and an opportunity to go even deeper.”

Katarina said she loved her visit to Port Pirie, which has a very different landscape to Kiribati but in some ways reminded her of home.

“I loved following the story of the Sisters and where they have been in this Diocese,” she said. “The landscape of Port Pirie is beautiful. The dry sand, the dust and the sunny days reminded me of Kiribati. I loved the country life and having a chance to stay with other Sisters in South Australia.”

Taabeia also greatly enjoyed her time in the Diocese, visiting not only Port Pirie but also some schools in Whyalla and Jamestown and taking part in a range of Marie’s pastoral ministries.

“One highlight for me was when we had lunch with some Kiribati people who are working at the tomato plantation at Port Augusta,” she said. “I was struck by the sacrifice they make for their families, leaving their young kids behind. I enjoyed the laughing and listening to their stories about their work, families, their experiences and especially the friendship they had together. It was very uplifting.”