Seventy years ago this month, six Good Samaritan Sisters set sail for Nagasaki, Japan, to respond to the need of the people there in the wake of the atomic bomb dropped on the city in 1945. For Sister Mary Constable, 99, of Sydney, it was one of the defining experiences of her life.

When a young Sister Mary Constable set sail from Sydney for Nagasaki, Japan, on the SS Changte with five other Good Samaritan Sisters 70 years ago this month, she thought she would never see Australia or her family again, but she was excited about the adventure ahead.

Mary, now aged 99 and living in Balmain with Sister Marie McMahon, was one of the original six Good Samaritan Sisters sent to Nagasaki to respond to the need of the people there in the wake of the atomic bomb dropped on the city in 1945.

They had been invited by the Bishop of Nagasaki to help in the reconstruction of his diocese after the devastation of the nuclear bomb. It was the first overseas mission established by the Australian congregation. Today the Good Samaritan Sisters are also in the Philippines and Kiribati.

Mary, who was aged in her late 20s at the time, recalls that she volunteered to be part of that pioneering group of sisters in Japan, but was surprised when she was selected.

“Yes, I volunteered,” she says. “I was in the convent and I thought, well, I entered the convent to be of use to the public, along with my vocation, of course.

“But I was surprised to be chosen out of the 600 or so sisters we had at the time.

“It was a big adventure, especially going to a place where we weren’t able to speak the language, but I wasn’t nervous. I hoped for the very best.

“Saying goodbye to my family was hard. We all thought we wouldn’t be returning and they couldn’t really understand why I wanted to go, especially so soon after the war with Japan. It was harder for them than for me, because I had the adventure ahead of me.” The Changte set sail from Sydney for Nagasaki on October 15, 1948. On board with Mary were Sisters Catherine Teresa Mercovich, Julian McKenna, Canisius Whitton, Etheldreda Boyle and Eustelle Gleeson. The voyage took 33 days.

While the days at sea were long and hot, especially as they made their way through the tropics, Mary recalls that the sisters filled in their time easily enough.

“Well, we had our prayer life of course, so that set the structure for our days. And we talked to the other people on board, who were all very nice,” she says.

Learning the Japanese language was also a priority and the sisters spent time every day being tutored in Japanese by a fellow passenger, Mr Bavier, who taught at Yokohama and Melbourne Universities.

“It’s a very difficult language to learn,” says Mary. “And I wouldn’t say that I ever became a truly proficient Japanese speaker. But over the years, I learnt enough to perform my work.”

The Changte stopped in Hong Kong on the way to Nagasaki and the sisters disembarked and took a break for a week or so, staying with the Maryknoll Sisters from America.

“People were very, very welcoming to us there and it was good to talk to some of the sisters there who were out on the mission because they gave us an inkling as to what lay ahead for us,” Mary says.

Back on the ship, it wasn’t long before they hit trouble in the form of a wild typhoon. A number of the sisters succumbed to severe sea-sickness, but Mary says she wasn’t badly affected.

“Oh, it was a big storm,” she says. “And I did think at one stage there that we might all be going off to another land! But there were a couple of us who weren’t sea-sick, which was marvellous.”

Eventually, the Changte limped into Japan’s Inland Sea, a bit the worse for wear, and the sisters set foot on Japanese land at Kure, a naval base, where they were met by the Australian Army Chaplain Father Hogan and two other priests. Before departing for Nagasaki they visited Hiroshima and were confronted with the shelled landscape and the decimated lives of the people.

Finally, on November 18, 1948, they arrived at Urakami on the outskirts of Nagasaki, after a long train journey, where they received a warm welcome from Bishop Yamaguchi, Australian priests already in the district, laity from various parishes and students from the Junshin Sisters High School.

“We received a big welcome on Nagasaki Station, a very big welcome from the people,” Mary says. “The people were really very glad to see us and grateful that we had come to help them.”

The first thing the sisters did after settling in was to open up a small dispensary, thanks to the nursing expertise of Sister Canisius Whitton, to help the people with their post-atomic bomb injuries, radiation illnesses and other ailments.

Mary, a teacher by training, became Canisius’ assistant in the dispensary.

“That dispensary was a wonderful way into getting to know the people,” she says. “We had a lot of medicines with us, provided by the St Vincent de Paul back home in Australia. Having that medicine really self-introduced us to the people and from then on, we were accepted fully. Having a trained nurse with us was just such an asset.”

While the sisters arrived fully equipped with tinned food and other belongings so as not to be a drain on the limited post-war resources in Nagasaki, Mary says the Japanese food and other customs took some getting used to.

“Yes, all of those things were different, the food and the customs,” she says. “But the language was the hardest. We kept our lessons up, but it was very hard and we needed that to be able to communicate and to be of any use.”

Within five years, the sisters left Nagasaki to establish communities in Sasebo and Nara, where they ministered in kindergartens, parishes, and built Seiwa High School, Sasebo. Today, a small community of Japanese Good Samaritan Sisters lives in Nara and one sister is currently supporting the people of Fukushima following the devastating earthquake, tsunami, and nuclear accident there in 2011.

Mary headed up the kindergarten in Sasebo and remained in Japan for a total of 15 years before returning to Australia to take up other ministry in social welfare.

She says one of the many highlights of her years in Sasebo was the wonderful friendship formed between the American military community stationed there and the sisters and the Japanese people.

“We had one kindergarten class for the American children in the mornings, taught by Sister Claire Black,” she says. “And the American and Japanese children would play together and go on picnics together and it really helped form wonderful relationships after the war. On Saturday mornings we also used to take the American Catholic children for religious instruction. The American people there in Sasebo were really very generous to us in many ways.”

Since returning home, Mary has spent the last 24 years engaged in community-based ministry in Balmain, including a long involvement with the Beginning Experience for widowed, separated or divorced people.

She says that being one of the pioneer Sisters of the Good Samaritan in Japan was one of the defining experiences of her life.

“It affected my whole life,” she says.

“I look back on it with thanksgiving because I really enjoyed it. It gave me an outlet for my missionary spirit. It enlarged my view of the world and the missionary aspect of my life.”

Mary says that when she returned to Nagasaki in 1998 to mark the 50th anniversary of the Sisters’ arrival, she was overcome with emotion and gratitude.

“We went into a building there with all the war-affected things and I just stood there and the tears rolled down my face,” she says.

“I think I was thinking of all the friends we made there and of the many converts to Catholicism we helped through our work, the people who supported us, and all of that just came over me. So many memories.

“The people there were a most grateful people, we found. They were so thankful for us being there among them and helping them with all their needs and worries.

“And now, despite everything that happened in the war, we have such a wonderful connection between the Japanese people and Australia, very solid connections and those connections live on, which is wonderful.”

Photos supplied: Archives of the Sisters of the Good Samaritan 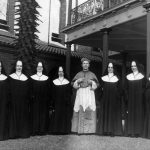 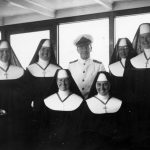 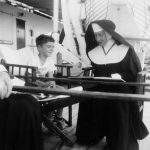 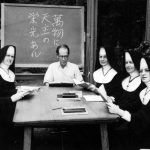 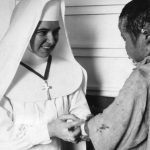 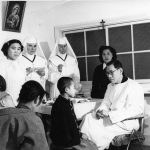