Appeal to help provide emergency food relief in the Philippines

The Good Samaritan Foundation has launched an appeal to raise funds for immediate emergency relief for poor communities in the Philippines who are at risk of starvation because of the COVID-19 restrictions which have affected their livelihoods, housing and nutrition.

The Sisters of the Good Samaritan have had a presence in Bacolod for more than 25 years, operating a Kinder School, providing food for the children at the local orphanage and operating an Outreach Centre serving people living in squatter settlements along the coastal shoreline of the densely populated city.

But, Executive Director of the Good Samaritan Foundation, Catherine Cresswell, said the coronavirus had changed everything.

“Local families, many living in small and overcrowded dwellings, are dealing with some of the toughest lock-down measures in the world,” she said.

“The restrictions have been particularly hard on the poorest – those whose homes are on the streets or in the squatter settlements. Employment has dried up and people are prevented from going out or travelling within the city. With no savings to fall back on, many families are facing the very real risk of starvation.” 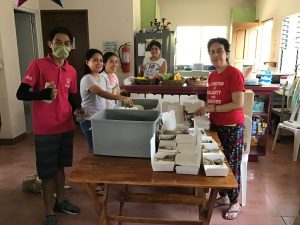 In the face of this crisis, the Good Samaritan Sisters in Bacolod have shifted their focus to providing immediate emergency food relief. “Right now, the Sisters are delivering more than 1000 food packs to families per week,” Catherine said. “In each pack the Sisters aim to provide two kilograms of rice, three tins of food and three packets of noodles. Where possible, fresh meat and vegetables are provided.

“Food packs are being delivered to the squatter settlements of Boulevard, Mambulok, and Henrietta and other vulnerable areas for families with access to cooking utensils. Hot meals are being delivered to people living on the streets. The nutrition program at the orphanage and support for Good Samaritan Kinder School and Outreach families continues.”

Catherine said that despite the seriousness of the situation, it was inspiring to hear how the community had rallied together.

“The staff of the Kinder School and Outreach Centre, Kinder School parents, community volunteers, plus our tertiary scholarship recipients are all pitching in to help alongside the Sisters,” she said.

The Sisters are also networking with other agencies, including the Social Action Centre, an agency of the Catholic Church in Bacolod. 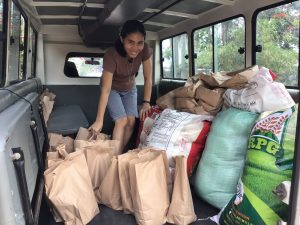 Good Samaritan Sister Grace Marcelo, who is part of the Good Sams’ ministry in Bacolod said the response to the COVID-19 humanitarian emergency was a true community effort, underpinned by the love and generous support of donors and supporters in Australia, Japan and the Philippines. “I look out the window and count a dozen willing people packing, counting, cooking. Truly amazing!” she said.

Sister Anne Dixon SGS, who has also served in the Philippines for many years, said the people the Good Sams were serving came from different barangays or neighbourhoods.

“Some barangays are supportive and some don’t care about their people,” she said. “We don’t care which barangay people are in. If they are hungry, we feed them.

“From our local squatter areas, we receive many ‘damu gracia ang Good Sams’, which translates to ‘We receive many blessings from the Good Samaritans’.

“People keep thanking us profusely every time we come. They are overcome that we haven’t forgotten them, that it’s not just a one-off.”

Donations to the Good Samaritan Foundation will directly assist the Sisters’ urgent work to support hundreds of hungry families in Bacolod.

The foundation was established in 1999 to provide ongoing finances and resources to the work established by the Sisters of the Good Samaritan. Donations over $2 are tax deductible in Australia. For more information or to make a donation, click here.