Shutdown a chance to do things differently at Santa Maria College

The Wall of Hope presented a life-giving message to the community. Images: Santa Maria College.

The importance of nurturing connectedness and hope during challenging times were two of the key lessons learned by staff and students at Santa Maria College in Melbourne during the COVID-19 schools shutdown.

And the initiatives that flourished in the school community during the past few months are likely to form part of the fabric of school life as students return to ‘the new normal’.

Santa Maria College is a Good Samaritan Education school in Northcote, and Deputy Principal – Learning Faith, Joe McCarthy, said Years 11 and 12 returned to school on May 26, with Years 7-10 following on June 9.

Mr McCarthy said that having embraced the Google Classroom suite of online teaching and learning tools some time ago, the college was in a good position to utilise those resources when schools closed and students were learning from home.

“When we were asked to move into the remote learning space, we had the resources and comfort to do that with some confidence,” he said. 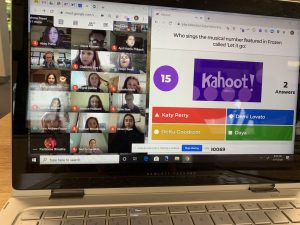 The bigger challenge was how to keep students, staff and parents connected as a community.

“On the last day that the girls were at school, our Principal, Deborah Barker, gave that message very strongly, asking us all to do whatever we could to stay connected with the school community and with each other,” Mr McCarthy said.

“And the other question we asked everyone to consider was how do we maintain a sense of being hope-filled in this challenging time and how can we be an expression of hope to the community around us here in Northcote?”

Mr McCarthy said some of the first things to emerge once students and staff were off-campus were online assemblies of students in villages, pastoral classes, or house groups.

“In some assemblies we would have up to 150 students on screen in that Brady Bunch style that we’ve all become familiar with,” he said. “The student leaders stepped up and played a terrific role.

“The parent forums were held in the evening, through the students’ Google Meet capacity, and were warmly welcomed. They were able to ask us questions and raise their anxieties or concerns.

“It created a real sense of dialogue rather than just information being directed at them. It allowed the staff to really engage with those questions and share what we were doing and bring a sense of calm to this very strange situation we all found ourselves in.” 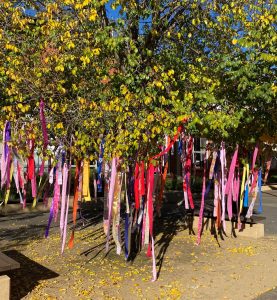 When it came to instilling hope, the students were invited to build a Wall of Hope on the boundary of the property, facing out to the busy local plaza, which carries a lot of pedestrian traffic.

“We invited the students to come up with messages that were hope-filled and we put them all together on the wall in a kind of patchwork-quilt style,” he said.

“The wall became an attractive and colourful space and presented a life-giving message to the community at this time. It was great seeing people read the messages on the wall as they walked past and if ever you were out there, people would comment and say how much they were enjoying it. They were appreciative of our efforts.”

Mr McCarthy said that as students returned to classrooms, the college had a strong desire to drill down and identify the key insights and learnings gained during the time of pandemic and to build on them going forward.

“The great positive, I think, the silver lining in all of this, is that it has been and continues to be an opportunity to do things differently and not just fall back into the old routine, and there’s a real energy in that.”