Book review: The Dance of the Dissident Daughter

Sue Monk Kidd invokes the suffragettes, the saints, the mystics and the scriptures in offering a richer, deeper, more satisfying theology than most of us have encountered, writes Tracey Edstein.

“Women who struggle for justice in religious structures, who dare to save the Divine from exclusive masculinity, who seek truth instead of defending dogma …”: it is for these women that Sue Monk Kidd shares her story – of awakening, of enlightenment, of incontrovertible truth.

This spiritual memoir is by turns reassuring, confronting, challenging and hope filled. It shows a way forward for those whose faith is strong but who find the version of Christianity on offer critically lacking.

On the evening of the day I finished reading The Dance of the Dissident Daughter, I went to Mass. The reading from Paul to the Corinthians proclaimed:

I shook my head and said “Seriously?” Yes, the text is of its time; but it is not of our time or our place.

Sue Monk Kidd, acclaimed author of The Secret Life of Bees (2001), is however, about much more than woman-friendly scripture and liturgy. She shares her journey “to discover and relate to the Feminine Divine, to heal feminine wounds, to unearth courage, and to reclaim her power …”

In short, Monk Kidd devoted years of her life to revealing the lost Goddess.

She is not creating the Goddess – Sophia, the Divine Feminine – rather, she is bringing to light the stories, the poetry, the dreams, the art, the mythology that has always been there, but which has not been acknowledged or transmitted in the way that the canon has been.

Why is this so?

Because it’s too demanding, too insistent, too provocative. To acknowledge that God is, as a Catholic sister tells Monk Kidd, “more than two men and a bird” is long overdue but not always a welcome insight. It requires an enormous degree of rethinking, reimagining, recasting, and letting go of what no longer sustains or enriches.

Monk Kidd’s words are for anyone, female or male, who senses that there is more to the story. She invokes the suffragettes, the saints, the mystics and the scriptures in offering a richer, deeper, more satisfying theology than most of us have encountered. 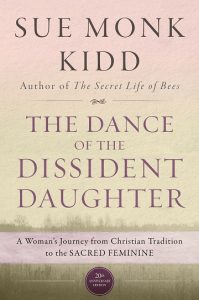 At times I found The Dance of the Dissident Daughter profoundly unsettling. And yet I was compelled to keep reading. One of the roles of religion is surely to unsettle and provoke. And it isn’t as if the Hebrew and Christian scriptures are not unsettling.

I recalled the story of Jephthah’s vow (Judges 11:29-40). Briefly, Jephthah promises God that if he defeats his enemy in battle, he will sacrifice “whoever comes out of the doors of my house to meet me when I return in triumph … I shall offer him up as a holocaust.”

Jephthah is victorious, and on his return home he is greeted by his beloved only child, a daughter, “playing the tambourines and dancing”. And yes, he sacrificed her although not before granting her wish for two months to mourn her virginity with her companions.

And that’s just one example.

Monk Kidd’s journey and insights brought much opposition, including, initially, from her husband. Even when she wasn’t sure her marriage would survive, she knew she had to continue, to be true to herself, and in so doing, like Shakespeare’s Polonius, she could “not then be false to any man” (or woman).

An important motivator for Monk Kidd was the legacy she would pass on to her own daughter, but it goes much further than that. She asks, “What will Divine Feminine symbols create among us when integrated into the symbology we now have? What new ways of thinking, living, and acting will emerge?”

An embrace of the Divine Feminine is not another layer of scaffolding on an existing framework, but rather a new creation: “See, I am doing something new! Now it springs forth, do you not perceive it?” (Isaiah 43:19)

I urge you to read The Dance of the Dissident Daughter, with the caveat that it won’t be a comfortable read. If you’re open to a whole new dimension of faith and theology, one that resonates with, and honours, the distinctive feminine experience, Sue Monk Kidd has much to offer you.

The Dance of the Dissident Daughter is published by HarperOne. For more information about the author, click here.

Tracey Edstein is a freelance writer and editor based in the Hunter Valley, New South Wales.

Listening and responding to the cry of the earth