May 2021
HomeMay 2021Chaplains called to be a ministry of presence

Chaplains called to be a ministry of presence

Mary O’Shannassy SGS received an honorary doctorate from Australian Catholic University last month in recognition of her service in prison ministry. In this issue, she reflects on the Chaplains’ ministry of presence.

My experiences of ministry in prisons are indeed privileged. Our ministry is relational, with trust the key component. Once trust is established and you’ve gained your credibility from the residents, it is holy ground on which we stand. To journey with the men and women is indeed to walk on holy ground.

I am privileged to share the stories, and to walk in the dark places of the lives of so many – many coming from societal disadvantage, mentally ill, with acquired brain injury, on the autism spectrum, with a history of trauma and abuse who have lost, or never had, belief in themselves as a worthwhile person: people who long to be accepted for who they are as they seek to re-ignite the flame and emerge from the darkness into the light. To look each one in the eye and to call each by name evokes a ‘magic’ response

I love the opportunity to build relationships with people who have experienced so many losses in their lives: loss of dignity, respect, opportunity of a job, a home that is safe – the anawim, the lost ones.

I love being with and working with these people. I love respectfully listening to their stories as no matter how horrific their life has been, it is their story. Being listened to validates their story and enables each to own their story, to see something of the goodness within themselves and to value who each is as a person, and then being open to being supported in working towards the next chapter of their life story.

I have experienced even some of the toughest presenting people visibly change as they are being listened to!

Being a presence in the prisons, meeting the women and men wherever they are: in their work places, walking the grounds as we listen to them ponder the different events in their lives is like the disciples with Jesus on the way to Emmaus. It gives them the opportunity to discuss their concerns, their anxieties and to have their eyes opened to new possibilities, to a different way forward for their lives. They may discover, like the disciples, that they need to turn around and take another ‘road’ on their life journey.

The symbol of our chaplaincy is a dirty, rough jagged stone which, when broken open, has precious stone on the inside. 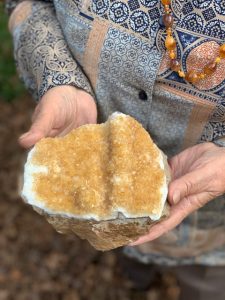 Our aim is to enable the women and men to come to understand and to see the goodness that is within themselves.

Whilst we can see it, we need to enable each person to find the goodness that is within themselves so that they can appreciate the person that each is, respect themselves and then come to respect other people as well as themselves.

As a Good Samaritan Sister, I have taken inspiration from the words and actions of John Bede Polding who established the Sisters of the Good Samaritan. Arriving in Sydney in 1835, Polding quickly showed his compassion, especially for convicts, Indigenous people and destitute women.

We read in our records that: ”Polding’s first care was for the convicts, and he arranged with the government that when a shipload of convicts arrived, the Catholics among them (about a third overall) should spend eight hours a day at St Mary’s for 10 days, being instructed and talked with by himself and his clergy. He spent long hours hearing their confessions and often had to be almost dragged from the confessional as the congregation waited for his Mass to begin.

“Bishop Polding would also often mount his horse after midday and ride off to some chain-gang or other band of prisoners at a distance, and to them he devoted the afternoon till nightfall.

“He might be seen mixing amongst them whilst they were at work, instructing them in the faith and gently winning their confidence by his kindness. Whenever men got into trouble, which they frequently did in those rough times, it was to Dr Polding that they went to help them out of it.”

In the words of Polding, the Sisters were established ‘to assist in the care of the penitents’. According to the usage of the day, ‘penitents’ was a term linked to the ‘penitentiary’ – an institution where the reforming of criminal behaviour was supposed to be achieved. (p 157 The Good Sams, Margaret Walsh.)

Initially, Polding was applying this to women ‘gathered from the streets’ who were placed in a place of refuge for protection and hopefully with a chance to reform their lives and make a new start.

Polding’s intention was that the Sisters would develop the work of care and reform.

The establishment of St Magdalen’s Retreat 1887 was in ongoing fidelity to the Good Sams’ founding purpose of care and reform. (Good Sams p 159)

“The Sisters will use all gentleness and compassion for the unhappy whom they are to tend.” (Constitutions SGS)

Polding’s words, to the first Sisters going to St Magdalen’s, at their profession indicate what their approach would have been:

‘If the world looks down on them, you do not … Take them by the hand as a wayward child, and if they have been accustomed to look down, teach them to look up … teach them the principles of a new life, to respect themselves.” (Good Sams pg 164.)

Later there was a change of name to St Magdalen’s Training Centre, mainly to reflect the changing needs of the times.

There were the young girls, who had adopted an attitude towards life that was unwise, that came from the courts. Others came informally through the police and still others were brought by their parents and guardians. Many were displaying very challenging behaviours and they were not easy to communicate with.

Whilst they were at the Training Centre it was seen as both important and necessary to provide an opportunity for the women to better themselves so that they could face society with confidence. They were encouraged to contribute by taking part in the different types of work. The skills learnt better enabled them for future employment.

It was this special work of the Sisters that was the inspiration and motivation for me to ask to be able to join them as a Sister of the Good Samaritan.

To read Sr Mary’s award ‘an honour for the whole of the chaplaincy team’, click here.

To read To Thine Own Self Be True: Sr Mary’s Occasional Address, click here.

Mary O‘Shannassy is a Sister of the Good Samaritan, privileged to be a minister of Christ’s mercy and a messenger of Christ’s compassion, with and amongst the residents in the prisons in Victoria. Mary has a passion for the restoration of the dignity of all people, especially those most marginalised in our society.