A childhood memory of an image of Mary in a leadlight window prompted Kate Englebrecht to question what it is that we humans fear so much at the spiritual level.

It’s no secret I’m afraid of snakes. I hate the blighters. I try not to, but I can’t help it. It’s not quite a phobia but I keep a closer eye than most on the long grass beside the track as I walk across a paddock or venture down to the river’s edge. I know they’re there and I know they’re not really all that interested in me. I know it’s not rational. I know they have every right to be here, on their own turf, on a warm afternoon. Nevertheless, I can’t stand them. It’s a fear that’s real and it’s a sudden wake-up call to realise, on an afternoon walk, that it’s a fear that’s been with me since I was very little.

I remember when it all started. It was December 24 and a hot summer’s night and I was about eight years old. The church was full of sweaty bodies and exhausted kids. We’d stayed up late to make it to the midnight Mass on Christmas Eve and the smell of incense and stale flowers floated in the still air. Despite the hour, it was always a better option to be dragged off to church at 11pm than have to wait on Christmas morning to open our presents.

Dad played the organ on Christmas Eve and we filed in behind Mum to the pew behind him as he sat bolt upright at the keyboard. I’d focus on his feet on the peddles and marvel at how he could play the keyboard with his fingers and the peddles with his feet; pull out stops and flick switches, keep an eye on the choir, and signal to the priest all at the same time. 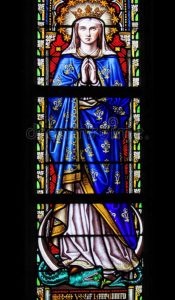 On this hot night I focused on the leadlight window behind him. Mary in the window, which was quite dark without the sun behind the glass, revealed clearly to me for the first time that she was standing on a huge snake. She was pinning it down with her bare foot! It was a hideous image. Absolutely terrifying. We’d grown up knowing better than to tread on a snake! I mean, one bite from a brown that big was certain death. In my young mind, Mary, Mother of God was making a huge mistake. She was as good as dead. My fear had a focus that night, and I fed it regularly.

Out walking, watching constantly for snakes, I had a sudden insight about my experience of fear and wondered what it is that we humans fear so much at the level of the spiritual.

My fear was much like a snake lurking in the grass. It might appear suddenly, unexpectedly, without warning. It might just sit there, quiet but present, and wait for my guard to drop. How ever it behaved, it was always real, always just there under the surface.

On that late summer afternoon, it occurred to me to wonder what it was I was actually afraid of? Why the snake under Mary’s foot? What had she conquered, symbolically, in that leadlight window of my childhood? What was my deepest fear? If not the snake itself, what kept me so afraid? What needed to be exposed, destroyed, conquered, under my foot?

What does the snake symbolise? We’re told the Serpent in the Garden of Eden represents Satan, the Master of Lies. The Deceiver. The Evil One. The dark constant threat of the destructive power of ego. The one, within us all perhaps, who has the capacity to ignore the good, to choose wrong, to act appallingly. The one, within us all, who can say No to God and Yes to our own destructive wilful, arrogant, egoistic selves.

Mary crushed that Master of Lies beneath her foot. Her decision to choose to trust her deepest intuition of her God-bearing potential gave her the courage to stand against that wicked temptation and destroy its power to control and manipulate. Mary crushed the deepest fear in us all.

She stands now in leadlight windows around the world as testimony to the power of women, and men, to triumph over egoic deception, the corruption of power, and the human capacity to ignore the call of the Divine to give birth to a new way to live. She stands strong and courageous in the face of all that distracts us from our own internal Yes to the great Mystery of Divine Union with God.

Perhaps it is right to be afraid of snakes. It pays to be on the alert, always watching, always ready, always just a little afraid of our own capacity to nurture, within, our very own Master of Lies. Mary restores our honour, points to a new way, models a willingness to boldly go where others have failed to go before. She repairs the balance, opens the opportunity for transformation and stands tall and defiant in the face of any threat to separate her from God’s indwelling promise.

She’s not demure, she’s not compliant, she’s nobody’s fool. She knows the power of the darkness within, she knows of what she is capable … but she chooses to overcome that fear and lead where others have never gone before. She becomes ‘Mother of God’. The one who shows us all how to begin the journey home, the one through whom the Divine enters and transforms.

I’ll probably always be afraid of snakes, and I will do all I can to avoid treading on one; but maybe, just maybe, I’ll learn not to be so afraid to be my deepest self. I’ll learn to say Yes as Mary did and begin the journey home without fear or hesitation or shame. Maybe, just maybe, we’ll all triumph over ego and counterfeit ways and come home to our deepest selves and stand courageously in the face of all that tries to deceive and distract.

Maybe that snake isn’t quite as terrifying as he used to be, maybe I’ll just channel Mary and fearlessly enjoy the garden for a while.

Kate Englebrecht has a passion for the writers at the heart of the Christian spiritual tradition and seeks to incorporate and combine learnings from that wisdom tradition into pastoral formation and leadership. She has tutored in Christian Spirituality at tertiary level and has had experience in prison chaplaincy, Church leadership as a diocesan chancellor, and mission leadership in the education and health sectors.

What is it about women and the Church?