Religious Sisters have joined their voice to that of the Archbishop of Yangon, Cardinal Charles Bo SDB, in pointing to the resurrection as a reminder of hope and praying that this Easter will start the process of healing the strife-torn nation of Myanmar.

Burma-born Good Samaritan Sister Geraldine Kearney, who has been in touch with religious Sisters in Myanmar, says the situation following the military coup in February this year is dire, but the Sisters still pray that peace can be achieved.

UCANews reports that in his Easter homily, Cardinal Bo called on the people of Myanmar not to give up hope, as he assured them their struggle would succeed.

“The Way of the Cross of Myanmar will never go in vain,” he said. “It will end in the resurrection of freedom, democracy and peace and prosperity to all.

“Hundreds have been killed. A bloodbath has flowed on our sacred land. Young and old and even children have been mercilessly killed.”

The South-East Asian nation has had daily pro-democracy protests following a February 1 coup that abruptly ended a 10-year democracy experiment and has seen it become a pariah state, UCA reported.

More than 700 people, including 44 children, have been killed and more than 2600 arrested since the military takeover, according to a rights group that monitors casualties and arrests. One nun, Sister Ann Rose Nu Tawng, captured the world’s attention when she was photographed on her knees, pleading with soldiers not to shoot young protesters.

Deposed leader, Aung San Suu Kyi, who won the Nobel Peace Prize in 1991 for her efforts to bring democracy to Myanmar, has been detained since the February coup.

The ABC reports that earlier this month, she and her Australian economic adviser Prof Sean Turnell were among several people charged with breaking Myanmar’s official secrets law. Aung San Suu Kyi also faces a clutch of more minor charges. Her lawyer revealed the fresh accusations as the United Nations Security Council was warned that Myanmar was at risk of civil war and an imminent “bloodbath” if military rulers continued to violently repress the protest movement that has emerged since the coup. 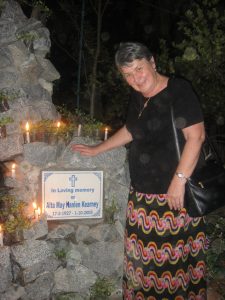 Geraldine was born in Rangoon, the largest city in what was then known as Burma, now Myanmar. Her parents of Anglo-Celtic-Burmese decent were also born and raised in Burma; her father a senior driver in the railways (declared in despatches for bravery during World War II) and her mother a teacher.

Geraldine lived in Burma until her family migrated to Australia in 1952 when she was aged four. She says it is heartbreaking to watch the violence tearing Myanmar apart.

“It has been a long and rugged history for poor Myanmar,” she says. “For those of us who were ‘half-castes’ with connections to colonialism, the writing was on the wall. My father’s foresight forged a new path for us for the future.

“When I first went back to Myanmar with my mum in 1996, it wasn’t open for tourism and visiting much, and you were followed everywhere. In 1997, I went back to teach English for four months and that was a scary time. You couldn’t enter as a Religious. The Catholic schools had all been closed in the 1960s and it was very difficult.

“I’ve been back on and off since then, working with some Congregations and I know that right now they are very frightened.”

One superior of a Religious Congregation passed on a heartfelt prayer to Geraldine in which she pleads for God to bring peace and justice to Myanmar.

“We were condemned to death in 1962 by Socialism; we were oppressed, chained, no voice, no expression; living lives without breath, closed doors, cut off from the world and giving birth to rebels,” the Sister wrote.

She spoke of the people being inflicted with intellectual poverty with the nationalisation of the religious schools, moral poverty with the stripping and selling of Myanmar’s natural resources and corrupt policies, as well as ongoing violence and killings.

“Mothers have to embrace their lifeless sons and daughters, and mourn for the beloved, heartbroken for the tortured and wounded children; jailors are nowhere to be found,” she wrote.

In her final prayer, the Sister said: “Grant us the grace to be able to say, like you, ‘Forgive them Lord, for they don’t know what they do’. How can we achieve and obtain inner freedom? We cannot see tomorrow clearly. Before going to bed, we must say, ‘Into your hands Lord, I commend my spirit’. Save us Lord, when we are awake; protect us while we sleep; that we may keep watch with Christ and rest with him in Peace.”

Geraldine says the Church plays an important role in speaking up for the rights of the people of Myanmar.

“The Church is all for the people and against those who’ve seized government,” she says. “And the (Buddhist) monks have always been on the side of Aung San Suu Kyi.”

Geraldine says that while it is easy to feel helpless in the face of the ongoing killings, violent protests and political upheaval in Myanmar, the worldwide community of faith can play a role of prayerful solidarity and support.

“One thing we can do to support the people and the Religious in Myanmar is to keep shining a light on what’s going on and, of course, to pray.”

Cardinal Bo called on the young people who had been leading the pro-democracy protests to adopt non-violent methods and not to die unnecessarily.

“If you live long, democracy is strengthened, the evil is weakened,” he said. “Let a new Myanmar of peace and prosperity rise from the grave of hatred and darkness.”