Clare, who began her term as president in March this year, has had a long association with ACRATH. As president of Catholic Religious Australia in 2007, Clare helped ACRATH to become an incorporated body under CRA’s umbrella, thus securing vital government funding to carry out its work of advocacy on behalf of people who have been trafficked or subjected to modern slavery practices. 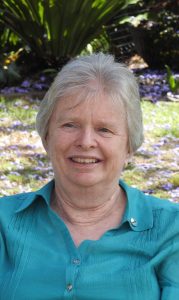 “It started out from the desire of a group of mainly women religious to do something about this problem,” she said. “Over the years it has made a lot of ground and I think it shows what a small group of people can do to help right a wrong.”

ACRATH’s commitment to its mission over many years has seen it earn a place on the Federal Government’s National Roundtable on Human Trafficking and Modern Slavery and a voice at the United Nations.

Among the achievements ACRATH has worked towards, along with other community organisations, was the recent introduction of the federal Modern Slavery Act and the New South Wales Modern Slavery Act. ACRATH is now consulting to the ACT Parliament, which is also working towards introducing a similar bill.

ACRATH’s National Executive Officer, Christine Carolan, said being part of a network working towards the national Modern Slavery Act showed what can be done when people unite for good.

“We had done a lot of work in Canberra, advocating with MPs to include various aspects into the Bill, so it was a big day when the law made it through the Parliament,” she said. “And while it didn’t contain everything we would have wished for, it did include the requirement that the modern slavery reports are publicly available on an easy-to-search website; it also includes the provision that the Federal Government is required to respond to the Act.”

“It was such an encouragement to find other people who think likewise on the issue of slavery and trafficking, and to work with them. And it showed that we’re in this for the long haul.”

Christine said ACRATH was also working on other long-term campaigns, including providing advocacy and assistance for migrant seasonal workers to earn a just wage and highlighting the child slavery involved in the production of much of the world’s chocolate.

“When we first started talking about chocolate and advocating for people to buy slavery-free Easter eggs, this wasn’t being talked about at all,” she said. “Now, 14 years later, it is much more in the public consciousness and people are much more aware of looking for the Fair Trade, UTZ or Rainforest Alliance logos when they buy chocolate, so that’s been really encouraging.”

Retailers, such as Aldi, Haigh’s and some IGA supermarkets have also responded by selling slavery-free chocolate for Easter.

An emerging issue is the slavery involved in the production of batteries for computers and mobile phones.

“We know that there’s slavery and the worst form of child labour involved in the mining of the cobalt for the production of these batteries,” Christine said. “These are very complex issues because these children are sent to work in these mines to help support their families.

“People are now starting to look at ways we can get these kids out of the mines and into school. How can the economy in that place be reconstructed so that the children’s income is not needed for the family to survive?

“ACRATH is only a small organisation, but we’re good at linking arms with other groups and things are starting to happen.”

Clare, who has been a member of the ACRATH national committee for the past two years, said one of the key tasks during her term as president will be to continue implementing the structural change begun by previous president Sister Louise Cleary CSB.

“Under Louise’s presidency we looked at reviewing the association’s structure and moving it more clearly towards a model that separates governance and management, so we’re going to be transitioning into that,” she said.

“There has also been a predominance of religious women – a few religious men, but mostly women – and we’re looking to move it towards a more lay-governed organisation. We see that as one of the main tasks going forward.

“We have a lot of lay people who are members, so we’re looking to find ways in which it can remain a voluntary organisation but with appropriate recompense for people who take on responsibility.”

Funding is necessary to achieve this aim, and three years ago, ACRATH stopped receiving Federal Government funding due to changes in the grants scheme.

Clare said one of ACRATH’s great strengths is that it grew from on-the-ground ministry experience with people who had been trafficked or been affected by it.

“That sense of ministry continues and one of the great strengths of ACRATH is our Companionship Program, where we have more than 30 people who are companions to people who have survived trafficking, mostly women,” she said.

“It feeds into ACRATH’s real experience and understanding of the stories of people, and that assists in our advocacy. It’s always been a grassroots association and that’s what we’re hoping to build on and develop for the future.”