After almost five years of consultation, planning and construction phases, the Good Samaritan Sisters’ new convent at Glebe in Sydney – St Scholastica’s – was blessed during a small but significant ceremony last month.

The new contemporary-designed convent is a stone’s-throw from the historic Toxteth House – the Sisters’ ‘mother house’ from 1901 and now their congregational centre – and sits on the former Polding Villa site, which opened as an aged care facility in 1974 and closed in 2005.

Set over two storeys, the interior of St Scholastica’s is spacious, light-filled, uncluttered and homely. It has 12 bedrooms (most with ensuites) and two independent units, a central open-plan kitchen and dining area, three smaller communal living areas with kitchenettes, and a dedicated prayer space – or oratory, as the sisters are calling it. The building also has disability access, a lift, and a parking area in the basement.

Sister Catherine McCahill, a member of the Good Samaritan Sisters’ leadership team, said the new convent will be home for a community of sisters and a place of hospitality for sisters and others visiting from overseas or interstate.

“There was a need for a community house here that would offer the possibility for some of the sisters who live in it to ‘age in place’, so it needed to be suitable for their older years,” she said.

“But it also needed to be suitable for hospitality too, for people from age 25 upwards, and a place that can be home for us, so that when we come, we can feel at home in it.”

In building a new residence, Catherine said the Sisters wanted to reduce their environmental footprint as much as possible, particularly through the building’s design and materials used.

“The design of the building itself is ecological, in terms of just the layout. It’s designed so that it gets the best air flow, particularly afternoon breezes off the bay,” she said.

“[The building is] mostly [made of] concrete slabs, floors and walls which create a thermal mass so that temperature doesn’t fluctuate in the same way as it does in other building materials. [The concrete] holds the temperature at a much more even level.

“The other feature is there’s a large number of [rooftop] solar panels so there should be more than enough solar energy for use of the building itself – and that was a significant commitment that we made.”

Catherine said the Sisters were also conscious of building a residence that would “blend in with the streetscape”.

“We didn’t want to build a Federation house, but we wanted to build something that was compatible with what else was in the street,” she said.

Having garden areas surrounding and within the convent was another important feature. So what was a carpark has been converted to “a garden that’s sustainable and ecological, but also that enhances the beauty of the streetscape”.

According to Sister Cecily Pullen, one of the eight sisters who moved into St Scholastica’s in July this year, the new convent meets the needs of a religious community of women in the 21st century.

“The most recent convents I have lived in have been ordinary houses which have been adapted as well as could be to our needs as a religious community, but with varying degrees of success,” she said.

“This building has taken into account the needs of a religious community in the 21st century both as far as personal needs are concerned, and the needs of a community of women living together.”

“The convent is spacious,” she said, “[and] the community living areas, dining room, oratory, common rooms are away from our private living areas, so that our own rooms are places for privacy and quiet… Our oratory is very beautiful and central to our life as we pray together.”

Cecily believes it is important to have a community of sisters living at Glebe on the same site where the Sisters have been since 1901, when they moved from their very first convent in Pitt Street, Sydney.

“It has been suggested that this is our sacred site, so it is good that this community is here,” she said.

“The proximity to Toxteth House and St Scholastica’s Chapel places us at the centre of the congregation.”

Sister Maree Stanley, another member of the new community, agrees wholeheartedly. She has lived at Glebe a number of times throughout her religious life and loves the area, the people, the local community spirit and the suburb’s close proximity to the city.

But more importantly, Maree regards Glebe as a significant part of the congregation’s history; she values the connection with the early sisters and their work.

“I felt it a privilege to be chosen to come here,” she said, “because after all this is our main house in the congregation.

“I just like the whole atmosphere and the history of the place – not only of this new place, but of this whole lane, this whole Toxteth area, the whole of St Scholastica’s – the college, the offices and the new building.

“I think it’s such a privilege to be in this place where the earlier sisters built it up and we’ve kind of come in at this stage of time.”

Two aspects of the new convent that are mentioned frequently by many are the oratory and the garden, two spaces that are also closely connected.

“The oratory is a beautiful space,” said Catherine.

“[It] opens out into the garden… [and] connects with the natural world, connects with God’s creation… When you’re in the oratory you’re aware of the outside world.”

For Maree, the simplicity of the oratory creates an atmosphere for prayer and contemplation.

“It lends itself to silence and it’s a prayerful area,” she said.

“We say office there every morning and evening, and it kind of makes you feel you really want to pray there.”

And of the garden, Maree describes it as “a little pocket of paradise!”

“It’s just beautiful. All the little plants are beginning to burst into little buds and to come out… Everything out there is just gorgeous.”

The new community of sisters at Scholastica’s Convent are still settling into their new home, but are very pleased to be there and have already begun welcoming sisters and others to share in their community and prayer life.

“It is good to be here,” said Cecily, “and I am full of hope as we grow as a community together.” 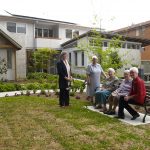 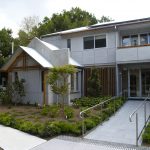 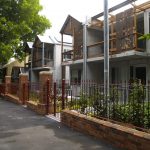 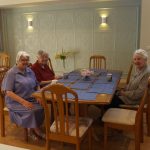 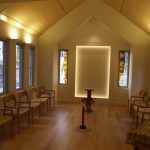 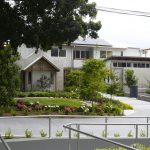 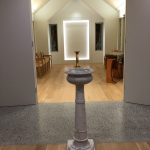 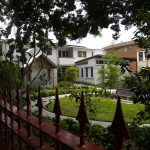 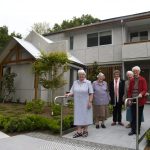