On the brink of everything

Parker Palmer’s book On the Brink of Everything on ‘grace, gravity, and growing old’ was the inspiration for bringing together my thinking about a recent retreat experience, writes Alice Priest.

As a member of humanity, I feel the precarity of being on the brink of everything. The brink of pandemic’s disease and death, the brink of climate catastrophe, the brink of world war. How does one see and exist on the brink? Where is the spiritual space to be found – the place which shifts our vision and finds faith and light in the brink’s enveloping darkness? 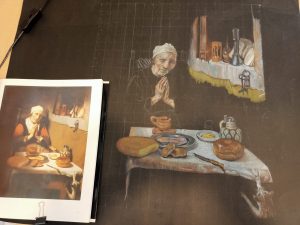 On a retreat about a year ago I was literally drawn into a contemplation of Dutch Master Nicolaes Maes’ 17th Century painting, variously titled, An old woman praying, Old woman saying grace, The prayer without end, when I began a hand-drawn reproduction of the work.

Having first studied, then been entranced and intrigued, by the scene which newly emerged from the ends of my coloured pencils, I could think of only one more title that fitted: On the brink of everything. It was in this unlikely centuries-old artwork that I found the framing of a precious way to navigate this precarious place.

When I first met the old woman of Maes’ painting, praying or saying grace, I was drawn to its quiet mood, darkness and sombre tones as much as to the poor old woman – perhaps reminiscent of my grandma, and the fantastically real still-life elements. I had begun the outlining and rendering of the woman’s face some time before my retreat; I took the abandoned and uninspired beginning with me, knowing that there would be no TV and a lot of silence in my week away. 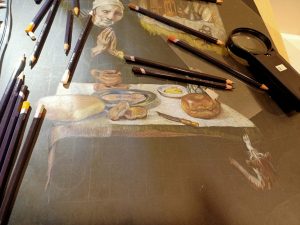 The natural light streaming into my cabin made for a great studio, and along with the discovery of a lighted magnifying glass (‘for seniors and low vision guests’) in the bedside drawer with the Bible, I soon had my old woman unfurled on the all-purpose table and began with her again.

The pandemic had been wearing on my vision (as well as my eyesight, which had deteriorated 2 steps) and draining my spirits. The retreat was a gift from my work in education, formation and liturgy, to bring me back from the brink of burn-out and redress my difficulty in seeing well. As I drew, I discovered both just how far out on the brink I was and how low my vision had dipped.

As I began my retreat into quietude, into morning prayer with the Marist brothers, into moving about the autumn trees in the open air, I spent some hours each day drawing my way into that room with the old woman in prayer. By week’s end, she and I both emerged transformed.

All I had seen when I had first begun my reproduction was a woman in enveloping darkness, in sustained silence: the religiosity, piety even, of the figure. All I had seen was a poverty in her and her dining table. I had seen only her great age and imagined only her great loneliness. In the action of drawing and the contemplation of my retreat, I came to see again. I came back from my own over-burdened edge with some of the keys to managing a life on the brink of everything.

I laughed when I discovered under my lighted magnifying glass that the ugly mole I had first drawn on to the poor old woman’s neck at home was actually, in Maes’ original, not a mole at all but the rich pearl of her pearl drop earring. I was incredulous at myself. How could I not have seen that?

Seeing again, she was not at all the impoverished woman I had painted her to be in my mind’s eye. She was bejewelled. Her hair, peeking out of her cap, covering her right ear, was not the expected grey but demanded a vibrant, ruddy-toned pencil – perhaps she was not even so old, or was able to afford the newly fashionable hair dye of the Renaissance.

The woman’s table, which I had first seen only as austere, was drawn out in all its delicious generosity and abundance. She has the most enormous wheel of cheese, a large round bread loaf, two bread rolls, a tankard of beer or wine, a heaping of butter, a pitcher pot of soup, and a beautifully pink, large, fried salmon cutlet before her. How had I seen paucity here? I began to realise that I could hardly see at all beyond the projections of my own emptiness and hopelessness. I began to understand that my vision has been conditioned to see old, pious women (and my own inevitable future?) in a particular, gloomy, light.

Then there emerged under my hand the tome on the shelf, the pewter candlestick, the hourglass, the illuminated open Bible, and the prominent bunch of keys, which I had also quite overlooked on first view. Item by item, I drew this woman out of the intellectual, social and economic darkness I had cast her into. She could read that Bible, and no doubt write too, suggesting her secure financial status. Interestingly, I discovered that 17th Century Holland, along with England, were the two exceptions (>50%) to Renaissance Europe’s low (< 20%) literacy rates.

The keys, of which there are many, hung beside her, suggesting her responsibility and acumen for managing the business and life of the house. I began to see this woman as her own keeper: master of her own moment. In her time, the land and waters of the Dutch were booming with merchant seafarers and traders. According to Irene Cieraad (2019), Rocking the Cradle of Dutch Domesticity: A Radical Reinterpretation of Seventeenth-Century “Homescapes”,

seamen’s wives were far from docile creatures who stayed in the home. They had a special legal status as being competent to make decisions on their own and often had to make their own living to get by (De Wit 2010). As loyal and equal marriage partners they were expected to take care of the house and their financial affairs during their husbands’ long absences (De Wit 2008: 201; Van der Wal 2008: 39).

I began to see that she is not alone. She has, perhaps, an absent husband held in prayer; she has books, autonomy; she has her pussy cat companion; and she has her God. 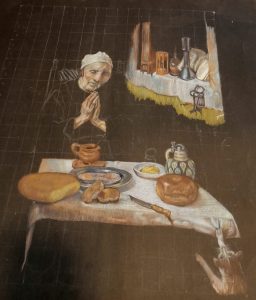 I began to see my own life in the arrangement of the scene … not only was she about to dine on many of my own favourite foods, but, more so, I saw through the shroud of silence to the chaotic brink of everything Maes had painted in. The keys, arranged like standing dominos in their bunch, about to clink and jangle against each other. The knife, set to cut, sitting precariously on its sharp edge, its handle hanging over the table edge. The huge heavy cheese wheel also only half perched on the table top, balanced at tipping point.

And then there is the cat, forelegs outstretched, claws catching in the corner of the linen tablecloth. In less than a moment, the artist’s eternity of quiet, frozen in this scene, would be brutally disturbed by a sudden, violent and calamitous cacophony of noise and chaos as the cloth pulls away, the knife cuts through the air, the cheese wheels to the floor, the soup spills, the bread breaks, and the old woman’s eyes start open, her hands and mouth turning from prayer to exclamation before a hopeless grabbing at the cloth to recover order and rescue her dinner. The silent, calm presence which prevails in this scene has been perfectly, intentionally, and carefully captured within a context of impending chaos: standing on the brink of everything.

The woman at prayer only has a moment before the world breaks in again, the bread is broken, the wine pours out, and the brink is breached. Yet grace is now everywhere, no matter what.

The old woman may admonish the cat, but I see her patience too within her calm composure, a softness hiding behind her scolding, and a quiet confidence in her ability to rearrange things, clean up the mess and proceed. Later, the cat might even make it back on to a welcoming lap – I like to think so.

This fulsome table, the hanging keys of responsibility, the resources on the shelf – this is life. At any and every moment, our carefully arranged order and well-intentioned work, even our prayer, is set to be disrupted. This is life. We are living on the brink of everything. We must find grace there too.

On the brink of everything, the old woman imposes calm and divine connection. She closes her eyes and clasps her hands with intention, gives thanks, blesses all before her, including the impending chaos, the breaking bread. With her prayerful pause, her recognition and activation of grace, she shifts to the vision of a world beyond what we think we see. It may only last a moment, but as for this painting, a moment emulates eternity.

Each day, it seems, she draws on her faith, her resources. The open Scripture is a source of light, and I love that she is at home, in the place where life is lived and worked every day. She finds forgiveness, grace, and peace and quiet not only in the Church, but here in this worldly house of God, in the midst of her responsibilities, in the breaking of her daily bread; on the brink of everything. I want to do the same.

*It was Parker Palmer’s book of this name On the Brink of Everything on ‘grace, gravity, and growing old’, that was the catalyst for my appreciation that the brink was where I knew I was, where we are, and where our spirituality must be. It was the inspiration for bringing together my thinking about my retreat experience with this drawing.

Alice Priest is a religious educator with more than 20 years’ experience across a range of settings – from the classroom to youth ministry and teacher education. She has lived and worked in Catholic school systems and ministries in Italy, Germany and Australia. Alice is currently working at Monte Sant’ Angelo Mercy College in Sydney, where she teaches religion and English, and is head of faith formation and liturgy.