People who attended a recent webinar hosted by the Good Samaritan Foundation have responded strongly to moving first-person accounts of daily life in Good Samaritan ministries in Australia and overseas, writes Debra Vermeer.

They heard from Sisters Anne Dixon SGS and Grace Marcelo SGS from the Good Samaritan Outreach Centre in Bacolod, the Philippines, about the number of hungry people they try to assist daily, as well as assistance for children to attend school and the work they do with women in prison.

Caseworker Georgia Tarquinio from the Good Samaritan Inn described the challenging work of supporting women and children when leaving violent and abusive homes. 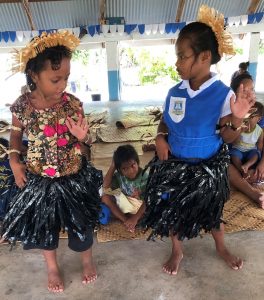 Sister Taabeia Ibouri SGS is from Kiribati where two communities of Sisters run a preschool and offer pastoral care in villages and centres for people with disabilities. The Sisters are also involved in pastoral support of prisoners and people with mental illness. Taabeia spoke about the personal impact of climate change for her Pacific Island home.

Chair of the Good Samaritan Foundation Board, Katrina Flynn, said it was the first time that a Partners in Ministry update had been held online, but its success meant it would not be the last.

“For us, it was just ground-breaking; using technology to reach out to students and other stakeholders,” she said.

“In the past our Partnership Updates have taken the form of a morning tea and we haven’t been able to include students so to have so many people, especially young people, take part was really fantastic.

“And of course, it allowed us to beam in Anne from the Philippines and Georgia from the Good Samaritan Inn in Melbourne to share with us the work they are doing in their ministries, which was another huge benefit.”

Year 11 student at St Mary Star of the Sea College in Wollongong, Haryse De Jesus, said Anne’s presentation on her ministry in Bacolod touched a personal note with her. 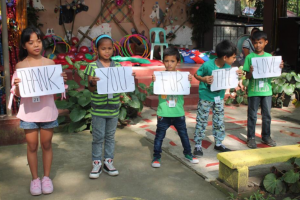 “I have Filipino heritage,” she said. “And I knew a little bit about how the Good Sam Foundation was helping poorer children, but it really opened my eyes to how much more is needed. I actually found it really emotional.”

Haryse said the presentation had sparked a desire among her friends to respond to that need.

“We’ve already been talking about creating some initiatives to help and support the work they’re doing over there,” she said. “As soon as the girls heard first-hand from all the different people who spoke to us it made them want to do the same thing.”

Yasmin Baghdadi, also in Year 11 at St Mary’s, said the webinar shone a light on some of the ministry projects students had been supporting.

“Now I feel that I’m really connected with exactly what the Foundation is doing and the opportunities it gives us to help, not only while we are at school but as an independent adult too.”

St Mary’s student Tayla-Rose Donachy said one thing that struck her about the volunteers working with Anne in the Philippines was how happy they looked.

“They obviously loved what they were doing and that was really infectious. Also, I could see that a lot of what Sr Anne is doing is just spending time together with people and helping them.

“It inspired me to spend more time with my peers and really listen to their needs and think about how I can help.”

Madeleine Edwards in Year 11 said she was struck by how broad the Good Samaritan ministry in the Philippines was, ranging from the Kinder School to prisoner support, the nutrition program and small business support. 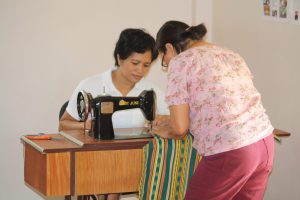 “It was interesting to speak to the Sisters about what they do on a daily basis, especially during the COVID-19 pandemic, because it’s had a really big impact over there,” she said.

Year 10 student Isobel Bowman said she felt the webinar helped students to engage first-hand with the people running the projects that her school supports.

“Students are contributing to these causes but often can’t actually see the root of the problem,” she said. “It was an opportunity for us to ask questions and learn more.”

Isobel said the presentation on the Good Samaritan Inn contained some shocking statistics about the reality of domestic violence.

“To hear that one woman every week in Australia dies from domestic violence is really appalling,” she said. “I’d never heard that before and it’s important that as young women we are educated on that side of the problem and on what’s being done to help women escape domestic violence.”

And Year 10 student Luciana Romanski said she was impressed by the multiple programs being supported by the Good Samaritan Foundation to help those less fortunate.

“The Sisters and others working in the Foundation’s programs are true role models,” she said. “They bring so much light and happiness into people’s lives.”

“I’m sure people were moved by it, because I know I was and I’m already familiar with the ministries and the work being done,” she said.

“But for the school students in particular, it was very strong. Words say one thing, but pictures and conversations say so much more. To be able to tell the stories so that people could know what they were contributing to and what they were supporting was very powerful.”