Good Samaritan Sister Mary O’Shannassy OAM received an Honorary Doctorate from Australian Catholic University in recognition of her service as Director of CatholicCare Victoria’s Prison Ministry and in prison chaplaincy. The graduation ceremony took place at the Melbourne Convention and Exhibition Centre on April 29, 2021.

The ACU Honorary Doctorate degrees recognise individuals who have provided outstanding contributions to the community and to humanity.

Mary’s conferral was in recognition of her loving service to people imprisoned in Victoria, her contribution to the recognition in Australia of the dignity of each person, particularly those who are imprisoned, and for her leadership in chaplaincy for all prisoners in Victoria. 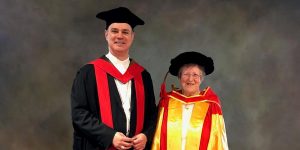 As Director of CatholicCare Victoria’s Prison Ministry, Mary leads the chaplaincy team in the state’s prisons – the equivalent of six full-time chaplains, 10 volunteer chaplains, 70 volunteers and 40 priests on roster for the Sacraments in the 15 prisons.

Mary said it was an honour to be recognised. “Prison chaplaincy has been 27 years of my life and my whole time in prison has been one of learning and privilege.

“To me, it is an honour for the whole of the chaplaincy team throughout Victoria because I believe the leader is only as effective as the individual team members. I am very grateful for the people who considered me and put my name forward.”

ACU Vice-Chancellor and President Professor Zlatko Skrbis said Mary’s doctorate reflected the university’s mission to pursue the dignity of the human person and the common good.

“Her tenaciousness in providing spiritual, emotional and physical succour of prisoners and their families is legendary. Her work in prisons and in advocating for the wellbeing of the prison community is done with compassion, dignity and altruistically. She is one of the unsung heroes in working for a better society and providing support for a group of people often despised by others.”

Most Rev Peter A Comensoli, Archbishop of Melbourne, said: “Sr Mary is indeed a ‘doctor’ – a doctor who has gone out to the edge; a doctor of compassion and care; a doctor who listens; and as Pope Francis says, someone who heals wounds and warmly welcomes the weakest. This is a wonderful recognition of Sr Mary’s ministry and a truly well-deserved honour.”

For Mary, prison ministry is essentially a ministry of presence, hospitality and compassion. “As Chaplains we are there for the women and men as a supportive presence. Prison is people, people from all walks of life, many of whom have made just one wrong choice. The chaplains are enablers, messengers of hope, Ministers of Christ’s mercy and compassion.

“Those people in the prisons come from very diverse backgrounds: many are young and part of the drug culture, underachievers and ‘drop outs’ from school yet who, in the ways of crime, learn very quickly and become very skilled at their ‘trade’ as they call it.

“Many are on the autism spectrum, intellectually and mentally challenged, from low socially disadvantaged backgrounds.

“As we encounter the other there is the sacredness of presence.”

“One of the tasks is to listen compassionately and creatively to the hidden silences. Often secrets are not revealed in words, they are concealed in the silence between the words or in the depths of what is unsayable between two people.” John O’Donohue

“The gift of the ability to listen is something that, as chaplains, we offer to people,” Mary said.

“I have a constant companion with me each time I visit the women and men in the prisons. I couldn’t do this ministry alone – Jesus is with me. It is not my work, but that of the spirit of the Lord working through me. Prayer support is important. All could join in prayer support for chaplaincy in the prisons.”

“Sister Mary has committed her life to working with some of the most despised people among us: the anawim, a Hebrew word for the people on the margins of the Church and society. Literally ‘the Poor Ones’.

“Her work exemplifies a lesser-known aspect of the parable of the Good Samaritan: while it’s so important to care for the victim, it’s also important to prevent future victims. She has devoted herself to rehabilitating the likes of those who caused havoc in the story, and in doing so, helps to break the vicious cycle of disadvantage for the betterment of society.

“Sister Mary does this vital work by enabling prisoners to discover the goodness within themselves and to reclaim their dignity. She is a minister of Christ’s mercy and a messenger of hope, helping prisoners to understand God’s great love, care and forgiveness.

“It isn’t hard to see why Sister Mary stands out within her field of prison ministry. Not only does she inspire incredible transformations in prisoners, she is a leader of multiple generations of chaplains.

“She has been responsible for recruiting, mentoring and coordinating within Catholic prison chaplaincy, and has performed extraordinary diplomacy between prisoners, prison authorities, and the Church.”

As Convenor of the Chaplains’ Advisory Committee established by Corrections Victoria, Mary has worked with and influenced chaplains of all faith groups in the Victorian prison system. Thanks to her work, a chapel for use by all faiths is now included in plans for any new or expanded prison in Victoria.

To read To Thine Own Self Be True: Sr Mary’s Occasional Address to graduates, click here.

To read Sr Mary’s reflection Chaplains called to be a ministry of presence, click here.

May we be a compassionate presence in the world