Jill Finnane retired recently from her role as Eco-Justice Program Coordinator and Pacific Calling Partnership Coordinator for the Edmund Rice Centre. She spoke to Debra Vermeer about her eco-justice work.

In a lifetime of social activism, Jill has been a passionate advocate for Pacific Islanders under threat from climate change, Australia’s First Peoples and the challenges they face, as well as sustainable development, and as she steps down from her formal role, Jill has no plans to walk away from the causes or the people.

But she says she will continue “dabbling” in the causes which mean so much to her. “My husband says if I don’t keep dabbling, I’ll get boring and bored,” she laughs.

Jill, who was born and raised in western Sydney, first felt drawn to social justice issues during her schooling with the Marist Sisters in Woolwich.

“We had a lot of country and international students at the school – from Papua New Guinea, the Solomon Islands, Thailand and New Caledonia, among others,” she says. “It was a great experience to have a range of nationalities at school and it did broaden our horizons beyond our own backyard.”

After school and teacher’s college, Jill taught science in the state school system, including at Ashcroft High School in Green Valley, an area with lots of newly introduced public housing and complex economic and social issues.

“It was quite an experience teaching there and seeing what real deprivation was,” she says. “But also seeing the wonderful spirit in the school. It was interesting for me to see that you didn’t have to be achievement-oriented all the time. I think it awakened something in me.”

Also fuelling Jill’s love for social justice was her association with the Campion Society, an organisation that promoted Catholic social action. “We studied the documents of the Second Vatican Council as a lay group and found them to be very strong on social justice and ecumenical activity,” she says. 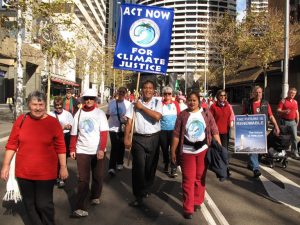 It was in the Campion Society that she met her husband, Michael. It was also where her awareness of the situation of Aboriginal Australians grew. “We weren’t really very aware of Aboriginal issues,” Jill says. “But, gradually, we became more aware of the history and we started to meet people.

“I remember we had a home Mass in our backyard one day and along came Mum Shirl with Gordon Briscoe and other Aboriginal leaders of that time. We spent the day with them and they shared their stories and we got to know Mum Shirl well over the years.

“That was a transforming experience. She was very inspiring and we became involved in Aboriginal issues, including racism awareness, and working for justice.”

Later, Jill was also a founding member of Action for World Development (AWD), an ecumenical body established by the Catholic bishops and the Australian Council of Churches.

“That’s where I learnt what social justice really meant,” she says. “I  learnt the difference between charity and justice and found that a lot of things we were doing for charity were, in fact, fundamental questions of justice.”

During the years when Jill took a break from teaching to raise four children, she became more heavily involved with AWD, which included people from the Baptist, Uniting, Anglican and Catholic churches.

“I developed a great love of working ecumenically,” she says.

“AWD was trying to look at the causes of problems rather than the symptoms. It was engrossing and I never went back to science teaching.”

It was with AWD that Jill also became involved with sustainable development and issues surrounding food, agriculture and, in particular, equitable access to food and the support needed for small farmers in the developing world. 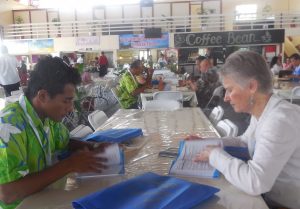 “Fair Trade became one of our interests and it was out of that movement that the Tradewinds fair trade labels for tea and coffee came into being,” she says.

“AWD also took a big interest in nuclear disarmament. It was a busy time. My kids will tell you that they were dragged along in prams to demonstrations and information stalls. They were part of it all.”

Putting her commitment to sustainable development into practice, Jill took up permaculture, teaching it for many years and writing a book about it.

“I felt the earth itself was suffering and there didn’t seem to be any link between the eco-justice movement and the development movement,” she says. “It was really just putting into practice what AWD had been doing anyway.”

In 2004, Jill began working for the Edmund Rice Centre (ERC) and it was here that she began her work for the Pacific. That year, the World Council of Churches signed the Otin Tai Declaration on climate change, calling on its member churches to work towards addressing climate change issues in their own organisations; calling on all countries to sign the Kyoto Protocol, committing to climate action; and calling on business to address climate issues and set targets to reduce emissions.

Through the ERC’s work in this area, Jill visited the Pacific island nation of Kiribati several times. This low-lying atoll nation is at risk of disappearing due to rising sea levels caused by climate change.

“I promised them that the first major action of the newly formed Pacific Calling Partnership would be to take their messages of deep concern for the future of their country to Canberra,” Jill says.

Since then, PCP members have advocated politically, attended major UN climate conferences, and made sure the voice of the Pacific is heard on the world stage. 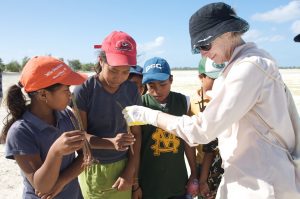 In 2014, recognising the work being done on the ecological front by a broad range of religious congregations, the PCP established the Inter-Congregational Voice on Climate Change.

“That’s been a very powerful group as well,” Jill says. “It’s been wonderful to watch the Religious growing in experience and stature in the eco-justice advocacy space, writing numerous letters to MPs, submissions to parliament and issuing the recent publications, Rising Tides Raising Voices and Sisters see their homelands threatened.

“Their voice is crucial because they are on the ground in the Pacific countries, walking with the people there.”

Jill, who is the author or co-author of two books, says that having decided to retire from her formal duties at the ERC, she looks back with gratitude on the way her life has unfolded.

“I’ve made so many good friends through this work and I’ve been lucky in that the formation in Gospel reflection that I was taught in the AWD has been a wonderful foundation in linking spiritual development to action throughout my life,” she says.

“And amongst all that, I’ve had great support in all that I’ve done from my husband, Michael, and my children. I’ve taken a lot more risks and had more adventures than I could have dreamed of because of their support.”

She says that while there is still much to be done on the eco-justice front, things have come a long way.

“When the ERC first started taking on the issue of the Pacific and climate change, it was pretty much the only association addressing these issues. Now, a lot more organisations are taking on and supporting the Pacific and their voice is being heard and really listened to around the world, which is fantastic.” 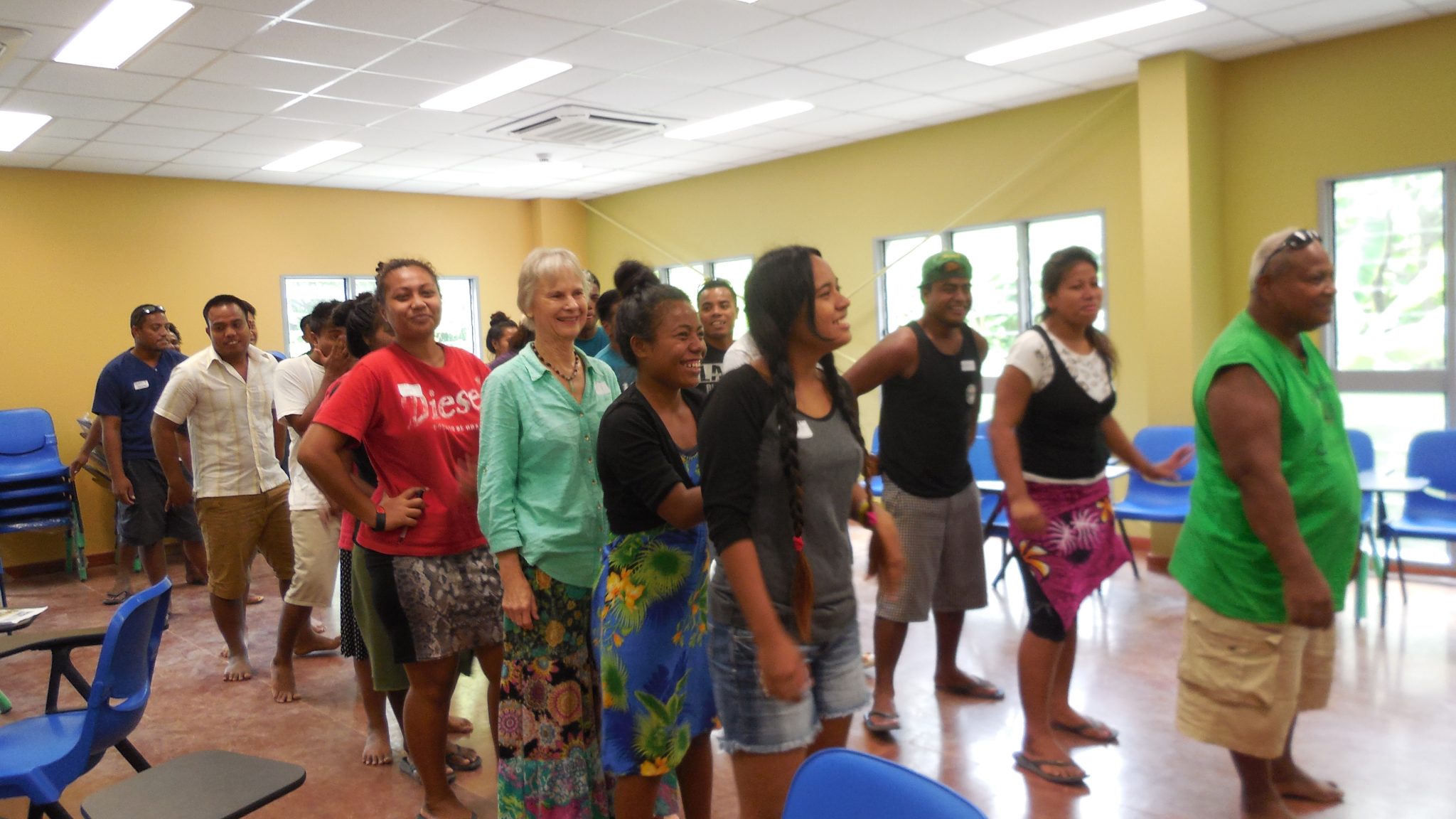 Overflowing life – all creation is a mirror of God