When being neighbour is opening our doors and hearts to strangers

Rosemary Kariuki is on a mission to empower migrant women, enticing them from a culture of silos, exposing them to new ideas, experiences and the wider community, writes Dan McAloon.

Rosemary is a proud African woman who arrived in Australia as a refugee in 1999 after fleeing the tribal violence that erupted during an election campaign in her homeland Kenya. Seeking asylum was a brave and life-changing act. Fleeing violence meant jumping into the unknown, separating herself from everything she had known and loved, not knowing what the future might hold.

When Rosemary received the Australia Day 2021 Local Hero Award in recognition of her years of work with migrant women in Western Sydney there was a resounding wave of applause. The lives of hundreds of migrant women have been improved because of Rosemary’s intervention. Many who had once been isolated by language and fear added their heartfelt testimonies to Rosemary’s role as mentor and friend in the Rosemary’s Way documentary. 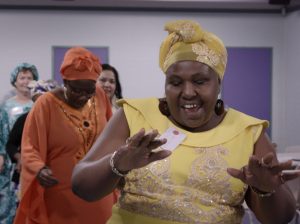 But behind these accolades is Rosemary’s own story as a woman of faith and conviction struggling to find her place in her adopted country.

For the first two years of her life in Sydney, she says her abiding emotion was “overwhelming loneliness”. On the city’s bustling streets, her sunny smile and “hello” was answered only with the indifferent stares of passers-by. “I felt the loneliness of one who is not seen, who is not recognised as being a human being.”

Living the life of an asylum seeker, unsure if she would win approval for a visa or be deported, Rosemary could not reconcile the coldness of the people she encountered, which ran counter to the inclusive family she had grown up in. “My parents were my role models. They gave me courage, pride, and kindness. My dad, Livingston Kariuki, was a farmer. He grew crops so we always had food on our table, and he would never turn away a needy child.”

Cousins, aunties and uncles who came to visit or came for assistance from my Dad often stayed, she explains. “Ours was a household of many children. My mother, Hannah, and my stepmother, Mary, gave me the gift of kindness for the 16 children that comprised our family.” Responsibilities in the household were shared among all members of the family. As a five-year-old Rosemary was already caring for younger children, and by age 10 she was cooking family meals. “We did not want for anything.” she beams. 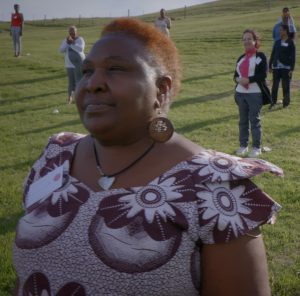 During those lonely years in Sydney, this wellspring of generosity was the source Rosemary drew upon, accompanied by prayers that God might grant her the grace to pass through this most difficult time in her life. “I lived in a block of flats with 15 families, and no one there spoke to me,” she says. But one Christmas her indomitable spirit pushed her to be bold. “I slipped a Christmas card with the number of my flat on it under the doors of all the flats. And in that moment, something changed. People knocked and thanked me and introduced themselves.”

Retelling this story from the podium at the Australia Day Awards, Rosemary explained: “When we open our doors to our neighbours it is moving. It takes courage to open our hearts to strangers. Be open and not scared of any perceived differences because as humans we have more similarities than differences.”

Rosemary is a big believer in the goodness in humanity. “Little gestures hold great rewards. If you say ‘hello’ to that person sitting next to you on the train, you may not know it, but you give that person purpose.”

It was while working as a volunteer at the Little Sisters of the Poor Mount St Joseph’s Home in Randwick that Rosemary found her true voice among the aged and frail residents. “It was a joy to me to see that I made a difference to the women, many of them dying and alone. They became like family to me. I had purpose!”

And as her confidence grew, she began to ask, ‘Where are the African women like me?’” She contacted the African Community Council in Western Sydney and attended her first meeting, only to find that her voluble personality made such an impression on everyone that she was elected to the committee. 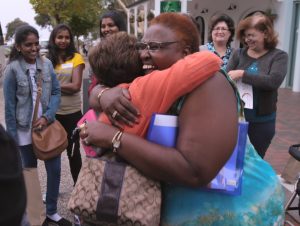 Today Rosemary is the multicultural community liaison officer for the Parramatta Police, a job where she helps migrant women who face domestic violence, language barriers and financial distress to access services and support.

“Sydney’s African community is comprised of so many diverse peoples, Kenyans are only a few,” she remarks, “But isolation and disadvantage is common among the women. They aren’t used to going out alone, have no transport, and speak little or no English.”

Over the years Rosemary has devised many ways to assist women leave their homes and meet other women in similar circumstances. She helped start the African Women’s Dinner Dance, now in its 15th year and regularly attended by hundreds of women. She also runs a cultural exchange program that introduces refugees and migrants to local families.

Her joy in helping to empower other women is apparent: “Women who were alone found friends, they found training and jobs. They went from having no English to talking like typewriters!” she declares.

Behind Rosemary’s public works is a woman of indomitable faith. A parishioner at Mary MacKillop Parish Oran Park, she was received into the Catholic faith as a young girl. “I was not raised in the Christian way. But when my cousin’s wife, Veronica, came to stay with my family, I would accompany her to Mass. It is where I first heard Christ’s teachings on love and forgiveness.” At age 12 she chose to be baptised. “When the priest asked, ‘give me your name’ I had chosen Susan but Rosemary is the name that came out of my mouth.” 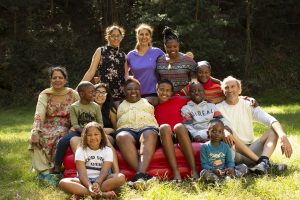 Later, while attending a Catholic secretarial college, she asked the Sister why religious studies was a subject in the curriculum. “I never forget her answer: ‘Look at everybody as Jesus – God is in that person. Whatever you are doing, you are doing to God because God made you in his image – if you hit that man with a stone, you are doing it to God.’

“I was 19 years old. At that time, it didn’t mean much – I had my whole life ahead of me. It is only as I’ve grown older it’s made sense to me, and I have used it in my life. More and more I see God everywhere, in everyone.

“In my work with the African community I am called a spokesperson, but we are many diversified peoples, Kenyans number only a few. But because I am seen as a leader I am asked to speak to the whole migrant experience. When I see young couples preparing for marriage, I tell them to be committed to the relationship. You do not fight with your brothers and sisters, so take each other as your best friend.”

As she drives between her various appointments around Sydney, Rosemary finds solace in reciting the rosary, praying for friends and family. “Every day I say the Mystery of the Resurrection – where the angel tells the women: ‘Don’t fear! I know you seek Jesus who was crucified. He is not here. He is risen, as he said.’

“Today, my home is open to friends and family. I feel God has given me this house for his people and I am only the caretaker. Someone will come over and I have some white polenta (ugali in Swahili) and stew cooking. One will offer to set the table: “Six for dinner, Rosemary?” And thinking of the stranger who might arrive I say: “No, you’d better set it for eight.”

Rosemary’s Way is available on SBS On Demand until November 1, 2021.