Fly me to the Moon

My journey to the Moon began many moons ago – many, many moons! I remember Frank Sinatra crooning this tune and I flew to the Moon with him, writes Good Samaritan Sister Mary McDonald.

As newly professed Sisters of the Good Samaritan of the Order of St Benedict, we began our teacher training at St Scholastica’s College, Glebe Point, in inner Sydney. The Principal, Sister Clare Slattery, invited us to choose a topic of interest for independent study. She advised us to plan carefully as we would take it throughout the year.

Another Sister and I chose astronomy. Our proposal was given approval, along with permission to use an internal ladder-like staircase that gave us access to the parapet at the back roof of the convent, Toxteth House. With no telescope, some library books on astronomy, we began our exploration of the night sky. For me it has remained a lifelong interest for “The heavens declare the glory of God, and the sky proclaims God’s handiwork.” (Ps 19:1)

In May this year, millions of people throughout the world gazed up to the sky to view the super blood Moon orbit close to the earth. Throughout the ages, the Moon has been intertwined in human thought, imagery and history, regulating cultural activities and religious ceremonies. 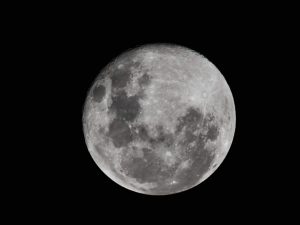 Some people will remember the televised images of the 1969 landing on the Moon and the first person, Neil Armstrong, taking a moon walk. In preparation for that event I went to the parish priest of St James Parish Coorparoo in Brisbane, Fr Tom Hunt, an Irish Augustinian, and asked him if I could hire the biggest television available. “And whay would you be wantn’ that Sister?” In response to my explanation he replied, “Sure Sister, you’ll be havin’ the biggest and best.” So the children had live streaming all day as they streamed and out of the hall! Years later at some reunions, people have recalled that wonderful experience.

Since then, many successful expeditions have provided images of moon scapes. Yet much is still unknown about the co-origins of Earth and the Moon and its vital sustaining component of life. We have only to think of the ebb and flow of the tides.

Exploratory crafts continue to be sent on specific scientific missions. This information has caused wealthy nations and corporations to develop technologies to make it possible to live on, mine and further explore the Moon’s eco system. These explorative missions report that the Moon’s landscape includes mountains and craters, rocks and boulders, layers of rocky material, dust, mantle, core, minerals, gases, water and ice. The lunar reflectors left by the Apollo probes have enabled precise measurement of the Earth–Moon distance since 1969.

Space agencies and private corporations are continuing their explorations and planning to extract lunar resources for profit. This is legitimated by the belief that the Moon is a dead world toward which we have no moral obligation.

This approach ignores the International space treaties such as the early Outer Space Treaty of 1967. It states that the Moon is part of the universe and is not subject to territorial claims:

The Moon and other celestial bodies shall be used exclusively for peaceful purposes;

Space travel beyond scientific purposes is another area that is being explored. On July 11 this year, Sir Richard Branson accompanied by two pilots and three passengers successfully reached the edge of space in the sky over New Mexico. Sir Richard described the flight as a test of the space tourism experience he expects to begin selling to customers from next year.

On July 20, Amazon founder Jeff Bezos recently soared past the 100 kilometre Kármán Line, the internationally accepted boundary of space, during an 11-minute flight. He was accompanied by his brother Mark, and an 18-year-old student, Oliver Daemen. The fourth passenger was Ms Wally Funk, aged 82, who trained to be an astronaut in the 1960s but was overlooked for a space flight because she was a woman. On touchdown she exclaimed, “It was great, I loved it, I can hardly wait to go again.”

Another billionaire, Elon Musk, is also investing millions of dollars to send people to the Moon and on to Mars. Musk, founder of SpaceX, wants to send humans further into space this decade but acknowledges there are weighty risks involved.

While the space science rhetoric is to maintain the ecological integrity of the Moon and limit what is sent to or remains on the Moon, the reality is that humans have already left or deposited more than 187,400 kilograms of material on the Moon. 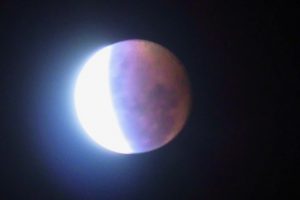 A small group of space-thinkers and lawyers have released a Declaration on the Rights of the Moon (February 2021) which states the Moon has a meaningful existence of its own, independent of humans. The declaration takes a “rights of nature” social and legal approach which argues that nature has inherent rights to exist and flourish, and is not just an object to be used by humans.

The Declaration states that the Moon has the right to:

The writers of the document hope that it will raise awareness, and people who care about the Moon will talk publicly about how to protect it.

The partial eclipse of the Moon in the third week of November this year will provide another opportunity to observe a wonder of the night sky. So perhaps it will be the time to take another moon walk, look up, see the heavens anew and join in praising “God, sun and moon; praise God, all you shining stars.” (Ps 148:3).

Good Samaritan Sister Mary McDonald has had a long involvement in and commitment to education, the environment and social justice issues. She holds degrees in arts, education, environmental education and theology. Mary lives in Brisbane where among other things, she gardens, plays Mahjong the Chinese way and tutors at Lourdes Hill College.