The inspirational true story of immigration attorney Judy Wood and her fight to change American asylum law is brought to the screen in Saint Judy, as reviewed by Dan McAloon.

Nearly 40 years of tenacity as an advocate for asylum seekers earned Judy Wood the honorific ‘Saint Judy’ from the multitude of grateful women and men who believe her dogged diligence in cases involving deportation saved their lives.

But the Saint Judy in the title of this biographical film based on the life of California-based attorney-at-law Judy Wood is far in the future when we meet the 30-something single working mum and her eight-year-old son Alex arriving in Los Angeles in the 1980s to take up her first job as an immigration lawyer.

We immediately know Judy is a fish out of water from the quizzical looks she gets in the Latino neighbourhood she crawls through at the wheel of a car that has seen better days, towing a rented trailer packed with all her worldly possessions. 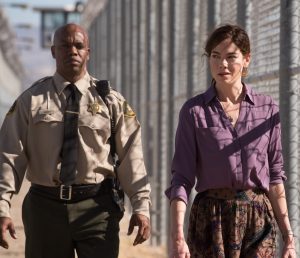 It’s a case of starting over for this former public defender as played by Michelle Monaghan. Judy must navigate her way through the career shift from the New York criminal justice code to the unfamiliar protocols of the US immigration system, while simultaneously finding a place to live and settling Alex into his new school surroundings.

Just why Judy has uprooted her life for the cause of asylum seekers is revealed in flashback to a vision she saw of hands reaching out of a jail cell and her name being called to help. The hands and voices were of political prisoners held in El Salvador jails during that country’s vicious civil war.

While they languish in pitiful conditions, tens of thousands of their fellow countrymen and women have fled persecution to seek refuge in America. These exiles-in-waiting are the people Judy Wood wants to help by being the best lawyer she possibly can be.

But watching Judy being buried by the files piling up on her desk is her boss Ray Hernandez, played by Alfred Molina. Ray imparts the wisdom of the world-weary veteran when he advises Judy that the way to manage her heavy caseload is to deliver timely outcomes  – even if it means accepting a deal that results in a deportation order back to the very authoritarian regime they have escaped. 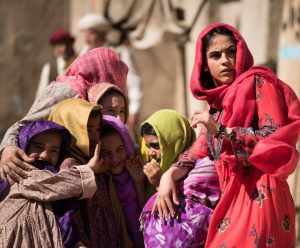 Judy’s inability to time-manage her cases to fit the nine-to-five day quickly becomes the reason she is fired. Undeterred, she opens her own shopfront legal practice and is soon embraced by the immigrant community as a lawyer prepared to go the extra mile for her clients.

Unlike the criminal justice code, Judy discovers that immigration law demands the claimant for asylum offers documentary evidence of persecution to substantiate their claim. Without documents, everything can rest on a full and frank testimony given under oath before a judge.

But Judy’s asylum seekers are deeply traumatised people haunted by past brutalities, challenged by language and held by strong cultural norms that are not understood in the US. Though their best defence is to tell their own survivor’s story in all its harrowing detail, for many it is a task they simply cannot do. Under cross-examination, therefore, they may come across as evasive, unconvincing, contradictory, and untruthful.

The case of Afghani woman Asefa Ashwari, played by Leem Lubany, brings all these complications into sharp focus in what becomes a landmark immigration case. Imprisoned by the Taliban for “crimes against God” because she founded a village school to teach girls to read and write, Ashwari’s unspoken shame is the sexual assault she endured at the hands of her callous jailers.

When she finally describes her rape in court the judge is incredulous at the testimony, “Why did you keep lying?” she asks pointedly. “Because my brothers would have killed me,” Ashwari replies quietly. Powerful though the testimony is the judge does not find in her favour, explaining, “The law does not recognise women as a protected class – it’s not enough to just be a woman. I must rule against you.” 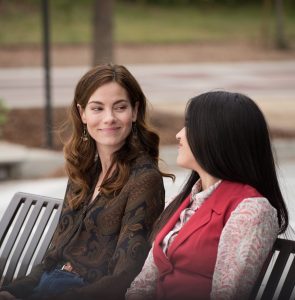 It will take another hearing in an appeals court before this adverse ruling is overturned and Asafa Ashwari’s case sets a new legal precedent in US immigration law that recognises persecution for political activism by one woman on behalf of other women constitutes grounds for granting asylum.

Suddenly Judy Wood’s relentless toil to open the eyes of the judges of the 9th Circuit Court to pass its unanimous ruling in Asafa Ashwari’s favor does indeed seem miraculous in nature and a case for her ‘canonisation’. In Saint Judy we see one woman’s story that is emblematic of the tireless work of social justice advocates everywhere, in every age.

Saint Judy will be available to watch on Movies Change People’s Online Premieres platform from November 18, 2020 and for rent or purchase on all other platforms from December 16, 2020.

Saint Judy is available to rent on WONDER.

‘Share the Joy, Give a Toy’ Christmas appeal for Bacolod
Print Article The Good Oil Index