Jane’s new role with Good Samaritan Education ‘like a homecoming’

Good Samaritan Education has appointed a new Executive Director who is not only familiar with the Good Sams but was educated by them. Dr Jane Comensoli spoke to Debra Vermeer.

In October this year, Jane took up the position as head of Good Samaritan Education (GSE), which is the ecclesial community established by the Sisters of the Good Samaritan in 2011 to carry their charism forward in Catholic education.

She said her appointment felt somewhat like a homecoming, given that she began her association with education as a student at St Mary Star of the Sea College, Wollongong, a Good Samaritan school for girls.

“I had some amazing teachers, but what really stands out to me from my time there is the strong sense the Sisters instilled in us that you could do whatever you wanted to in life – there were no barriers,” Jane said. 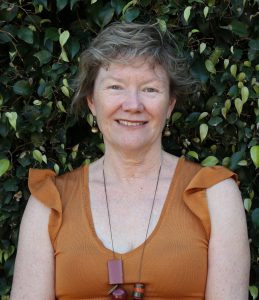 Jane was born and raised in Wollongong, and after leaving school she gained a Science/Law degree at the University of New South Wales with plans of becoming a forensic scientist. However, a stint of work experience at the state government laboratories convinced her she was more interested in working with people than corpses.

“I think I’d watched too many crime movies,” she laughed.

After leaving university, Jane initially worked as a patent attorney  before becoming an Industrial Officer and then Organisational Development Consultant with BHP/BlueScope Steel.

After some years she took a position as Head of Employee Services with the Catholic Education Office in Wollongong. Following that, Jane worked as the Director of Human Resources for Sydney Catholic Schools, later becoming deputy to the Executive Director. From 2014-19 she completed a Research Doctorate on knowledge management for teachers.

She was working as Head of People and Culture at Caritas Australia when the opportunity at GSE came up.

“I hadn’t been at Caritas for long and I wasn’t looking for a new job, but when I saw the ad for this position it just niggled at me,” Jane said.

‘I love the Good Sams and I think the education I had with them is what has driven me to a large extent.’

“The Sisters have always embodied an earthy commitment to living in the real world, but with a sense of what’s possible for the future.

“On top of that, I have a love of education as a sector. It’s so critical for the future of our kids. I see this position as a chance to go back and effectively make a difference in education.”

Jane, who is married with three grown children, acknowledges she comes to the role at a challenging time, as schools continue to deal with the impacts of the COVID-19 pandemic and grapple with funding issues.

“I have such an admiration for principals and teachers who have managed throughout this pandemic and responded so creatively, and at the heart of that response always, is the students.

“There have been some very interesting learnings during this COVID-19 experience, about the strengths of face-to-face teaching as opposed to self-directed learning, but also lessons about adaptability and using technology well, and kids having more autonomy over their time.”

With 2021 being the 10th anniversary of the creation of GSE, Jane said the year ahead will be an opportunity for celebration, but also reflection and looking forward.

“It will be a time of celebrating the great achievements over that period, but also a time to reflect on where we are now and what is needed to ensure that Good Samaritan Education is still strong and vibrant in 20 years’ time,” she said.

At the heart of that is a commitment to ensuring the legacy and charism of the Sisters of the Good Samaritan lives on in GSE schools.

“There is a huge obligation on GSE to maintain that legacy and that heart of service,” Jane said. “GSE schools are not independent schools, but part of a broad ministry.

“There is a whole sense of community, and for me it’s about working within that community, being explicit about that, while also balancing that with the strong governance which is required of us at a government level. But certainly the mission is absolutely integrated into everything we do.

“Obviously, I’m not starting from scratch but building on an excellent foundation put in place over the past 10 years of Good Samaritan Education, and the strong legacy of the Sisters.”

We are called to be ‘Neighbours without Borders’