Good Samaritan Sister Clare Condon has been awarded an honorary doctorate by Australian Catholic University in recognition of her contribution to social justice and to the Catholic Church in Australia, writes Debra Vermeer.

Clare received the honorary degree of Doctor of the University on May 26 at ACU’s graduation ceremony in Sydney. Clare said she accepted the honour on behalf of all women religious in Australia who have done so much in the areas of education, health and social welfare over the past 200 years. 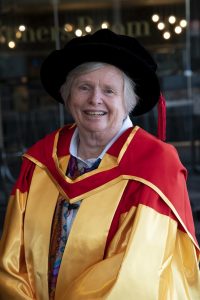 “I think women religious in this country do an enormous amount of compassionate support work on the ground with people in advocacy for those most in need, and particularly their work with asylum seekers and refugees,” she said.

“So, I accept this honour with an awareness of honouring what they have done since the arrival of the first Sisters of Charity in 1838, and what religious women continue to do today.”

Congregational Leader Sister Patty Fawkner SGS said Clare was a worthy recipient. “Clare is never one to seek the limelight and I know that she accepts this honorary doctorate with real humility,” Patty said.

“Clare is truly an ecclesial woman – she has worked for the Church in many capacities for decades – in Catholic Education and in archdiocesan and congregational governance roles.

“Like Pope Francis she has ‘the smell of the sheep’ about her, especially in her commitment to justice for women and Australia’s First Nations peoples.

“I and all my Good Samaritan Sisters are immensely proud of her.”

“Sister Clare Condon has been committed to living out the values of the Gospel, particularly to walk the way of the Good Samaritan, for 50 wonderful years,” he said.

“Her dedication to supporting her Sisters as they serve people on the margins is inspiring, and reflects ACU’s own commitment to the dignity of the human person and the common good.”

The honorary doctorate comes in Clare’s Golden Jubilee year, marking 50 years since she professed her vows as a Sister of the Good Samaritan.

Born and raised in Wollongong, Clare entered the Sisters of the Good Samaritan in 1969 at the age of 20 and was professed in 1972. She said her teachers, all Good Samaritan Sisters, inspired her own vocation.

“They were young women at that stage, and they had a real zest for life,” she said.

“The mystery of their life fascinated me, and I felt called to it; I didn’t want to go, but in the end, I thought, ‘I’ve got to go and test this, to get it out of my system to see whether it’s right’.

“I’m still here 53 years later and I know it was the right decision.”

Clare’s journey in the Good Samaritans includes being Congregational Leader from 2005-2017. 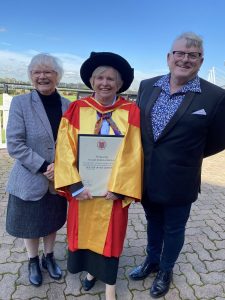 In her 12 years in leadership, she supported the Sisters’ humanitarian work in Australia, the Pacific and South-East Asia.

She helped establish an inter-congregational Aboriginal and Torres Strait Islander Committee; a ministry to assist refugees and asylum seekers; an entity overseeing more than 150 hectares of ecologically sensitive land saved for restoration and preservation at the Wivenhoe site in Camden; and through the Good Samaritan Foundation, offered education, food and pastoral support to thousands of the poorest and most marginalised people in the Philippines and Kiribati.

Clare said all the humanitarian work was driven by “the Gospel imperative”, especially the message in the parable of the Good Samaritan.

“It calls for a real shift in values to reach out to the other who might not understand or appreciate you, but to acknowledge our common humanity.

“I think it’s really important and I think that parable is what’s sustained me.”

Clare said while she was “a bit embarrassed” to receive the ACU honour “when so many others have done so much”, it was an honour to receive it in her Golden Jubilee year.

“I joined the Good Sams just after the Second Vatican Council and there was a real sense of excitement and change in the air, particularly in religious life,” she said.

“It felt like the windows had been opened and really, for 50 years, I’ve lived totally with change.”

Starting out teaching primary school and then appointed principal of a small country school, Clare later moved into ministering in a boarding school in the 1980s, during which time structures were modernised “to ensure the students had a life other than just school”.

From 2000 she moved into a leadership position in the Archdiocese of Adelaide’s Pastoral Team set up by Archbishop Leonard Faulkner.

Later she served as President of Catholic Religious Australia (CRA) and Co-Chair of the National Committee for Professional Standards, a joint committee of CRA and the Australian Catholic Bishops.

“In some ways I felt I was a better administrator than teacher,” she said.

The Sisters also continued to develop their theology of mission and consolidated their presence and ministries in Kiribati and the Philippines.

Clare said her sense of social justice and mission goes back to her family and her time in the Young Christian Workers movement, with its maxim of ‘See, Judge and Act’.

“In the 1980s I was part of the feminist movement when women in the Church were trying to claim their place,” she said.

Throughout her life, education has been a constant for Clare. She has tertiary qualifications in accountancy, sociology, education, and social policy.

“I’ve always believed that education is a great social mover,” she said.

“And I found my studies really important in the area of social justice, in looking to empower those who are on the margins or forgotten.”

Clare said her life as a Sister of the Good Samaritan had afforded her enormous opportunities.

“It’s been a real privilege, the opportunities the Congregation has given me,” she said.

“I’ve had some wonderful experiences, and I’ve been blessed with the opportunities given to me by my formation, and the honour from ACU is also a recognition of that.” 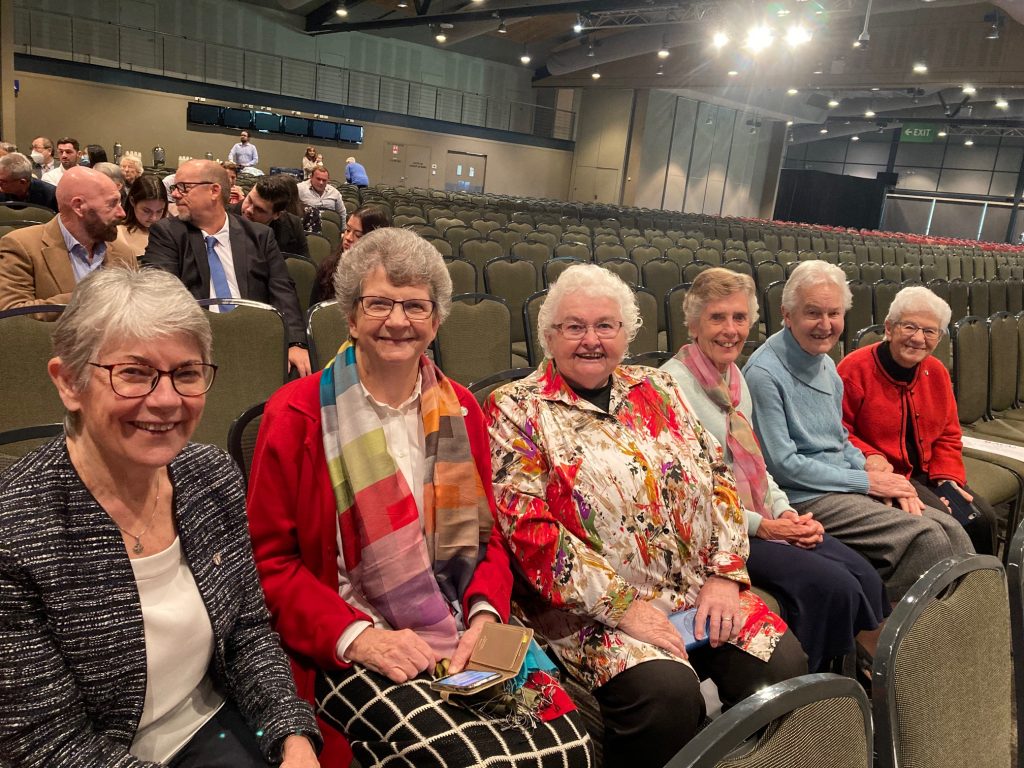 All the Good Samaritan Sisters are immensely proud of Sr Clare Condon SGS.