Earlier this year, Good Samaritan Education welcomed Carmel Shaw as the new Director of Formation and Mission Integration. Carmel spoke to Gabrielle Sinclair for this edition of The Good Oil.

Carmel is a familiar face to some in the Good Samaritan Education (GSE) community. She taught for six years at St Scholastica’s College at Glebe from 2004-2010 before setting out on other paths.

Growing up in a large Catholic family in Newcastle and Sydney, Carmel has always had a strong sense of justice and service that led her to volunteering with Vinnies, feeding people who were homeless. 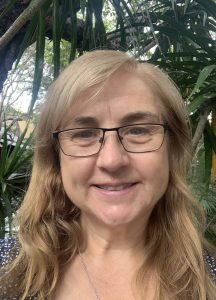 Through this initial outreach experience she met Sister Maria Sullivan RSJ, a Perthville Josephite, and the Josephite Community Aid community. Maria had established a community of young adults and religious living together in community and serving the poor and vulnerable in Sydney’s inner west.

Living in community was a profound experience of the centrality of prayer and contemplation as a basis for justice and peace. It was also where Carmel first encountered liberation theology, which was to become a fundamental part of her understanding of what it means to be fully human.

“It was the first time I understood what it truly meant to be a person of faith,” Carmel said. “Whatever plans I thought I had for my future disappeared in those years. I studied theology and education and became a teacher, and then a mission leader, first in Catholic education then in Catholic healthcare. I met my husband while living in community, and we have been blessed with three children.”

Drawn back into the Good Samaritan Benedictine charism, Carmel remembers that teaching at St Scholastica’s College “was easily the most energising and inspiring school I’ve worked at”.

“Its fidelity to the Sisters and the strong sense that the school existed not only for the sake of the students while they were at the school but also for the common good was tangible,” she said.

Good Samaritan Education is the ecclesial community established in 2011 to oversee the ethos, mission, and stewardship of the 10 Good Samaritan Colleges in Australia.

With other ministry contexts now in her toolkit, seeing the GSE advertisement for the role in mission, Carmel was curious to know more about the evolution of GSE and how it is navigating this emerging world of lay leadership of Church ministries.

Knowing that the Good Sams’ history is characterised by the capacity to be attentive to the needs of the world and the courage to step into unknown territory in response, the invitation to return felt like a good fit and a nudge from the Holy Spirit.

“Over the years, I have had the privilege of working with several religious congregations and have been witness to their fidelity to Christ, sometimes in the face of extraordinary pressures (both from within the Church and from the wider community).

“They have always had a strong sense of what it means to remain standing at the foot of the cross, even when all seems lost or impossible. I have witnessed how they pursue inclusivity and uphold the dignity of all people, regardless of their actions or circumstances, even when the hierarchical Church or the community has condemned them. I love being a part of their story and continuing to keep that spirit alive into the future.”

As Carmel embarks on this new part of her journey, she is empowered by the appetite GSE has for learning and growing; observing, and heartened by, GSE’s sense of shared humility around what we know and don’t know – that we don’t have all the answers. She sees GSE’s gift is its willingness to listen, to make space for the Spirit to move among us and draw out the potential of the community.

Last year GSE celebrated its first decade and as it launches into the next 10 years of its evolution Carmel has a sense that the time is right to allow the collective prophetic imagination to build on the foundations, to enrich the whole community.

“I see my role as helping to build support structures that unify our many gifts, give momentum to our growth, and transform our imagination into reality,” she said. “We follow in the footsteps of courageous women, and I hope to continue to engender some of their boldness into our work.”

Unpacking collaborative ways of being Church and building community are right at the heart of Carmel’s passion for formation. “I love the dialogical nature of formation. Formation is really a sharing of stories, an unearthing and enlivening of the gifts of each member of the community in order to strengthen our connections to each other, not for ourselves but for the common good.

“I am looking forward to getting to know everyone who has accepted the invitation to continue to build the community of God here and now. I am excited about being part of the evolution of Church for a very different (and unknown) future.”

Gabrielle Sinclair has worked in ministry roles for more than 20 years, with parish, dioceses, and nationally with the ACBC’s Office for Youth. Gabrielle has a Bachelor of Arts in Television Production, a Master of Arts in Theology and is currently undertaking a Graduate Certificate in Monastic Studies. Gabrielle is the Associate Director of Communications and Mission Engagement at Good Samaritan Education.