Patricia Purcell retires after a long association with the Good Sams

Good Samaritan Foundation Board member Patricia Purcell retired recently. She spoke to Debra Vermeer about what has been a long and happy association with the Sisters of the Good Samaritan.

After six years on the Foundation’s Board, Pat hopes her retirement will pave the way for younger members to step up and offer their online marketing and promotions expertise in support of the Good Sams’ ministries.

Her association with the Sisters of the Good Samaritan goes back many more years, having been on the boards of both St Scholastica’s College, Glebe (from 1988) and Rosebank College, Five Dock (2007-2014), which are Good Samaritan Education schools.

Pat was also the Chair of the Sisters’ Sesquicentenary Committee, helping to steer the successful celebrations for the occasion in 2007.

“I’ll be 75 later this year and it was time to step down,” she said. “But also, it then provides an opportunity for someone younger, with more online expertise, to come in and assist the Good Samaritan Foundation.

“Governance is very important for boards but marketing is also extremely important, especially today when so much of this work is done online.” 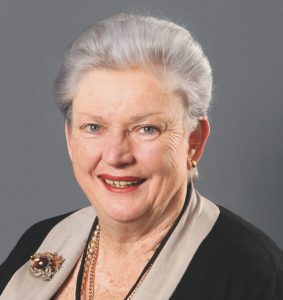 Pat said her involvement with the Good Sams began when Sr Clare Condon SGS asked her to be a part of the St Scholastica’s Board.

“I’ve had a long association with the Sisters and I’ve always enjoyed working with them,” Pat said.

“I’ve always found the Good Samaritans to be a very positive religious order. It’s so refreshing to find them so motivated and positive in their mission. And they always respected what I did, which was very important.

“That’s why I’ve stayed so long – because of them and their ministries.”

Since 1857, the Good Sams have responded to the call of the needy, especially disadvantaged women and children, offering refuge, education and hope. The Foundation was established in 1999 to provide ongoing finances and resources to the work established by Sisters.

Pat said it had been gratifying to be part of a Foundation which raises funds for so many important ministries with communities in the Philippines, Kiribati and across Australia, especially Indigenous communities.

“One of the things I’ve particularly loved is being a part of raising funds for the Good Samaritan Foundation scholarship scheme,” she said.

“The applications that come in each year from families for this kind of help would break your heart. It’s wonderful to be able to help these families who are doing it tough, to have an education for their children in Good Samaritan schools.”

Pat said the Good Samaritan Foundation Board was a pleasure to be a part of. “I always found that the Board, the people on it, were there for positive reasons, just wanting to do the best for Good Samaritan ministries, and that overall attitude made for fairly smooth sailing,” she said. “Each of the Board members made their contribution, and I made my contribution.

“Of all the boards I’ve been on, this one has been a highlight because there’s always something new happening in terms of the ministries the Foundation is supporting.”

Together with a successful career in marketing, specialising in the tourism industry, Pat has taken on various volunteer roles over the years for which she was recognised in 2019 with an Order of Australia Medal for Service to the Community.

“It probably started when I helped a friend who was fundraising for a Catholic hospital in Papua New Guinea and I’ve been on one committee or another ever since,” she said.

Apart from her volunteer work with the Good Samaritan Foundation, Pat was Marketing and Advertisement Officer for the NSW Nurses and Midwives Association from 1988-2015 and has more recently been volunteer Media Officer for the Sydney Southern Region of the State Emergency Service (2003-2010). She has been a volunteer at St Joseph’s Parish, Newtown and chair of the parish’s Sesquicentenary Committee, and she volunteers in her new local community with the Drummoyne Community Centre.

CEO of The Good Samaritan Foundation, Catherine Cresswell said Pat’s retirement from the Board was a significant moment in the life of the Foundation.

“Since I started in this role in 2015, Pat’s been an absolute rock,” Catherine said. “She’s so willing and so full of energy, positivity and can-do attitude. Not only has her expertise been invaluable, but she’s grown to be a good friend.”

Catherine said Pat had not only been a member of the Board but had also volunteered extensively in the Foundation’s office.

Her work included establishing the Foundation raffle, arranging donations, prizes, selling tickets and stepping in whenever and wherever she was needed.

“She’s been so generous with her time. The Foundation is extremely grateful,” Catherine said.

Donations over $2 to The Good Samaritan Foundation are tax deductible in Australia. To make a donation, click here.

Pandemic has led to an increase in human rights abuses