When a picture paints a thousand words that reveal the truth

In the quest for truth and justice, the media holds up a mirror that reveals what is hidden from our eyes but often done in our name, writes Patty Fawkner.

Minamata? I’d never heard of it, and then twice within 24 hours. A Good Samaritan Sister in Japan emailed me saying that she was hoping to visit the “Minamata exposure”.  The next day I read a review of a film called Minamata.

The serendipity (often the modus operandi of the Holy Spirit!) of email and review moved me to go and see the film starring Johnny Depp.

This is no Pirates of the Caribbean role. Depp plays the part of the famous American World War II photojournalist, W Eugene (Gene) Smith, renowned for introducing the photographic essay in Life magazine after the war.

In 1971, Japanese American translator, Aileen Mioko, had invited Gene Smith to visit Minamata, a fishing village on the island of Kyushu in southern Japan. Aileen, who eventually became Smith’s wife, wanted to recruit him for the campaign for justice for families devastated by Minamata disease, a neurological illness caused by extreme mercury poisoning.

For several decades, a chemical factory owned by Chisso Corporation had been discharging heavy metals into local waterways around Minamata, poisoning seafood, the staple diet of the villagers. Babies and young children were most severely impacted by crippling deformities of face, hands and feet, wasted muscles, and impaired vision, hearing and speech.

Chisso had denied all responsibility and insisted that there was no connection between the disease and the company’s mercury waste.

Despite local activists producing damning evidence to the contrary, the company refused to pay financial compensation. The film claims Chisso’s sole concern was profit and a fat return to shareholders. Dollars trumped compassion and justice.

Gene and Aileen lived in Minamata for two years, winning the trust of the villagers who eventually allowed them to photograph the gnarled bodies of their loved ones.

Armed only with his Minolta camera, Gene took on the corporate behemoth. He and Aileen produced a photo essay for Life and co-authored a subsequent book.

The image that most affected the world was Tomako Uemura in Her Bath, an image that is at once heart-breaking and shocking, while being suffused with tenderness and love. It is the Pietà of the 20th Century.

Whereas protest and advocacy couldn’t budge Chisso, the film portrays how this photograph did. International public opinion eventually forced the company to compensate victims and their families.

Tomako Uemura in Her Bath helped raise global awareness of industrial pollution of marine habitats elsewhere. “Photography is a small voice, at best,” Smith famously said, “but sometimes – just sometimes – one photograph, or a group of them, can lure our senses into awareness …”

Minamata is hardly an isolated case, the end credits of the movie list other global chemical catastrophes, including Chernobyl, Bhopal, and the Exon Valdez oil spill. What these environmental and human tragedies have in common is how corporate power endeavours to cover up and avoid all responsibility.

It occurs to me how photojournalism can “out” the deniers and the shirkers of responsibility, in the service of justice.

More recently, we are grateful to Darnella Frazier, the young woman who filmed the murder of George Floyd on her phone. Frazier received a Pulitzer Prize special citation “for courageously recording the murder of George Floyd, a video that spurred protests against police brutality, around the world, highlighting the crucial role of citizens in journalists’ quest for truth and justice.”

Film makers can do the same. Two fine films based on true events come to mind: Erin Brockovich about an environmental activist’s lawsuit against a company responsible for contaminating drinking water, and The Insider in which Russell Crowe plays the role of a whistleblower in the tobacco industry.

Such films and images hold a mirror up to our society to reveal what is hidden from our eyes, but so often done in our name. 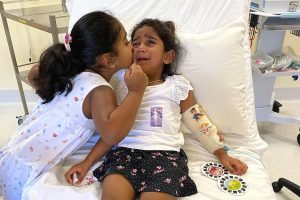 Who can forget the image of the two “Biloela sisters”, a sick and distressed, Tharnicaa Murugappan (then aged three) being comforted by her sister, Kopica? Tharnicaa was subsequently diagnosed with pneumonia and sepsis and flown to a Perth hospital for treatment. Another photo taken two years earlier showed Tharnicaa’s rotten teeth, presumably caused by vitamin deficiency in detention.

The photo of the two sisters did “lure our senses into awareness”. It stirred a modicum of begrudging compassion in the hearts of politicians who allowed the Murugappan family to be reunited in Perth and issued with a three-month bridging visa. It also tugged on the heart strings of many of us and stirred our conscience, forcing us to consider if the end of border security could ever justify the means of cruelty to children.

Much of Australia’s asylum policy is brutal and inhumane and we voting citizens collude with the government that enforces it. At a time when the plight of the most needy in our society is deliberately hidden from view to avoid public scrutiny, where punitive anti-whistleblowing laws have been introduced, when press freedom is vulnerable (witness the police raids on media organisations), more than ever we need our own “Minamata exposure”. Let us salute our investigative journalists, photojournalists and film-makers while claiming our own crucial role, “as citizens in journalists’ quest for truth and justice.”