A small group of neighbours in a Balmain public housing estate have banded together to build on the legacy left by two Sisters of the Good Samaritan by bringing back to life an abandoned common room, which will once again be the focus of community-strengthening activities.

Sisters Mary Constable and Marie McMahon, both now deceased, first developed the common room for social activities back in the early 1990s, but as they grew older and less able to host gatherings, people almost forgot the room was there.

Today it has a new lease of life, thanks to a group of residents who have worked hard to revive the common room, through obtaining a New South Wales Government grant for its refurbishment. 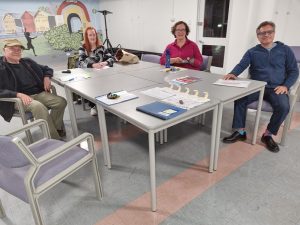 Group coordinator Heather Pearce said she came across the common room when searching for a place for a local community choir to practice.

“I was searching for a rehearsal space in 2018 when someone mentioned the common room. I said, ‘What common room?’ I went and had a look, and it was run-down, but we were happy to do a clean-up. It had fabulous acoustics,” Heather said.

“When I asked who had the key, everyone told me, ‘You have to go and see the nuns.’ So that’s how I first met Mary and Marie and how we began our journey to restore the common room.”

Marie moved into the Balmain public housing estate in 1988 with two other Sisters and Mary arrived in 1991 as coordinator. The Sisters of the Good Samaritan had applied for them to live there after Mary had played a key role in having the public housing built in the area in the face of opposition from some Balmain residents.

In an interview with The Good Oil some years before they died, Mary and Marie said they saw their ministry in the neighbourhood as “a ministry of presence”.

“We’re just here being neighbour to everyone,” Mary said. Living simply, in their small unit they conducted much of their ministry at their dining room table, over a pot of tea and some cake or biscuits.

There was a steady stream of visitors to their door, including migrants seeking help with forms or bureaucracy, single mothers needing clothes or food for their children, or help with shopping for those who couldn’t get out. 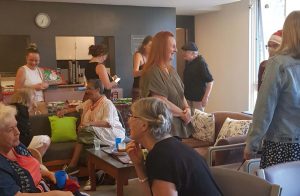 They used the common room in the complex to hold activities for their neighbours, including bingo, film nights, Melbourne Cup luncheons and tai chi.

Heather, who said she too has a strong sense of fighting injustice, believed the common room could once again be a place of gathering for the local community.

“How can you just let that legacy go?” she said. “The day that Mary and Marie were leaving their unit to go to a nursing home, I went down there and Marie put the keys in my hand. She held my hand and said, ‘You look after it now Heather.’”

Heather and her small executive applied for and received one of the NSW Government’s Community Building Partnership grants to refurbish the common room and bring it back to life. It has been painted and plumbing and electrical work has been undertaken. They had air-conditioning installed so that the room can be a place for residents to go for a rest if they don’t have heating or cooling in their unit.

“Yoga will be the first thing we’ll hold there and anyone can come along,” Heather said. “We’re looking at establishing a garden club where we can swap cuttings and seeds. We’ve also got a wonderful wall mural painted by members of our group supported by artist Kelly Wallwork and featuring Marie and Mary. 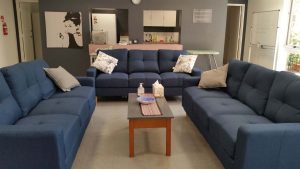 “One of the first things we’ll do is put a survey around and ask the tenants themselves what is the priority in terms of uses for the common room. We want to make sure that we focus this nice space on the tenants. These people deserve a lovely space like this.”

The Sisters of the Good Samaritan have honoured Mary and Marie’s legacy by supporting the residents in fitting out their revamped common room.

Sister Catherine McCahill, a member of the Sisters of the Good Samaritan Council, said that when Sisters Mary and Marie passed away, some of the funding they had received for their ministry passed to the Congregation.

“We wanted that money to be used for the people,” Catherine said.

“And thanks to a small group of the local residents working really hard together, the common room has now been transformed and is once again a great place for the community to gather. It’s a beautiful story of ordinary people doing good for their community and we were very happy to support it.”