Lourdes Hill College Year 12 graduate Sophie Leong has been awarded the Future Leaders Future Justice Award in recognition of her commitment to service and outreach over the past year.

Future Justice is an initiative of Future Leaders. The award recognises Year 12 students who have shown leadership and initiative on intergenerational equity – future justice, which is concerned with what those living today leave behind for future generations. Sophie was one of seven young people to receive the award in 2021.

Sophie, who was Lourdes Hill College’s Service Captain for 2021 and Co-Captain of the school’s Outreach Program in 2020, said the award came as both a great surprise and a great honour.

“I didn’t realise I had been nominated, so I was really surprised to find out that I had been,” she said.

“It was very unexpected because I really didn’t think that I’d made that big a difference with the things we’d done through the year. But it was nice that others noticed what we were doing and nominated me for the award.” 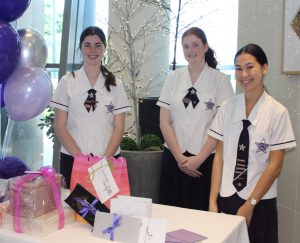 Those initiatives included selling pancakes at the tuckshop for Shrove Tuesday, with all funds raised going to charity. This was followed by ‘Red Cups for Rosies’, where Sophie and others served hot chocolate in red cups to support Rosies’ Friends on the Street food vans and kitchens in Brisbane.

We also ran a range of smaller things at lunch times to raise funds for charity.

“A huge part of the Service position is to build awareness and motivate the school community to support people in need. I definitely think that the level of seriousness about helping people is increasing. A lot more people are ready to step up.

“The whole thing of being neighbour and helping others is a big part of being at a Good Samaritan school.”

In her previous role as Co-Captain of the College’s Outreach Program, Sophie was involved in a range of activities including visiting a local aged care centre and singing for the residents; making sandwiches for homeless people; and supporting local community organisations such as L’Arche, Vinnies, Orange Sky Laundry and others. 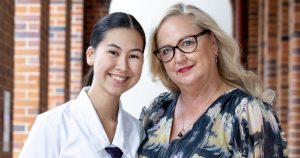 Sophie, who was born in Brisbane but has lived most of her life in Vanuatu, where her father is from, said her upbringing had helped her understand the value of community.

“It was a big eye-opener to move from Brisbane to Vanuatu and see all the different experiences there,” she said.

“The local people value life differently in terms of what makes them happy. It’s more about community than individuality.

“I went to a very culturally diverse primary school and it taught me to really value that diversity.”

During her time at Lourdes Hill and living in Brisbane during school terms, Sophie remembered her community in Vanuatu, making stationery packs that she would then deliver to the children in various villages when she returned home in the holidays.

“It’s beautiful to see the children’s smiles when you give them one of the packs. They’re so happy to get them,” she said.

Lourdes Hill College Principal Robyn Anderson said the school was delighted that over the past three years, students at the College have been recognised nationally for the Future Leaders Future Justice Award.

“Sophie is a deserving winner,” she said. “She has demonstrated exceptional leadership skills and made valuable contributions to the school and the wider community through a range of College service groups and community activities.

Sophie’s mother, Maria, is a past pupil of Lourdes Hill and hoped to send her daughter to the school.

“I wanted Sophie to attend Lourdes Hill because of its excellent education and for her to experience the Good Samaritan values of giving and helping those in need, but the final decision rested with Sophie,” she said. “As soon as Sophie stepped into Lourdes Hill, she knew that this was the school for her.”

Robyn said the College was very proud of its students and their service to the school and the wider community.