Saying thank you ‘with a song in my heart’

When Her Excellency Mrs Linda Hurley became Vice-Patron of the Good Samaritan Foundation, she penned a song about the work of the Good Sams and their partners, writes Debra Vermeer.

It’s not the first song Mrs Hurley has written. In fact, promoting a love for singing is one of the things she loves to do in her public role supporting her husband, the Governor-General of Australia, General David Hurley.

“I want the whole world to sing!” she says. “I believe that singing is a gift we give each other.”

So much does Mrs Hurley love singing that it’s now quite common for vice-regal visits to community events to end in a rousing sing-along.

“We’ll often sing something everyone knows, like the chorus of You are my Sunshine,” she says. “We sing it three times. The first time is because everyone is terrified, then the second time, more people join in and the third time everyone’s having a great time.

“It’s my way of saying thank you to these groups for all they do for our community.”

The song she penned for her role with the Good Samaritan Foundation, and performs in a Facebook video, is also a way of saying thank you. The lyrics of the first verse set the tone:

The Good Samaritan Sisters do a splendid job.

They’ve been helping others with guidance from above.

The Good Sams have been helping, always with compassion.

“I like writing songs,” she says. “People might say ‘how ridiculous’, but I just want to spread that joy.” 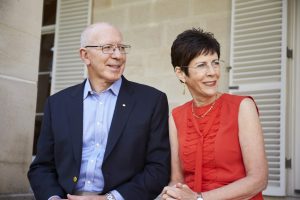 Mrs Hurley fulfilled a musical dream when she staged a musical production at Government House in Sydney when General Hurley was Governor of New South Wales (2014-2019).

“I wasn’t allowed to coerce the staff, but I invited them to take part,” she says. “I taught each group a song and then it was up to them to do with the song what they wanted. “It was very amateur but everyone who did it loved it. It was a bonding experience and I was thrilled.”

Mrs Hurley’s love of singing goes back to her youth and she has been a member of choirs throughout her life.

Born in Sydney, she grew up in Hurstville and attended Kingsgrove High School, realising from an early age that she wanted to be a teacher.

She attended the Riverina College of Advanced Education in Wagga Wagga, seeing country living as a bit of an adventure for a city girl, and after receiving her diploma, began her teaching career at Tempe Primary School in Sydney.

It was during that first year of teaching that she met David Hurley, the young Army officer who she went on to marry, and with whom she now shares three adult children and a grandchild.

Army postings around Australia and overseas followed for several decades and, combined with a young family, it was some years before Mrs Hurley resumed her teaching career, having obtained a Bachelor of Education at Canberra University.

Despite the constant relocation, she continued teaching until General Hurley was appointed Chief of the Defence Force in 2011, at which point a friend suggested she undertake a pastoral care worker course.

“I did the course and I worked at Canberra Hospital and then in a hospice in Canberra as a pastoral carer,” she says.

“I would have never imagined I would do that. But as things turned out, it was good for me to do that training. There is pastoral care everywhere. Being trained in pastoral care teaches you to listen and listening is a very important skill for the work we are doing now where we meet so many people from different walks of life.”

One thing that has sustained Mrs Hurley throughout her life is her Christian faith.

She grew up in the Presbyterian Church and, together with General Hurley, remains an active member in Canberra today.

“I’ve always been a Christian,” she says. “I couldn’t live without faith. It’s in everything we do. It’s very special. I’m not sure what people do when they can’t pray for guidance and help and thanksgiving as part of life.”

Settling back into the Canberra community since General Hurley’s appointment as Governor-General in July 2019, Mrs Hurley has been a regular member of the St Andrew’s Presbyterian Church Choir. She is also a member and was the first Patron of Solid Rock, a Christian ministry to women in Defence.

She says she has long had an admiration for the Good Sams.

“We met some Good Sams when we were in Sydney,” she says. “They’re just amazing women – so upbeat, happy and helpful and they get jobs done with a smile on their faces. So welcoming, kind and compassionate.

“The work they do is overwhelming. How could you not love them? It’s a real honour to be their patron.”

Since taking on the patron role, Mrs Hurley has already reached out to help the Good Sams in their ministry.

“I rang Sr Liz (Wiemers SGS) in Santa Teresa (Central Australia) and had two very long conversations with her. She taught me so much about life at Santa Teresa,” she says.

“Sr Liz told me they were totally locked down during the pandemic and they needed blankets, but they couldn’t get out to get them this year.

“We asked the Government House staff to donate some blankets. One of our staff members’ daughter was going around their neighbourhood asking for blankets, and others bought some. It was great.

“Sr Liz told me that one lady in Santa Teresa had only a few more days to live and the joy on her face when they gave her one of the blankets was beautiful.”

Like so many people, General and Mrs Hurley have had to make changes to the way they perform their duties since the arrival of the COVID-19 pandemic.

“Yes, it’s made a big difference to how we do things,” she says. “We’ve had to cancel a lot of the visits we had planned. It’s quite frustrating because we want to get out and about and meet people.

“But instead, we’ve had lots and lots of phone and video calls. We’ve started doing a lot of video messages to support people in what they’re doing and holding zoom meetings. I’ve done book-readings with students.

“I’ve also taken the opportunity to do some research into the house we’re living in here at Government House. There’s a lot to learn about this house.”

Mrs Hurley says she is looking forward to being Vice-Patron of the Good Samaritan Foundation.

“We like to be involved with our patronages,” she says. “We like to get out and see what the organisations are doing and encourage and support them and do whatever we can to help, not just a letterhead.

“Getting out and supporting these organisations is a big part of our life and our role. And saying thank you to people in the community for the wonderful work they are doing. We want to share this house with people and invite them to come here and feel special and we want to say thank you.”