Coragulac in south-western Victoria is a small town serving the local dairy farming district, but for a tiny place, the students at St Brendan’s Catholic School are getting plenty of runs on the board when it comes to hands-on environmental sustainability.

The Sisters of the Good Samaritan have a long association with St Brendan’s, going back to 1919 when the first Good Sams arrived to take over the running of the school from the Sisters of Mercy. The Sisters withdrew from Coragulac in 1989 but maintain a close relationship with the school and the community, which is situated in Gulidjan Country. 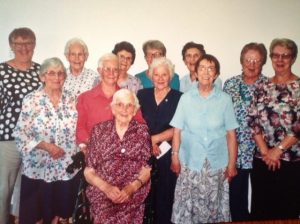 Former St Brendan’s student Sr Margaret Carmody SGS said that during a recent visit to the school with Sr Gerri Boylan SGS to celebrate the 200th anniversary of Catholic education in Australia, she could not have been more impressed by what she saw.

“It’s extraordinary for this little school of about 50 pupils,” she said.

“There were chooks running around the yard, they’ve got beehives that the kids look after and gardens they care for. It’s real hands-on stuff.

St Brendan’s Principal, Leanne Eastman, said the school was still in the early days of deepening its engagement with ecological sustainability, but the students had really embraced it. 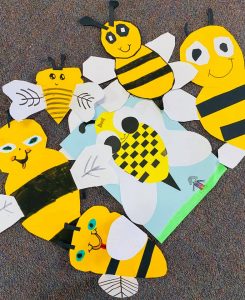 “We appointed one of our teachers, Alice Armistead, to be Sustainability Leader this year to give this area extra focus,” she said.

“So each Wednesday, when we do our specialist lessons, we now include Sustainability and Outdoor Learning.

“Each year level is working on a different project. We pulled down our old vegie garden and the students helped build a new one. They’ve worked on mulching fruit trees and building a fence. They’ve been very hands-on in what they’ve been doing.”

In Term One this year, Alice initiated a partnership with the Conservation and Land Management department at The Gordon Institute of TAFE in Geelong.

As part of their Certificate IV studies in Conservation and Land Management, the TAFE students are required to create an environmental community project, and they set to work in collaboration with the St Brendan’s community.

Landcare donated trees and shrubs and the TAFE students planted native trees around the bike track. 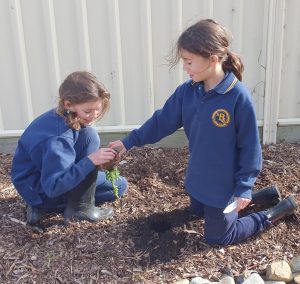 “We’re hoping to make this a bush track that is interactive, increases bird life and also hosts imaginative play like cubby-building, and hide and seek,” Leanne said.

The second activity was bush-tucker planting in the school’s indigenous garden.

“The children learnt about each species of bush tucker, how it can be used in cooking and medicine and they were also able to taste and smell it, so it’s a wonderful sensory garden experience,” Leanne said.

“The students also created bug hotels. The children had prepared baby formula tins by painting them up as bugs with wings and legs that hang in trees. An old tin chest was turned onto its side to make a bigger bug hotel on the ground.

“The TAFE students then filled these with bark, pine cones, wood and sticks. It’s hoped the bug hotels will encourage the bugs to stick around in the garden and enrich the soil health.”

When it comes to caring for the bee hives, the pupils have learnt how to wear protective clothing, smoke the hives and harvest the honey – as well as take a pot of honey home to eat. 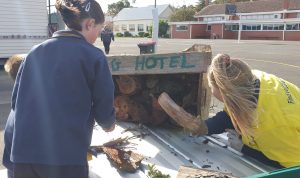 “It’s evolving,” Leanne said. “We’re always looking for new things. Outdoor learning is so good for the well-being of the students. And out here in the country, it’s real and authentic.”

The outdoor activity is also linked to lessons on Pope Francis’ ecological encyclical, Laudato Si’, which is part of the Religious Education program at St Brendan’s. “It’s about who we are as people and who we should become,” Leanne said. “If we don’t give kids a love for the environment, they won’t be able to protect it.”

Sr Margaret said it was a delight to see St Brendan’s still carrying on the Good Samaritan and Benedictine charism of caring for neighbour and for all creation.

“These kids are learning so much about the importance of natural creation. Their whole experience is surrounded by ecology and nature. We’re learning about it, but they’re living it.”