And still we pray and long for peace

As we approach Advent, preparing to celebrate the birth of Jesus, I am mindful of so many situations in which we long for peace, writes Good Samaritan Sister Catherine McCahill.

March 25, 2001 was a ‘quiet’ day in Bethlehem. On this the Feast of the Annunciation, nearing the end of a three-month sabbatical in Jerusalem, I had decided to spend the day at the site where Christians venerate the birth of Jesus.

It was the sixth month of the Second Intifada, the uprising of the Palestinian people against Israel. Political commentators speculate that the failure of the 2000 Camp David Summit to achieve a peace deal resulted in heightened tension, but the final trigger for this Intifada was the provocative visit of the Israeli Opposition Leader, Ariel Sharon, to the Temple Mount (site of the Al-Aqsa Mosque). Palestinian protesters were shot at with rubber bullets and subjected to tear gas.

Resident at Tantur College on the border between Jerusalem and the West Bank (Palestinian territory), I had witnessed first-hand daily skirmishes and, at night, seen the bullets flying like fireworks between Beit Jala, a Christian village in the West Bank, and the southern suburbs of Jerusalem.

As I wandered into Bethlehem that day and made my way to the Grotto of the Nativity, I reflected on the quiet of this town and its places of worship. Pilgrims and tourists were rare in those days of strife. I settled on to a stone bench, mindful of the countless women, men and children who had come to this place to pray and to recall the birth of Jesus. Since at least the 4th Century, the grotto had been known as the place where Jesus was born. 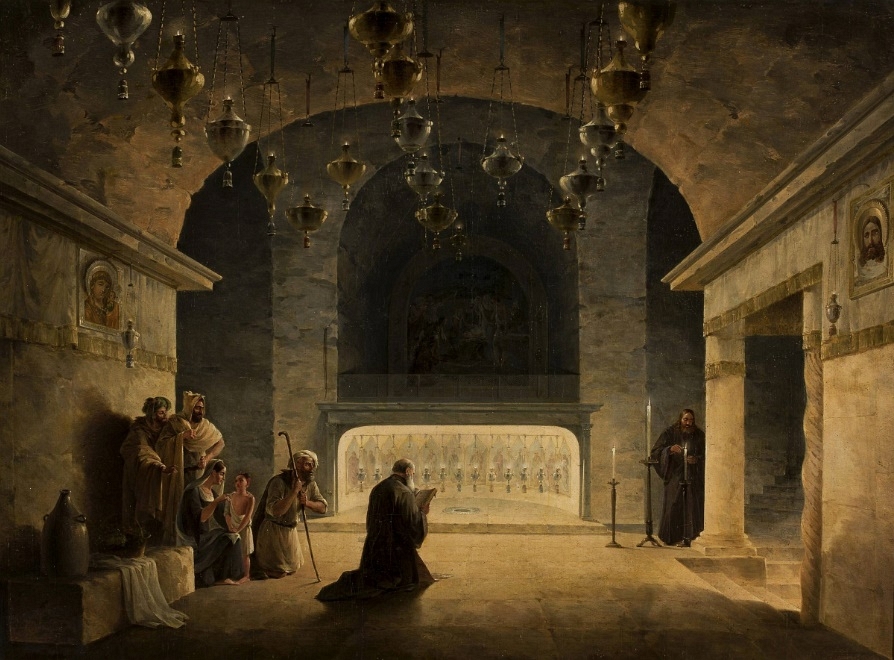 Whether this is the place or not, I am not sure. However, I do know and acknowledge: a place of pilgrimage becomes ‘holy’ from the prayers, the hopes and the longings of those who visit. Whether Jesus was born here, or some other place, is irrelevant. What matters to me is that God became human and lived among us in the flesh and humanity of that 1st Century Palestinian Jew called Jesus.

As I sat reflecting, a young woman and five children came to pray. From their acts of piety, I identified them as Orthodox Christians. I was particularly taken with the youngest child, an attractive boy aged about two or three. He mimicked the older children, repeatedly genuflecting and crossing himself in front of the 14-pointed star in the stone floor.

When they appeared to come to the end of their prayer, I greeted the woman. She told me that the youngest child was hers and the others were nieces and nephews. There was no school today due to the strife. She spoke of life in Beit Jala. She recounted the daily hardship, especially for children. Each night, just as their parents are tucking them into bed, the fighting starts and, on some nights, continues for hours. I felt tears welling as I contemplated life in that small village, a haven for those engaged in fighting the Israelis because of its proximity to the southern suburbs of Jerusalem.

In that place and in that encounter, I had a new experience of what it means to pray for peace, to plead for peace day after day, for years. That Intifada, which ‘officially’ ended in 2005, led to the deaths of approximately 3000 Palestinians, 1000 Israelis and 64 ‘foreigners’. And still, they pray for and long for peace.

As we come again to our time of Advent, preparing to celebrate the birth of Jesus, I recall this moment in my life. I am mindful of so many situations in which we long for peace: Ukraine, Afghanistan, Myanmar. I think also of those people who long for food and shelter in Somalia, Haiti, Zambia and Ethiopia, and those living in camps and on the fringes of society.

I remember those who are not safe: women, children and men in situations of domestic violence; citizens of repressive regimes; individuals and families caught in webs of crime and violence. I am concerned about people and places most affected by climate change. I grieve the loss of biodiversity and habitat.

I pledge my solidarity with Australia’s Indigenous people on the journey to reconciliation, waiting for justice and acknowledgement that they never ceded ownership of this land.

Over these weeks of Advent, we prepare to celebrate the coming of God among us. In our words and our practices, both in our Christian communities and wider society, the messages are ambivalent and sometimes confusing.

It is easy to become caught up in a flurry of activities: completion of the year’s strategic goals, end-of-year parties, gift giving, family gatherings and summer vacations. We vacillate between our longing for peace, for justice, for God’s ways, and the sentimentality of a baby in a crib.

Personally, I try to strip back all the tinsel and activity to the foundational message of the Gospel – the message to the shepherds in Luke’s Gospel: “This will be a sign for you: you will find a child wrapped in bands of cloth and lying in a manger.” Three times, Luke tells us that the child is “lying in a manger.” Because there was no place of hospitality for the parents of Jesus, his mother gives birth in the place reserved for animals and places her newborn in the animal’s feeding trough.

What is the sign and its meaning for us?

We could reflect on God becoming human and entering humbly into the simplest of settings, the poverty of place and circumstance, and that is true. To me, though, there is much more. This ‘sign’, like a picture turned upside down, jolts me and invites to look again, to see beyond that first day to the rest of Jesus’ human life.

For some commentators, such as Brendan Byrne SJ, the very mission of Jesus in Luke’s Gospel is to portray and invite all people into the “hospitality of God”. Jesus eats and drinks with everyone, especially “sinners”. His stories include banquets and meals. His actions and his teaching insist on restoring relationships between people with each other, and with God. In his dying moments, he promises the man crucified beside him a place in paradise on that very day.

The ‘sign’ reveals the meaning of the life, mission, death and resurrection of Jesus – God is the source of nourishment for all of humanity. In receiving Jesus, we enter into the hospitality of God who longs to sit down at table with us and nourish us.

So I begin this season of waiting. I know that I am being invited to know the hospitality of God, God’s longing for all of creation. I know also that I am being invited to share in the mission of Jesus, to be neighbour. While I wait and pray for peace and justice in our world, like the little Beit Jala family in Bethlehem, I can do my little bit to bring hope and justice to the world around me. I know too that the one who was laid in the manger will nourish me, and all of us, in our endeavours, our longing and our waiting.