Some of the delegates at the NATSICC Assembly in Townsville. Image: NATSICC/Sisters of the Good Samaritan.

Four members of the Good Samaritan community who attended the recent National Aboriginal and Torres Strait Islander Catholic Council Assembly in Townsville, say it was an enriching and humbling experience to be part of the gathering which explored the theme, ‘Holy Spirit in the Land’.

About 200 delegates from across Australia travelled to Townsville, the land of the Wulgurukaba and neighbouring Bindal People, for the first in-person NATSICC Assembly since the onset of the COVID-19 pandemic. The Assembly ran from September 19-23, 2022.

Throughout the week, speakers explored the Holy Spirit’s work in the lives of First Nations peoples and provided participants with the opportunity to share their stories, experiences and knowledge. 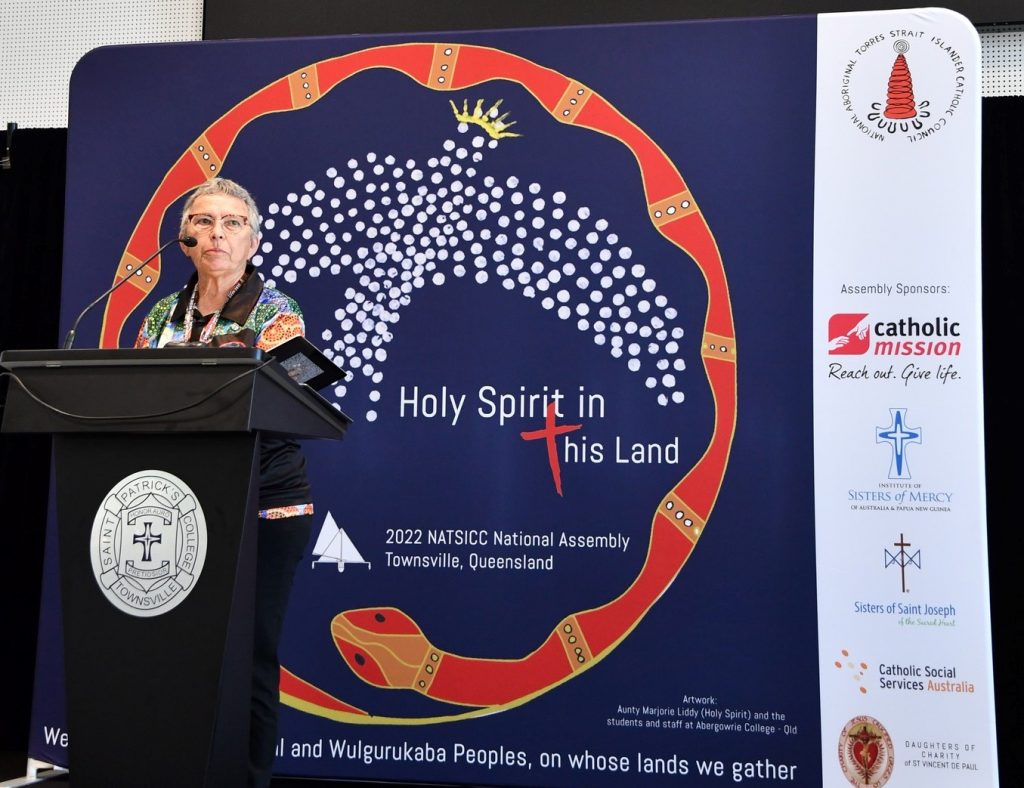 Among the presenters was Good Samaritan Sister Liz Wiemers, who explored the link between Aboriginal spirituality and Pope Francis’ encyclical Laudato Si’ – On care for our common home.

Liz, who is based in Brisbane but ministered for many years with the Arrernte people at Santa Teresa in Central Australia, said her presentation took the form of a conversation with Matt Brown of the Catholic Schools Office, Diocese of Lismore and Sabrina Ann Stevens from NATSICC and Caritas Australia.

“I spoke about how across the world’s Indigenous cultures, most see God present in Creation,” Liz said.

“Using a painting to start things off, we talked about how for Aboriginal people, everything is alive and full of God and because of this, the land is sacred. All things come from the Creator so all of Creation carries the Spirit of the Creator.

“From there, I drew a parallel with St Paul’s description of our bodies as being temples of the Holy Spirit, but also, how we’ve moved away from that understanding because of our attitudes of materialism and consumerism. We now have a disposable attitude towards all things.”

However, Liz said that science was now helping us to see God present in Creation once again.

“I made the connection with the James Webb Telescope and how, through the pictures it is sending back from space, we can see God’s creation, beyond our solar system and even beyond the universe,” she said.

“This is something that Aboriginal people have always believed – that God is present in all Creation, and of course, this is also the main message of Laudato Si’. I saw our presentation as affirming Aboriginal people in their spirituality.”

Liz said that after her years in Santa Teresa, she felt very comfortable at the NATSICC Assembly.

“I felt quite humbled really, to be a non-Aboriginal person presenting at the Assembly, but I did it with the blessing of the Arrernte people and I enjoyed being there. I felt so at home.” 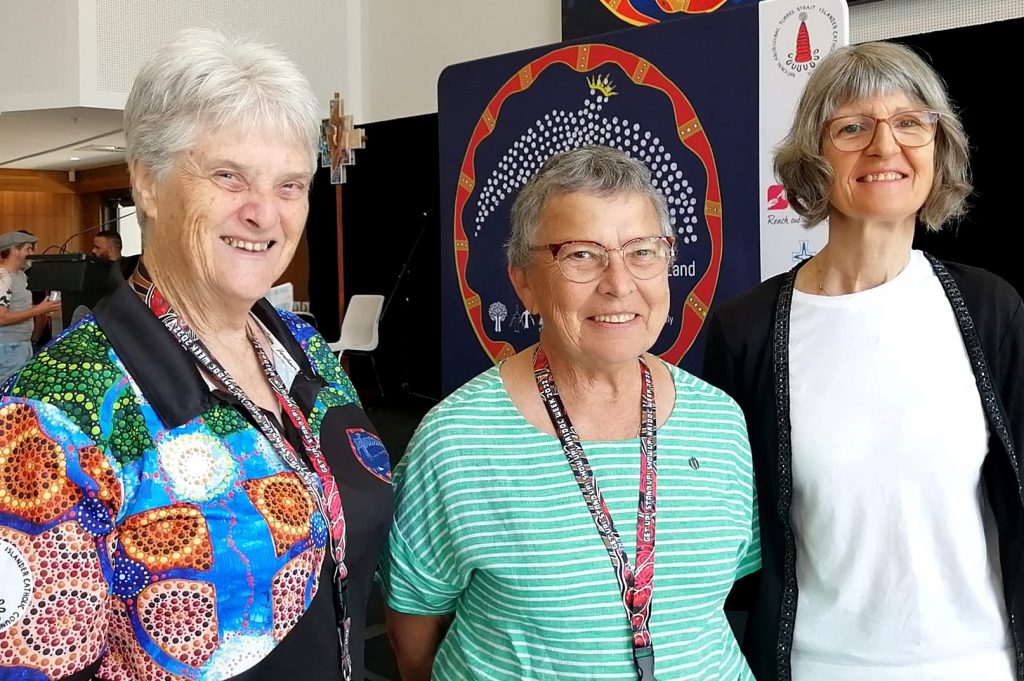 Judith Foster said her role at the Assembly was to support NATSICC in the preparation of the liturgies, including the Opening and Closing Masses.

“For many years I’ve had a passion for looking at how we enculturate the liturgy for our First Nations people,” she said. “What do things like a smoking ceremony mean? And the Acknowledgement of Country. How can we bring all this together?”

Judith said much preparation went into the liturgical aspects of the Assembly, with weekly planning meetings on Zoom.

A highlight was obtaining permission to use the Mass of the Land of the Holy Spirit, an Indigenous Mass setting that comes from the Kimberley in Western Australia.

“It’s like a chant Mass and the whole Mass picks up that tune,” she said. “It has wonderful responses and each prayer is very beautiful and rich.

“We had a wonderful team of musicians working under Sacred Heart Cathedral’s Director of Music, Jackie Crocker, as well as clap-sticks and a smoking ceremony. Everyone walked through the smoke, led by a didgeridoo player. It was a really vibrant celebration.”

“From a liturgical standpoint, it’s trying to work with and incorporate Indigenous culture while working with the Roman ritual and meld it somehow so that it’s not an add-on, but an integral part of it,” she said.

“And that, I think, is the challenge for the whole Church, and one that the Plenary Council has asked us to take up.”

Good Samaritan Oblate, Cathy Jones, is Pastoral Leader of the Diocese of Geraldton’s Inland Parish of Mt Magnet, Cue and Meekatharra. She attended the Assembly as a representative for the Diocese and was accompanied by Indigenous parishioner Cecilia Kelly.

“I found it really exciting, just seeing so many Aboriginal and Torres Strait Islander people, especially young people, both committed to the Catholic Church and to their belief in their identity as Aboriginal people,” Cathy said.

“It was lovely to listen to the speakers and to feel informed and enriched by what they had to say.”

Another highlight was a “beautiful cultural walk in Townsville” and learning about the history of Palm Island and the situation there today as a result of many different Indigenous peoples and language groups all living together. 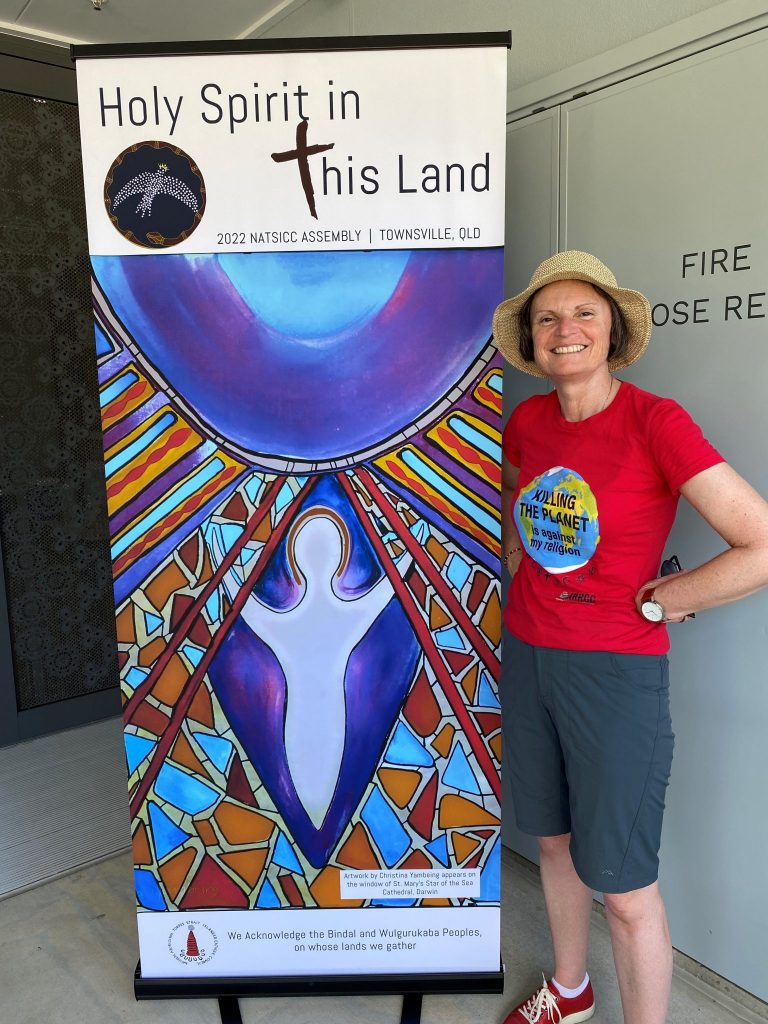 “The Townsville experience was again an enriching time,” she said.

“In my work at Catholic Education Diocese of Wollongong (CEDoW) I am able to collaborate closely with the Aboriginal and Torres Strait Islander Education Team and it was through that connection that I attended with other CEDoW colleagues.”

Beth said the highlight for her was the address by Dean Parkin, a Quandamooka man and Director of From the Heart, which unpacked the Uluru Statement from the Heart.

“Dean’s presentation provided much food for thought and challenge for this important issue for our country,” she said.

“My experience at NATSICC gave me a renewed sense of enthusiasm for the important work of reconciliation that we as Catholics all can engage in. I appreciated the opportunities for inculturation and connecting the Catholic faith story with Aboriginal spirituality.” 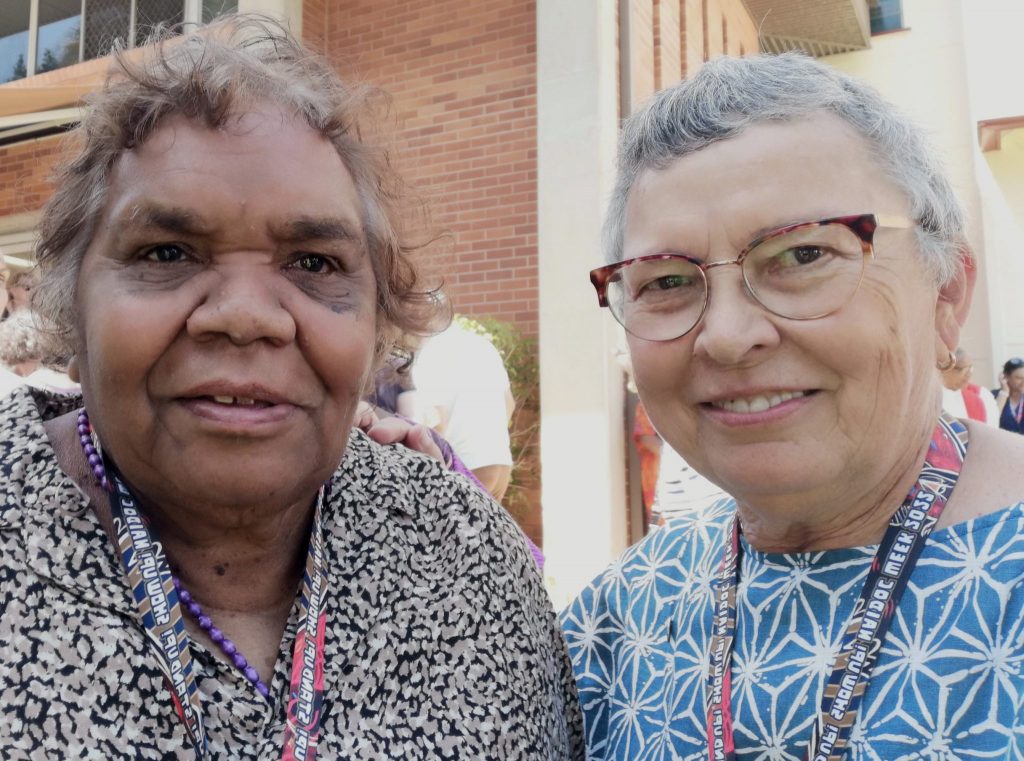