Festive season a celebration of faith and family

Sr Anne Dixon SGS said the Bacolod community was blessed to be supported by so many generous benefactors. Image: Catherine Cresswell.

The Good Samaritan Foundation brings together people and resources to support the works and initiatives of the Good Samaritan Sisters to assist the needy in communities across Australia and the Pacific.

We hope you enjoy this snapshot of how Christmas will be celebrated in some of the ministries supported by the Foundation. 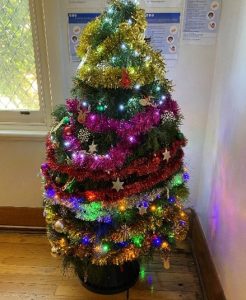 Decorating the tree is a highlight of the Christmas preparations. Image: Good Samaritan Inn.

The Inn’s Executive Director, Felicity Rorke, said Christmas will be a celebration of connection, empowerment, safety and healing. “Many of the women and families that have been staying at the service have been with us for many months, mostly due to the difficulty of finding affordable long-term housing,” she said.

“Some of them have created positive connections with each other and bonded over their shared experiences. The service has been very busy over the past 12 months and has rarely had a vacancy for more than a few days. The up-side of having a full house is that there are more people to share the offerings that have been donated to the service during the festive season.”

Donated items include food and balance bikes and a real Christmas tree from the Country Women’s Association. “The CWA will also deliver hampers for some of the families that have left the Inn but are still being supported,” Felicity said.

“All the women and families staying at the service will receive hampers. Rize Up Australia will once again deliver presents.

“One of our staff members will prepare a special meal. Although she is Muslim and doesn’t celebrate Christmas, she is looking forward to sharing the joy of the day with the women and children.” 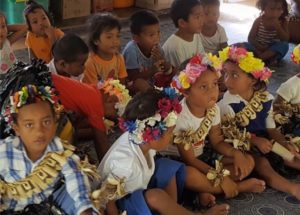 In the Pacific nation of Kiribati

Two communities of Good Samaritan Sisters are engaged in educational, pastoral and community development ministries in Kiribati, where Christmas is a celebration of faith, family and food.

Sister Katarina Kabiriera said each village has a part to play during the Christmas Mass, which includes singing and dancing. After Mass, there is a competition that includes traditional dancing and singing in groups, and a tally of the fundraising the villages have undertaken during the year.

“The competition is a way to bring all the Catholic people together to enjoy the most important event in their lives and their culture. The winning village received a flag, which they fly during the coming year,” Katarina said.

“My favourite part of the day is singing traditional songs so they are not lost, which helps to preserve our culture.

“The parents wrap a Christmas gift for each child and prepare a meal of pork, imported food and bwabwai, which is like taro.”

Sister Taabeia Ibouri said she was looking forward to spending Christmas Day with her family after being away from them for so long due to international border closures when she was visiting Australia at the start of the COVID-19 pandemic.

“There will be a singing competition, presents, and food. Christmas is always about food because it brings everyone together and shows love, unity and care. Eating pork and  bwabwai is rare for my family. Bwabwai has to be cultivated and takes time to grow so  it is only served on special occasions.” 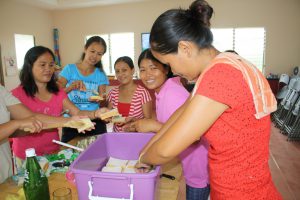 Helpers at the Outreach Centre. Image: Sisters of the Good Samaritan.

Good Samaritan Sisters have lived in the city of Bacolod on Negros Island in the Philippines for more than 25 years. They work alongside and in support of families living in the squatter settlements of Boulevard and Mambuloc and those whose home is on the street.

Sister Anne Dixon said Christmas in Bacolod was similar to Christmas in Australia in that traditions remain the same, year after year. “In Australia, I would be looking forward to a scrumptious roast dinner, followed by plum pudding with brandy sauce!

“Here, if families have the money, they will sit down to spaghetti, with fruit salad and condensed milk for dessert. If spaghetti is not affordable, they may opt for bread and peanut butter. Otherwise, they will eat the usual rice and fish.”

Anne said the community was blessed to be supported by so many generous benefactors in Australia. “An online toy drive run by the Outreach Centre and a Christmas Appeal run by the Good Samaritan Foundation have generated the funds to purchase more than 600 toys and many food products to pack in Christmas bags for more than 300 families,” Anne said.

“We will have Christmas gift giving, accompanied by dancing competitions and games in the lead-up to Christmas Day. It is always a joyful and exciting day. The delight on people’s faces makes the weeks of preparation worthwhile.”

The Sisters will celebrate Mass on Christmas Eve, followed by supper and the exchange of gifts. “On Christmas day, we will go for a leisurely drive in the countryside, which is a delight of sugar cane and rice fields, and huge mountains. The Filipino Sisters also fit in visits to their families,” Anne said. 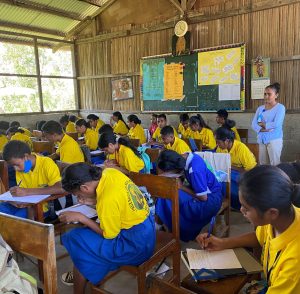 The Good Samaritan Foundation provides education scholarships for more than 120 children and young people in Timor Leste. Since it became a sovereign nation in 2002, the country continues to grapple with issues of poverty and child malnutrition and is now considered the poorest in Asia.

Father Hyoe Murayama SJ is the Principal of NOSSEF Catholic Secondary School of Railaco, where more than 60 students receive scholarships each year.

“During Advent, we hear Confessions before or after Mass when long lines of parishioners wait quietly to receive the Sacrament of Reconciliation. We need hope, but hope needs patience, willingness and Reconciliation,” Father Hyoe said.

“As Christmas approaches, each local community starts to build its big nativity house along the roadside. The people look happy when they decorate their cribs.”

A team of six priests will celebrate Christmas Mass in the parish of Railaco where there are 12 chapels.

A doctor from the UK visited the NOSSEF school recently to provide free medical services. “He said that in his country the main diseases are related to eating and drinking too much. He wants to help the Timorese because most of them suffer from malnutrition,” Father Hyoe said.

“In Railaco there is no Christmas dinner, no concert, no exchange of gifts. Instead, there is malnutrition, silence at the time of Confession, exchange of greetings and Reconciliation. May God bless us. May we praise him. We pray for you and ask for your prayers.”

What the world needs now is poetry