Support for Oceania delegates’ voices to be heard at COP27

At the recent COP27 United Nations Climate Conference, the voices of Pacific Islanders and Indigenous peoples were heard more loudly than ever before, writes Debra Vermeer. But while some important gains were made, developed nations still failed to deliver on crucial emissions reduction targets, say delegates and advocates.

Among those who travelled to Sharm El-Sheikh in Egypt for the November 6-18 global meeting were five Pacific Islander and two Torres Strait Islander delegates who were funded via the Pacific Calling Partnership (PCP) by a number of religious congregations, including the Sisters of the Good Samaritan.

The PCP, an initiative of the Edmund Rice Centre for Justice and Community Education, was founded in May 2006 in recognition of the negative impacts climate change was having on the peoples of Kiribati, Tuvalu and islands of the Torres Strait.

The PCP is committed to listening to what islanders are saying about imminent threats to their way of life and helping them promote their message in Australia and internationally.

PCP Coordinator, Corinne Fagueret, said the voice of the Pacific was loud and clear at this COP.

“It was wonderful to see the Pacific Islanders attending, speaking their voice and coming home empowered and feeling that they can make a difference and have real agency in a debate which has such enormous consequences for their lives,” she said.

“These voices are there now, telling of their own experiences, the impacts of climate change on their land and their people, and they are able to support each other.”

Corinne said developing countries around the world, including those in the Pacific, were pleased that after 30 years of advocacy, the COP27 meeting agreed to set up a ‘Loss and Damage’ fund to provide financial assistance to developing countries, in order to help them rebuild physical and social infrastructure devastated by extreme climate change-related weather.

However, no agreement was struck on how to finance the fund.

“It was wonderful to see the agreement for a Loss and Damage fund,” Corinne said. “It’s an outcome that has been long-fought for.

“However, there has been no facility established and no major commitment from industrialised countries to contribute to this fund.

“So, although there was a feeling of victory among Pacific Islander delegates asking for a Loss and Damage fund, nothing concrete has been achieved yet.”

Corinne said the COP27 meeting was also deeply disappointing on other fronts.

“The COP achieved very little in other areas, including in mitigation and reduction of greenhouse gas emissions, and we know that the higher the emissions, the higher the impact and suffering, so it’s very concerning.”

PCP Pacific Outreach Officer, Maria Tiimon Chi-Fang, who has attended several COP meetings, said she accompanied the PCP delegation to Egypt and was impressed by the impact they had.

“We had Oceania delegates from Kiribati, Tuvalu, Fiji and the Torres Strait Islands,” she said.

“Along with their attendance, they also had opportunities for speaking at side events. I also spoke at one of those side events with the International Indigenous Peoples’ Organisation.”

Maria said that over her many years attending COP meetings, she had seen Pacific Islander voices grow louder and more effective.

“This time, NGO voices were very loud, as was the voice from people from the Pacific region.”

Maria said she remained concerned that governments of industrialised countries, including Australia, were “talking the talk, but not walking the walk” when it came to climate change.

“There was a sense of joy at this meeting that they finally agreed to a Loss and Damage fund but, unfortunately, we are still fighting for climate justice and there is a long way to go,” she said.

“For the people of the Pacific, it’s not just about rising sea levels, but also about inundation and the saltwater coming up from underground, destroying water tables and food supply.”

Anna Nuariki, from Kiribati, was a delegate to the COP27 meeting with the PCP group and said the advocacy training she received from the PCP helped her to use her voice effectively in Egypt.

“I have been involved with the PCP for about six years and it has developed my advocacy skills through their support in allowing me to attend former US Vice President Al Gore’s Climate Reality Training in Queensland for a week in 2018,” she said.

“In providing us with opportunities to tell our stories to politicians in NSW and the Catholic college in Manly, it empowered me to crack the shell I have been locked in and to be confident to advocate and tell our story to the world about how the climate crisis is affecting the lives of the people of Kiribati.

“The training in leadership skills conducted in Kiribati by PCP and the opportunity to lead the youth leadership workshop have given me courage to advocate on the climate change impact to my own people.”

Anna said her first experience of speaking up in advocacy for her homeland came during her Climate Reality Training in 2018.

“I was really disturbed when Al Gore never mentioned the impact of climate change in the Pacific during his presentation,” she said.

“So, I ensured that I talked to him face to face afterwards. I shook hands with him, introduced myself and my country and told him how disappointed I was that his presentation hadn’t included the Pacific.

“I could feel my voice pushing me to keep advocating and fighting for my people to be heard so others would notice how much they suffer the consequences of the climate danger they have not created, but which is created by developed countries.”

Anna said she believed the creation of the Loss and Damage fund at COP27 was a success for Pacific nations.

“However, it is disappointing that they are ignoring the roots of it all – greenhouse gas emissions,” she said.

“I believe that Pacific Islanders need to attend these world meetings for they are at the frontline of the climate crisis. It is important to have their collective voices to push on this issue, to fight for their people and the place they call home.”

Good Samaritan Sister Catherine McCahill said she was delighted that the support of the Congregation for the Edmund Rice Centre, and through it the Pacific Calling Partnership, was bearing such abundant fruit on the world stage.

“It’s very important that the voice of the Pacific and Indigenous peoples is heard at these international meetings,” she said.

“Our position has always been that it is better to support the Pacific Islanders and Torres Strait Islanders to attend themselves, rather than have people speaking on their behalf.

“It’s part of our call to stand with the Pacific people, to amplify their voice, and it’s part of our deeper, ongoing commitment to caring for all creation.” 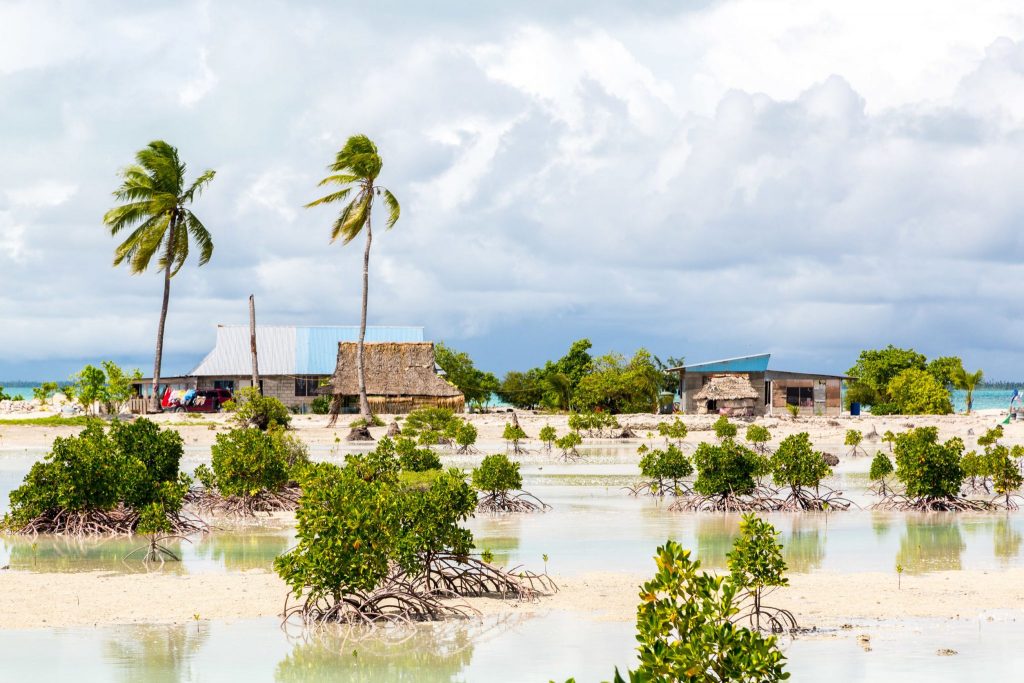