The Good Samaritan community welcomed four new Oblates last month in a beautiful liturgy at St Scholastica’s Chapel in Glebe. This was the first Oblation ceremony held in New South Wales since the start of the COVID-19 pandemic, writes Debra Vermeer.

The new Oblates came from Oblate groups in Glebe, the South Coast and the Blue Mountains. They had been undertaking a program of formation and preparation for some time.

Moira Anderson said the Oblation ceremony on August 20 was “a beautiful occasion”.

“It was a really lovely ceremony, watching everyone reconnect in person. It was wonderful to have something to celebrate after all this time,” she said.

Moira, who lives at Shoalhaven Heads, had been almost ready to make her Oblation when the pandemic hit and lockdowns ensued. 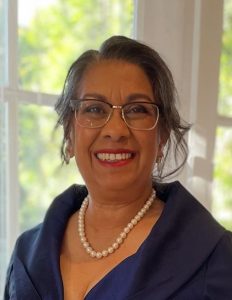 “Actually, the waiting made me stronger,” she said. “It reinforced things for me and it meant that I didn’t feel rushed on the journey. Slowing down the journey was, in hindsight, a gift, because it’s a huge commitment you’re making, to get up each day and try to live by the Benedictine guidelines.”

Moira’s first contact with the Sisters of the Good Samaritan was about 30 years ago when her children attended St Michael’s Primary School in Nowra. Later, she started working at St John the Evangelist Catholic High School where the founding principal had been a Sister of the Good Samaritan.

“I didn’t get to meet her as she’d moved on but every now and then, a Good Samaritan Sister was assigned to the school,” Moira said.

“One of the biggest influences on me was the spiritual formation courses held by the Catholic Education Office in Wollongong. That’s where I met Sister Anna Warlow SGS. She brought a real Benedictine spirituality to the retreats, which stuck in my head and in my heart.”

Together with fellow parishioner Liz Nimmo, Moira began holding ‘Come and See’ sessions once a month in her local parish, which included spiritual practices such as lectio divina, mandala-making, meditation and prayer. Liz became a Good Samaritan Oblate, but Moira didn’t feel it was for her at that time.

“Later, Liz invited me to an Oblate meeting and I felt like I was at home, that this was where I needed to be,” Moira said. “It’s been a really lovely journey with that group where I’ve always felt very comfortable.” 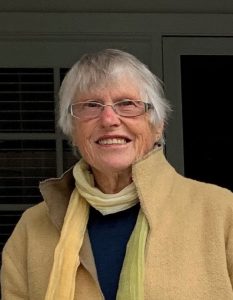 Barbara Davidson from Leura in the Blue Mountains described the Oblation Ceremony as “a wonderful, special experience”.

“To be honest, I was totally overwhelmed by it all,” she said. “I could not believe the way I felt. It was so wonderful.”

Barbara first came into contact with the Sisters of the Good Samaritan through Sister Jacinta Shailer SGS, who was holding Benedictine spirituality and cosmology groups in the Mountains.

“I went to her groups for a number of years and then Jacinta introduced me to Sister Veronica Griffith SGS and suggested that I’d be a good candidate to become an Oblate,” Barbara said.

Due to the pandemic, her journey to become a Good Samaritan Oblate took four years.

“So, I’ve been knocking on the door for a long time,” she said.

“I’ve been going to the Lawson Oblate group and I got to know other Oblates. It’s been wonderful. It brings you closer to God. I feel I’ve probably lived the Benedictine way most of my life. I’ve always been prayerful and I have prayed the Prayer of the Church, so this just felt like a final step, making it all come together.”

Asked what her hopes are for her Oblate life, Barbara said: “To grow and grow. I might be 84, but I’ve still got a journey in front of me.”

For Paul O’Shea, the pandemic-induced delay in becoming an Oblate added to the beauty of the Oblation ceremony.

“The journey is as much a part of the whole thing as the Oblation,” he said. “And when we got to the Oblation, it was a beautiful afternoon, done as the Sisters always do, with wonderful attention to detail.

“The Oblation confirmed what I’ve been living these past few years.”

Paul began his association with the Sisters when he started working at Rosebank College, a Good Samaritan Education school in Five Dock.

“Before that I had some idea about the Benedictine tradition, but no formal contact of any kind,” he said. 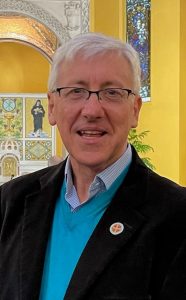 Paul’s interest was piqued in 2018 when he spent some time with the Manquehue Oblate community, an intentional lay community in Chile, which is part of the Benedictine family.

“I spent about 10 days with them and it was life changing. I found that what binds them together is their Benedictine spirit. That’s where I discerned that Benedictinism was not just for the cloistered and professed monastics.”

Through his work as Dean of Ministry at Rosebank, Paul became familiar with the Rule of Benedict and the Good Samaritan story. He said the prayer and liturgical aspects of Benedictine life were already a part of him.

“The Liturgy of the Hours has always been part of my prayer life,” he said. “Liturgy has always been the air I breath. I love it. And then I discovered lectio divina which I also love.”

It was Sister Christine Manning SGS who asked Paul if he had ever considered becoming an Oblate, and he felt it was the natural next step.

Paul joined the Glebe Oblate group, which was meeting at Rosebank College once a month, and began his journey towards Oblation.

“They are a very supportive and wonderful group of people,” he said. “I see three main components as I move forward – lectio, community, and being sustained and mentored in that community.” 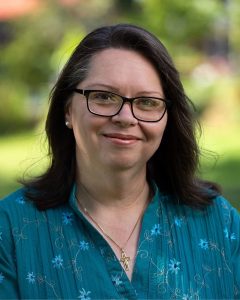 The Good Sams just kept popping up in the life of Loretta Brinkman, from her first contact with Sister Glenda Bourke SGS, who taught her Year 8 Religious Education at John Therry Catholic College in Rosemeadow, to contacts with Sisters when she worked for the Diocese of Wollongong and the St Vincent de Paul Society.

“But what really kicked off my association with the Good Sams was forming a friendship with Beth Riolo during the World Youth Day 2002 Pilgrimage to Toronto, Canada,” she said.

“She invited me to be part of a program being offered by Catholic Education Wollongong. Sister Anna Warlow SGS was a key facilitator and I loved it.

“I always say that my Good Samaritan-Benedictine education was started by stealth, because it really started by getting to know people who were living the Benedictine life, rather than any formal instruction.

“I think I kind of absorbed it all. And I remember one day reading a Joan Chittister book on the Rule of Benedict in the 21st Century and thinking, ‘this all sounds very familiar to me’. And I realised that’s because these women had witnessed to it in my life for years.”

Loretta continued spending time with Good Sams, including visits with Anna Warlow who was at that time ministering in Three Springs in rural Western Australia. She also worked with the Good Samaritan Oblates in Melbourne, where she met Sister Anne Dixon SGS and later had the opportunity to visit her in the Philippines where she is working.

“The Good Sams kept popping up everywhere I’ve been and I’ve always found them to be such amazing, generous, courageous women,” she said. “When I understood the Rule and the spirituality of the Sisters, all these women made sense and it felt right for me. It was a good fit.”

Loretta made the decision to explore the Oblate path while she was working on the mission team for Good Samaritan Education. She joined the South Coast Oblate group, due to friendships and long connections there, and now, based in Wagga Wagga and working in Mission for Calvary Hospital, she mostly joins the meetings via Zoom, together with another Good Samaritan Oblate living in Wagga, Susan Stubenrauch.

She said being an Oblate was also a good fit for her vocational call to the single life, which she was convinced of from a young age.

“I’ve yearned for something to make a commitment to that isn’t consecrated life, and making the commitment to become an Oblate and live life under the guidance of the Rule of Benedict and the Parable of the Good Samaritan was perfect for me.” 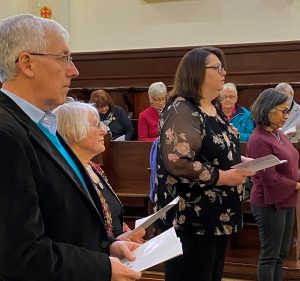 Sister Veronica Griffith, the NSW Oblate Coordinator for the Sisters of the Good Samaritan, said it was a delight to receive the new Oblates after such a long wait during the pandemic.

“It was a beautiful day and it was lovely to see everyone all together, with their families and friends, for this special occasion,” she said.

“They’ve all had an Oblate companion walking with them on their journey, and the support of their local group leaders and members. It was lovely to see the day finally arrive for them.”

Ann Chatham was also to make her Oblation last month but two significant deaths in her family at that time saw her postpone to a later date.

If you would like to know more about Good Samaritan Oblates or to find out more about connecting, email the national Oblate Coordinator: gsoblatecoordinator@goodsams.org.au 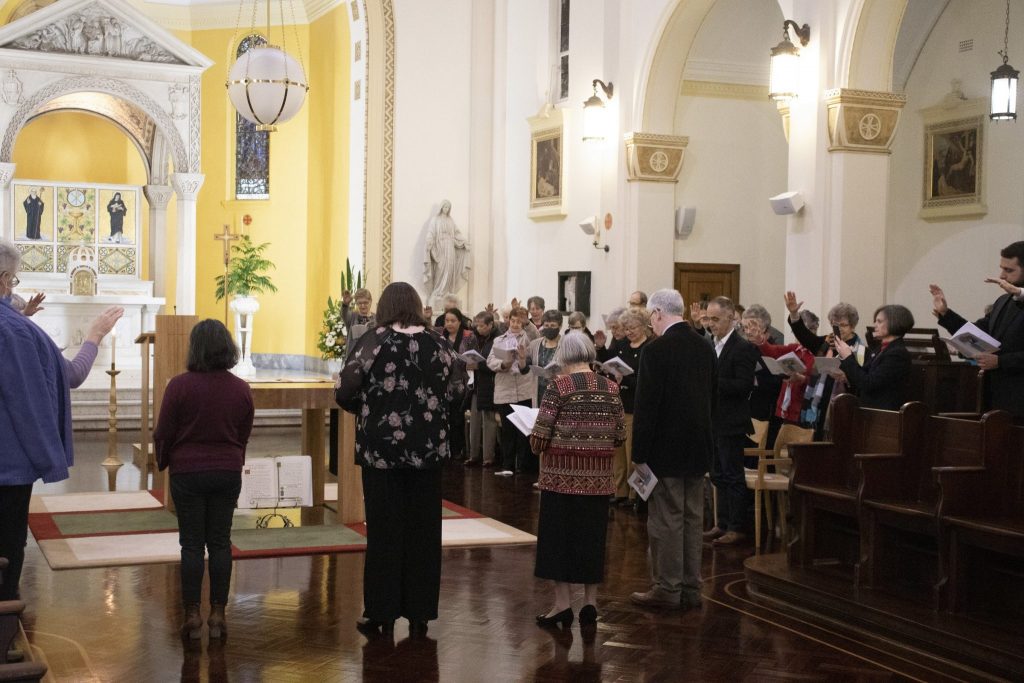 It takes courage for us to be loving critics

Listening to the Voice of Creation, listening to Country
Print Article The Good Oil Index