The refurbishment of Rosebank Chapel and Cemetery at Five Dock has been a long and joyful process that began in 2009. On January 11 this year, the last of the pieces of furniture were delivered for the refurbishment of St Mary of the Angels Chapel. The result beautifully identifies the Rosebank Heritage Precinct for the Sisters of the Good Samaritan and Rosebank College.

The process has been guided by Good Samaritan Sister Elizabeth Brennan, whose liturgical expertise helped to ensure continuity between the past and present.

Principal collaborators on the project were Mr Tom Galea, former principal of Rosebank College, and Dr Paul O’Shea, Dean of Ministry at the college, the design team of Craig and Wendy Taylor and Teagan Crean of Red Blue Design, and Nick Pedulla and his team, who crafted the liturgical furniture and created objects of great beauty. 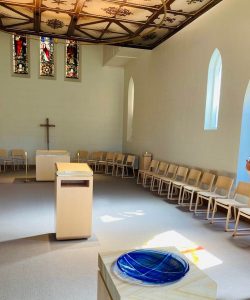 “The primary pieces are those that will become sacred over the years to come as we, the People of God, do the ritual acts of touching the water and remembering our baptism (font), proclaiming God’s word and allowing it to take us beyond ourselves (ambo), blessing bread and wine, offering thanks, praise and intercession and experiencing solidarity in communion (table),” Elizabeth said.

What was previously known as the Visitors’ Chapel, off the main chapel, has now become an intimate, beautiful setting for private prayer.

“The three foci in this space are the tabernacle from the Sisters’ chapel at Arncliffe, the Book of the Word used at college liturgies, and an altar stone, one of several, brought to Australia by Archbishop Polding,” Elizabeth said. 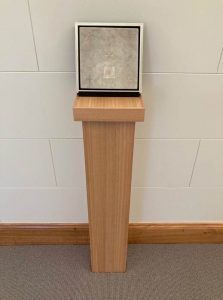 “As far as can be ascertained from information in the Freeman’s Journal (3.4.1880), this altar stone from the Sisters’ Pitt Street altar graced the Rosebank Chapel from 1880-1965. When the writer lived at Rosebank in the 1970s this altar stone was kept in a sacristy drawer. Well might we reflect on the numbers of people over the years, who have been gathered into one and partaken of the Body and Blood of Christ around this precious stone.”

At the cemetery end of the visitors’ chapel a stained glass window of The Good Samaritan from Arncliffe has been installed with its original dedication to the deceased children of St Magdalene’s Retreat.

Three other stained glass windows have been newly designed by the internationally known artist, Paddy Robinson, and installed in the main body of the chapel, allowing sparkling light to pour into the sacred space. 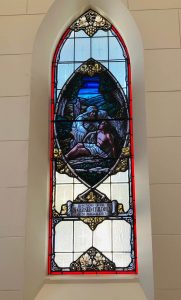 The large, new window has been placed into what was a door into the chapel from the original convent while the two smaller windows on either side of this were discovered hidden in the structure during the refurbishment.

“Together they make a glorious design of the journey, in Christ, of all who have been part of the Rosebank story,” Elizabeth said.

The cemetery, adjacent to the chapel, was active from 1879-1899. Thirty-eight Sisters are buried there, including two Poor Clare Sisters (one of whom was the abbess) who were too poor to buy grave plots. In 1945 the remains of M Scholastica Gibbons RSC (Co-Foundress) and M Agnes Hart SGS (a foundation Sister) were translated from Rookwood Cemetery to Rosebank to be buried with the earliest sisters.

The youngest Sister to be buried in the cemetery was Aloysius Cassidy, one of the great-aunts of Carmel Bambridge SGS. Aloysius went to school at Rosebank and was the sister of Agatha Cassidy SGS. In her short time in the Congregation as a Professed Sister, Aloysius worked at the Parramatta Orphanage; she was 19 when she died. 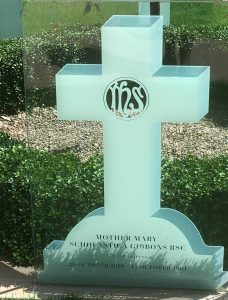 Her sister, Agatha, was the first Australian Sister to enter the Congregation. She was the founding principal of Rosebank and designed the ceiling in the chapel, which is now delicately lit. She was principal at Rosebank during three different terms.

Reflecting on the sacred burial ground that is the cemetery Sister Clare Slattery SGS writes:

A unique possession of Rosebank is the little cemetery which is the resting-place of our nuns … The simple stone crosses with their brief inscriptions … give to this little enclosure a tranquil sense of peace, serene harmony and eternal joys. (The Wheeling Years, 1957)

The history of Rosebank Chapel and Cemetery has been enriched with the completion of the Rosebank Heritage Precinct. “It is a significant site, which enshrines treasured memories and fosters prayer and worship,” Elizabeth said.

With thanks to Sr Elizabeth Brennan SGS and Dr Paul O’Shea, Dean of Ministry at Rosebank College.